Waiting Game: Turnquest Forced To Hold On For Sign Pm Will Give His Support 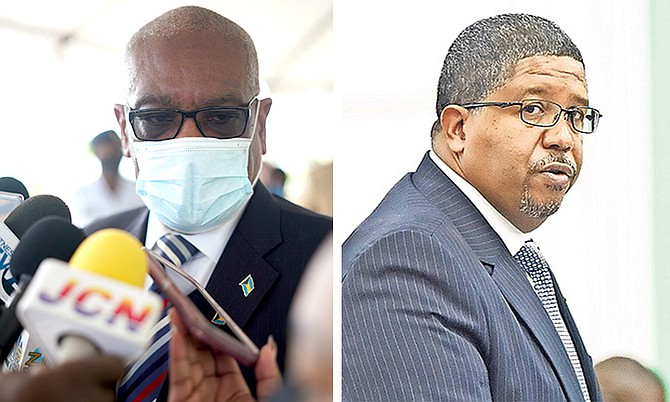 PRIME Minister Dr Hubert Minnis yesterday broke his silence over allegations of a $27m fraud levelled against Deputy Prime Minister Peter Turnquest saying Cabinet is “deliberating” over how it will handle the situation.

In the face of calls for Dr Minnis to either fire Mr Turnquest or demand his resignation, the Prime Minister did not give any insight or explanation of what Bahamians could expect from his administration on the issue.

He was asked if he planned to launch an official investigation.

“No, it’s a court matter right now and (the) Cabinet is deliberating,” Dr Minnis told reporters. “We’ll get back to you as soon as (the) Cabinet completes our deliberation and discussion.”

When asked whether there was concern from his office that the allegations represented impropriety in his Cabinet, Dr Minnis repeated that officials were mulling over the situation.

Asked if he was concerned the allegations against his second-in-command would hurt his party’s standing in the next general election, Dr Minnis said the electorate was aware that his administration faced many challenges since taking office in 2017.

“I think the people know exactly what we’re doing. The people know our heart. The people know the challenges we faced in terms of Irma when we first came in. We were challenged with Hurricane Irma. We were the first government to have embarked on an air evacuation from the south to ensure that there were no deaths during that hurricane and in spite of that, an economic programme continued to move forward. Then we were challenged with Dorian and in spite of that we continued to move forward.

This is the first time Dr Minnis has spoken of the allegations since they surfaced last week. He spoke to reporters following a grant ceremony by the Small Business Development Centre at the Gladstone Road Freight Terminal.

Pressure mounted on Mr Turnquest over the weekend from members of the Progressive Liberal Party who demanded answers from the government.

“…The accusations of a conspiracy to defraud a foreign investor of $20m have been in the public domain since 19 November 2020. Neither the Prime Minister nor the Free National Movement chairman has had a word to say in the deputy prime minister’s defence,” PLP leader Philip Davis said in a statement.

Former State Legal Affairs Minister Damien Gomez, QC, called on the DPM to resign as he felt the accusations of fraud have implications for The Bahamas.

“Surely, the government should at the very least make a public assurance that its relevant agencies have become engaged and that they are each performing their legal duties, including contacting the US Justice Department to ascertain what accounting evidence it or any other government department (such as the IRS) might have to assist our local functionaries in their investigation and making a similar request of the principal of the companies that have made these most serious allegations,” Mr Gomez also said.

Mr Gomez said this is not a matter that can be compromised, and the public has every right to expect the investigation to be transparent and fair to both the accused and the accusers.

The deputy prime minister hit back at allegations levied by two companies controlled by Fred Kaiser, a Canadian businessman with whom he had previously enjoyed a long and close relationship, by saying he was “appalled” that his name had been dragged into a dispute with another “former business partner”.

That business partner is Captain Randy Butler, chief executive of Sky Bahamas, which was forced to cease flying last year after the Bahamas Civil Aviation Authority refused to renew the air operator certificate that was required to carry fee-paying passengers. Mr Turnquest, though, noted that he is not named as a defendant in Mr Kaiser’s statement of claim – only Captain Butler.

Implying that the dispute has nothing to do with him, Mr Turnquest said last week: “The writ does not name me as a defendant, but makes several allegations in its statement of claim that are categorically false.

“I deny these false claims. I am appalled that my standing as a public servant made calling my name in this dispute between my former business partners worthwhile. There is no room for that kind of misuse of our judicial system in our society. I am confident that the facts will defend my integrity once presented.”

Minnis is loyal to no one - unless, of course, you’re brown nosing like Renward Wells.

He deludes himself into thinking people can see or know his heart but only God can see the heart. People pay attention to actions. The actions speak volumes. A lost and very petty dictator who can’t take criticism, doesn’t know how to speak to the press or for that matter how to speak at all and ready to knife anyone in the back that he perceives is a threat.

One other thing we know about Minnis is that he doesn't have an ounce of common sense or financial sense. In fact, when it comes to financial sense, he doesn't know a debit from a credit. You only have to recollect his very dismal performance during past budget debates in the HOA to realize he's basically financial illiterate outside of knowing the balances in his own personal bank accounts.

The Grand Lucayan debacle in which Minnis was personally responsible for plowing millions and miliions of dollars of money borrowed by his government is but one shining example of Minnis's complete lack of financial sense. And to think our country is now, for all intents and purposes, without a minister of finance. Can't wait to hear which of his other corrupt cabinet ministers Minnis appoints to replace Turnquest.

I doubt very much that the investigations will be TRANSPARENT......good joke though!

I doubt very much that the Investigations will be TRANSPARENT...good joke though

The lack of respect for the Bahamian people is just sad. It is unfathomable that K.Peter Turnquest is still our Minister of Finance. The disdain, lack of respect and lack of interest for the Bahamian people from this Government is constant. People may not remember all of what they have done, but we will surely not forget how this Government made us feel. At this moment, the disrespect is palatable.

Our most incompetent Minnis unleashed on us Renward "Chain Dog" Wells as minister of health and rumour has it he is seriously considering appointing either Wells or D'Aguilar to take on the DPM role in addition to their current ministerial responsibilities. As for who will be the new MOF, apparently Minnis still has not been fully persuaded by wealthy and powerful forces behind the scenes that no currently sitting FNM MP is anywhere near suitably qualified for that role, not that Turnquest ever really was himself.

Word on the street has it that financially illiterate Minnis may have to assume the position of MOF and appoint an unelected minister of state for finance to handle all of the nuts and bolts finance functions that would ordinarily be handled by the MOF. But the big problem so far is that only the likes of the most renowned corrupt undesirables in the private banking, insurance and brokerage sectors of our economy have been lobbying Minnis for the appointment of minister of state for finance. And when it comes to not respecting serious conflicts of interest, we all know which highly corrupt CFA in the private financial sector tops the list.

What's a Colony of 1200 Out Islands, Cays, and Rocks of 450,000 comrades out islanders to do, now that we're saddled with an even more useless prime minister without a portfolio with no specific responsibilities to fire a minister crown? Shakehead once for upyeahvote gives whole new meaning to a prime minister released from cabinet responsibility portfolio, twice for not makin' this latest stack red crap up.

K Peter Turnquest is a liability to the party, he needs to go and 2 others need to follow! then the party may stand a chance of winning the next general elections once it ditches itself of some infections it picked up in the last elections.

If wishes were horses the PLP would still hold the reins of office in the Bahamas. The fact that they don’t is the reason why we have these outlandish and foolish comments being said about our Prime Minister and Deputy Prime Minister.

The PLP members and their dim witted acolytes cannot wait for some frivolous event from which to make a mountain out of a mole hill. This incident is nothing more than a storm in a teacup. When the evidence emerges those who have been quick to talk will once again have to put their tails between their legs and slink away as usual under a rock.

The DPM must remain in office. The PM must continue to lead us to the promised land of economic development, balance of payments equilibrium, zero inflation and high employment.

The DPM will continue to lend his skills in banking and commerce as he guides our nation to fiscal probity.

And the FNM will continue to be the party in power. PLP types can cast aspersions all they want but that means nothing. The man and woman in the street know that they are a pack of crooks chomping at the bit to put their hands in the nation’s purse. This will not happen.

God Bless Prime Minister Minnis. Long may you live and serve our nation.

You are The PM

@topdude regardless of the outcome of this case the FNM hasn’t produced anything substantial showing us what they have accomplished in their 3 1/2 years. No freedom of information our health and education systems are collapsing. You stated ,” the PM must continue to lead us to the promise land of economic development” I don’t know if me and you live in the same country but this same The PM has put thousands of people out of business with these lockdowns which are meant to be a last resort but it’s the first thing they do, so how does that help our local economy and why did this government open up the borders to tourist? Because they’re still too dependent on tourism, this country is rich with natural resources why haven’t they thought about utilizing them to boost our already starved economy. You’re just a hardcore FNM who can’t accept the facts and try to make it seem like this government is what this country needs BS.

I’m no PLP or FNM supporter I say ditch them both because every election they sell us dreams and never complete not even half of what they outlined. so I don’t know about you but I tired getting hurt by the PLP and FNM it’s time for someone new.

He is the PM not a hardcore FNM