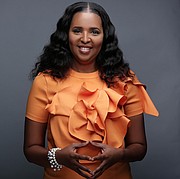 Grand Bahama businesswoman Ysa Valdes is expanding her business communications empire, with an online television channel, and has taken her brand to two additional islands - Abaco and Bimini.

Ms Valdes, of Infinity Communications Ltd, launched Dove103.7FM nine years ago on November 11, as the first gospel radio station in the northern Bahamas. Then, a few years later came The Compass newspaper.

The new online television channel, called Dove Newsbrief, is streamed live on YouTube and Facebook. There are plans to establish her own streaming platform in the near future.

The channel provides daily local, national, international and sports news, and the newest talk show, Make It Make Sense, hosted by Darren Cooper on Thursdays at 11am.

“We’ve built a committed, vibrant team and the ‘Dove Nation’ is strong. We are a part of this community,” said Ms Valdes.

“We remain invested in these communities and we are grateful that the ‘Dove Nation’ has stuck with us all of these years. You’ve listened to us and we are listening to you — bringing you what you want to hear and watch as we continue to grow together.”

Ms Valdes said the road to this point has been both exciting and challenging. She said that they have survived a number of major storms, including Hurricane Dorian, which crippled several radio stations for months.

Dove, she added, has managed get back on air and is now trying to stay afloat during the COVID-19 pandemic.

“We know we have a purpose in the community and we are aware of how much our listeners depend on us to get them through the day — whether it’s just to hear an inspiring word or an uplifting song at that very moment when they need it the most,” said Ms Valdes.

“We are continuing with re-establishing our brand in Abaco and we are going to launch in Alice Town, Bimini. We have decided to add another component to our media conglomerate with live stream television — starting off by streaming through YouTube and Facebook and then going on to use our own streaming platform.”

Ms Valdes is excited about what the future holds for Dove, and the partnerships that are being formed in the communities through its philanthropic arm, especially during these difficult times.