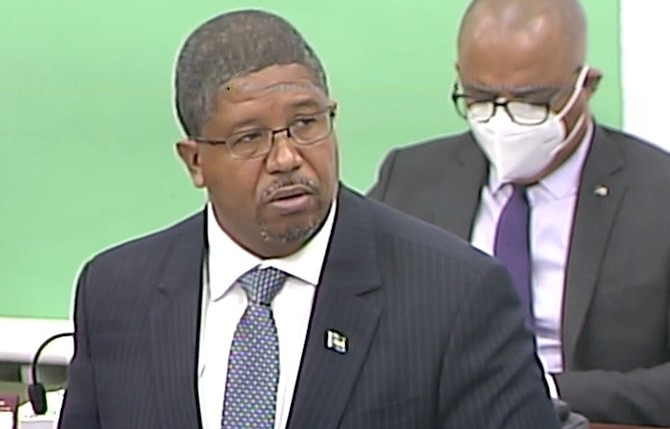 Peter Turnquest has resigned as Deputy Prime Minister and Minister of Finance.

In a statement, Mr Turnquest hit out at the “unfounded and untrue claims” against him and said he would continue to serve as the Member of Parliament for East Grand Bahama.

The move comes after a statement of claim filed in the Supreme Court last week claimed Mr Turnquest and his Sky Bahamas business partner Captain Randy Butler, “dishonestly caused” Alpha Aviation and Advanced Aviation to “pay away” $20.68m and $5.917m respectively to the airline via “some kind of bogus loans”. Mr Turnquest is not listed as a defendant in the lawsuit.

“It has been my great honour and privilege to serve my country in public office,” Mr Turnquest's statement said. “I have done so with total fidelity and adherence to the tenets of our democracy and the Westminster conventions by which we are guided.”

“As consequence of all the unfounded and untrue claims that that have been circulating in the mainstream press as well as in social media, to protect my family, and in the best interest of my Constituency and my Party, I have offered my resignation as Deputy Prime Minister and Minister of Finance to the Prime Minister with immediate effect.

“I will continue to serve out the term of my election as the Member of Parliament for East Grand Bahama for whose prayers and support, I continue to be most humble and grateful.

“My focus as Minister of Finance has been to deepen our democracy by enacting legislation that reformed and modernized the management of our economy and the public's finances. I am confident in the team of young men and women at the Ministry of Finance who will continue that work.

“When I met with the Prime Minister today I informed him that while I am confident that once the allegations against me has been fully ventilated through the courts my reputation of transparency and accountability will be vindicated, I did not want a private business dispute, which occurred prior to my taking public office, to become a distraction to the Government, or to the important national work that lies ahead.

“Our nation is undergoing an unprecedented time in its history. We are fighting a global pandemic, resulting in unprecedented economic challenges and a difficult road ahead to maintain stability and recovery. We must all continue to commit to doing our part.

“I look forward to putting this matter behind me and continuing to encourage modernization and reform in our country to which, I remain so grateful for allowing me to serve.

“At an appropriate time, I will have more formal comments to make in regards to the circumstances of the allegations made against me and the actors that have perpetuated it.”

Prime Minister Dr Hubert Minnis said he had accepted Mr Turnquest’s resignation and thanked him for his service.

“I have accepted the resignation of the Minister of Finance the Hon. K. Peter Turnquest, effective immediately,” Dr Minnis said in a statement.

“I thank Mr. Turnquest for his service to The Bahamas, especially during the COVID-19 pandemic.

“I will serve as interim Minister of Finance and will make a substantive appointment in due course.”

"We won't have him to kick around anymore"

More resignations are required......too many corrupt politicians in this country

Mr. Minnis the colony's prime minister without portfolio cabinet responsibility is about to announce a new finance minister, emself.
No plausible it went down as simple, I does voluntarily resign. Mr. Minnis can now say, was an entire cabinet of his redcoat colleagues who fired KP. Can't just make this up, now, can you? Executing a sit-down to chat with Mr. Minnis, not exactly a smart political career move for a red coat cabinet appointee. Just go asks Brent and Dr. Duane, nor was it for the other 5 junior redcoats?

In the best Westminster tradition.... Tribune, PLEASE find a current photo of Mr. Turnquest, don't be so bloody lazy. Lead by example!

An embarrassment to East Grand Bahama.

Not to mention our entire country!

Why not an actual news story, instead of a long string of self-serving quotes? The story does not even detail the alleged misbehaviour. Does anybody actually work at this newspaper, or do ya just publish whatever “official statement” lands on the doorstep?

Well, I hope other ministers in the FNM and The PLP take not on what to do when their turn comes up. We will see.

When Bamsi dorm burned down, someone should have resigned but didn't.we all can go on and on about so called ministers

Brave was hoping he would stay so he would have something to beat up his gum about.. it will not happen...

dont worry, he will still beat up his gum. other higher ups are probably breathing a sigh of relief it wasn't them who get caught. We still waiting on the BPL and Oban papers. nothing has changed in this country in 53 years. The black man just take over and start repeating what he see Massa doing

".. in the best interest of my Constituency and my Party, I have offered my resignation as Deputy Prime Minister and Minister of Finance to the Prime Minister with immediate effect."

... yer another sad day in the History of our Country ... nothing to rejoice over.

Maybe now he will have more free time and can figure out where the VAT money gone.

Well I don't feel sorry for him. Now only if more could be forced to resign from both sides

Just a bunch of black crabs doing what they do best, tear one another down.

I only hope that all you crabs commenting, when someone makes a serious allegation against you that has yet to see a day in court, won't mind the other crabs acting as Judge, Jury & executioner as they have in this case, and will be as dignified and act as honorably as Turnquest has.

So true. Sadly the comments show the ignorant state of our country who will judge someone guilty on allegations that do not even name him in court documents.

Yet, it shows Turnquest puts others above himself. Just thankful for his service.

Your ignorance must be so blissful. And It certainly does serve to explain the sad state of affairs our country is in today thanks to the warped attitude many like yourself have towards rife corruption at all senior official levels within our political system.

@tribanon, "Appearances and trustworthiness do matter, especially on the world stage for senior government officials who are responsible for the finances of a country. This is an inescapable fact and it is for this reason that Turnquest should have by now submitted his resignation as both DPM and MOF. It is the only honourable thing he can do to remove the dark cloud his predicament has left hovering over the Minnis-led administration and our country" He has done the honorable thing but people like you are still not satisfied, next you'll be suggesting hemlock or something similar.

Ok. . .he resigned. . .they are doing what they are doing. . .it makes no sense to us, but "mayhaps", I suspect, they have better information than we have!!

It for dang sure can't be on the information given to us so far? That's accusing me of "killin" BARNEY. . .and yinna demanding that a person accused of "murderizin" a person is arrested and charged!!

Don't ya think that a credible investigation is in order before yinna arrest ma?