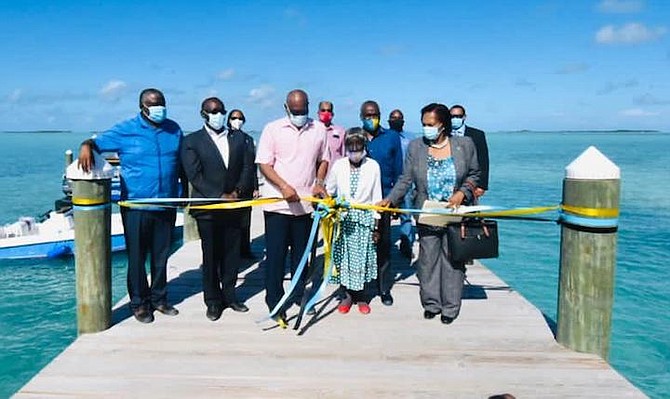 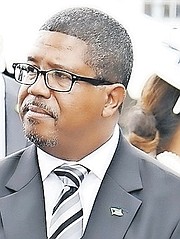 ANNOUNCEMENTS about who will be the new minister of finance and deputy prime minister could come this week, Prime Minister Dr Hubert Minnis suggested on Friday.

“I will announce very soon,” he told reporters in Exuma. “What I can say is that I most certainly won’t remain in the ministry of finance, I can say that with certainty. Tomorrow (Saturday) I’m travelling to Cat Island and I will meditate and discuss with some of my colleagues and by the time I come back sometime this week we will have to make announcements moving forward.”

Dr Minnis, meanwhile, spoke after marking the opening of a new dock at Barraterre that replaced the government’s old docking facility.

Dr Minnis said the previous structure, which was constructed in 1990 using timber, was in poor condition and some of its sections had a high risk of collapse.

“The economic stability of the community of Barraterre is highly dependent on the construction of a new and improved docking facility,” he said.

SJK Engineering and Construction was awarded the contract for the dock.

“The project was completed in a timely manner,” Dr Minnis said. “Even though we had promised a grand celebration upon the opening of the dock, unfortunately the exigencies of the pandemic curtailed these plans.”

Dr Minnis also participated in a groundbreaking ceremony hosted by Caribbean Paving Solutions, a subsidiary of the Bahamas Striping Group, which launched its first ever mobile Asphalt Plant in George Town, Exuma.

In addition, Dr Minnis said a contract of $8 million was awarded to CPS for preparing and rehabilitating roads in mainland Exuma.

“The works include clearing of verges, scarification of existing road surface, placing of new limerick base material, raising of low lying flood prone areas, installation of drainage culverts and concrete headwalls, sealing of the roads with 1.5” thick hot mix asphalt wearing course and installation of signs and new striping and road pavement markers,” he said. “The length of the contract is 52 weeks.”

Dr Minnis said plans are also underway to design and construct a new terminal building and a new crash fire rescue building at the Exuma International Airport. He said tender documents have been issued for the project and three bids have been received.

“The bids have been evaluated and the evaluation report submitted to the Inter-American Development Bank for their no objection,” he said. “The Air Terminal Building at Exuma International Airport will be transformational and forms part of a comprehensive redevelopment programme. The architect for this project is Alexiou & Associates.

“The terminal building will accommodate multiple tenants including government regulatory agencies such as Customs and Immigration, the airlines (and) the Airport Authority. Approximately 12 retail outlets will provide ample opportunity for local Exumians to participate in a meaningful way in the economic output of the airport. The landscape design features will be tourism and marketing focused to promote the tropical environment of the beautiful island and cays of Exuma.”

looks like it's ok for Bahamians to travel inter-island now.

Dr. Minnis says,"Tomorrow I’m travelling to Cat Island and I will meditate and discuss with some of my colleagues and by the time I come back sometime next week we will have to make announcements moving forward.” Perhaps Prime Minister Minnis could meditate on whether his silence on this oil drilling is helpful to the people of The Bahamas. If he truly meditated with an open mind and intellect the answer would be a resounding "No".

“The bids have been evaluated and the evaluation report submitted to the Inter-American Development Bank for their no objection,” Minnis said.

Should the PM be arrested and fined for failing to follow his own rules on social distancing? 🙄
Then putting poor mama in Exuma at risk.😶

... yep! Exuma on lockdown, no one can get in or out UNLESS you are the PM, with his crew looking for a photo op while not socially distancing, but they did not want you to get together with family for Thanksgiving! No hypocrisy there!

Is Exuma lockdown or not. ? or the competent authority has the right to go where ever he pleases.??

Social distancing, travel without any quarantine or tests,domestic health visas and lockdowns are for the majority of Bahamians. If you are a politician you can do whatever you want. Not only that but your salary and perks are guaranteed. The people's PM.

This PM, who is having thousands of Bahamians arrested and fined for breaking HIS emergency Covid19 rules, is, in a photo, breeching "social distancing" himself. LOCK HIM UP. FINE HIM. FIRE HIM.

Tribune should watchout with the use of the word "fraud".

Was it pleaded in the writ? Take a look, if not, then it might be prudent to cease using it and appoligise for its use.

You're got to be kidding. Look it up in a good dictionary. LOL

Take this photo to The People's Court, it is after all, THE PEOPLES' TIME, 😂🤣😂🤣😂. MINNIS MUST GO! Sick The Covid 19 "Ambasdadors" on him, PLEASE, PLEASE!

Yinna just don't have enough sense to fill up a soda bottle cap! Doc if ya listening to this group. . .IGNORE THESE FOOLISH PEOPLE AND DO WHAT YA MUST DO FOR THE BETTERMENT OF THIS NATION!! I hate to hear some of yinna talk. . .SO MUCH DUMB NONSENSE. . .WHO YINNA MAR DEM IS? Or some er yinna take after yinna Pa? Shaming this nation in the face of the world with yinna lame brain foolishness!!

My most entrenched Government House source has it that Brent Symonette be's heading back for another stint as a substantive crown minister for The Colony of 29 Most Popoulaces Out Islands, 661 Inlets, and Cays and 2390 Rocks..... possibly as DPM or Finance Minister, maybe hold both portfolios. Shakehead a quick once for upyeahvote, a slow twice for not?

Let's all pray Minnis does not go off half cocked and appoint a bureaucrat like former central bank governor Wendy Craigg as state minister for finance. The Tribune has already touted rumours to that affect floating around everywhere. Wendy Craigg just doesn't have the backbone or vision necessary as was so painfully obvious in the way she mishandled (for years) the corrupt lending activities at BOB that had been made known to her very early on by her own inspectors within the bank supervision department of the central bank. Had she done her job properly back then, BOB's losses heaved on to the backs of Bahamian taxpayers would have been much less than the $400 million plus and counting.

As MOF Craigg literally would be an unquestioning dutiful puppet of Minnis and his more senior cabinet ministers no matter how misguided their wishes, directions and instructions to her might be. Her personality is such that she avoids dissention and confrontation like the plague and that's just not the type of MOF we need in these most difficult and challenging times. And we certainly don't need a MOF who would simply cave to every wish and direction coming from the likes of the IMF, World Bank, IDB, etc. no matter the extent to which they would likely be most harmful to our country.

But even worse still than Wendy Craigg as MOF would be Marlon Johnson as MOF. And of course, worst of all would be that corrupt and highly conflicted CFA guy whose puppet master would love nothing more than for him to be in charge of the country's finances.

Wells as DPM would be another poor judgement call by Minnis but not nearly as serious a one as Craigg, Johnson or the corrupt and highly conflicted CFA guy as MOF. Minnis's big dilemma is that he has surrounded himself with the dullest crayons in the box because of his own insecurity and demands for undying loyalty above all else, especially backbone and smarts.