Garreth Looks Forward To The Competition In College 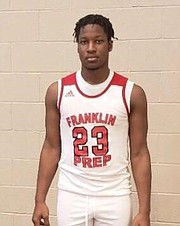 After participating in a few Amateur Athletic Union (AAU) Basketball Tournaments this summer, Garreth Edgecombe is eagerly looking forward to competing at the collegiate level.

The 2019 graduate of Galilee Academy has enrolled in Franklin Prep Academy in Clemson, South Carolina, where he’s expected to face some competition from his former Temple Christian Academy Suns’ team-mate and close friend Deyton Albury.

Albury is now enrolled at Believe Prep Academy in Rock Hill, South Carolina, after he graduated from Sunrise Christian Academy in Bel Aire, Kansas where he starred in both basketball and football.

For Edgecombe, the first week at school has been quite a transition.

“It feels great,” said Edgecombe, the son of Theola and Gary Edgecombe. “I was referred to the school by Dwight Dean, who played for Jordan Prince Williams when he attended the school.

“I’m not going to lie, I’m playing with some top tier players, who are getting ready for college. We’re still learning each other’s game. So it’s an adjustment.”

At 6-feet, 3-inches, Edgecombe is expected to play the small forward position, but while he’s finding time going through the play book, he will have to wait until next week to juggle his classroom schedule.

Each day, Edgecombe has to go through a routine of getting up at about 7am, eat breakfast, head to the gym for an hour practice, come home, relax and then at 5pm, return to the gym to run their plays and scrimmages.

Edgecombe and Albury, both 18, reunited with coach Jamal Smith in July and August to play in a series of AAU games to prepare them for the collegiate ranks.

At Franklin Prep, Edgecombe said they are confined to their dorms because of the coronavirus and are only allowed to go out until they are directed by their coaching staff.

“We also have to take a coronavirus test every Monday,” he stated.

“So I have to keep up with that. It is to keep us safe, so I don’t mind. Everything is going great right now.”

Once they start playing, Edgecombe said he’s looking forward to competing against Albury.

“Our coach hasn’t confirmed the schedule just yet, but I think it would be a good experience when we get to play against each other,” he said. “On court, we have to handle business, but off court, that’s my brother. So it would be a great experience to go against him.”

During the summer, Edgecombe said he enjoyed teaming up with Albury and coach Smith in the AAU Tournaments.

“That helped me to get my legs back under me and prepare me for prep school,” Edgecombe said. “The AAU really helped me to condition my body for Franklin. I had to work every day to get ready.”

Now that he has gone through some drills at his new school, Edgecombe said the coach has already seen his weakness in his left hand and ball-handling skills. But he admitted that it’s nothing he can’t fix before he decides where he will end up playing college next year.

For now, he just wants to make his presence felt at Franklin Prep.