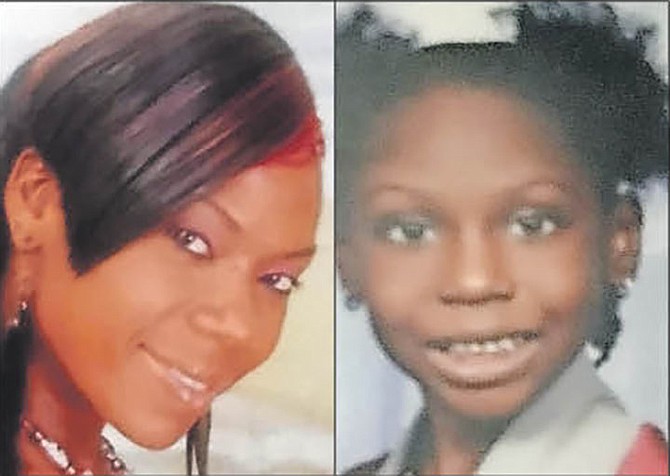 COMMISSIONER Paul Rolle yesterday revealed that several police units were searching for the suspect who had murdered a mother and daughter hours before they were killed.

Thirty-year-old Alicia Sawyer and her eight-year-old child Ednique Wallace were found dead in their Nassau Village home on Monday morning.

It has been circulated on social media, but not by police, that the mother made a complaint to police regarding the suspect.

Asked about this and what protection police offer when such complaints are made, Commissioner Rolle didn’t confirm or deny directly if Ms Sawyer had made a complaint before her death.

He said: “The short of it is there are certain provisions in law that prevent where they’re living in the same home… Again, how much then do... the police then to do in those kinds of thing? You talk about protection. The protection is to try and catch the culprit and on that night when the incident happened we had several units all over the city trying to find this culprit and in the midst of that he was able to return to this place... well I assume... which we suspect that he returned and then we had what took place. Which is sad.

“All night they were out in search for him and until we found him. At the time when we found him, unfortunately this woman was found dead. But unlike when you have two persons in the home, they were not living together. When you have two persons in a home, one abuse the other we separate and then we could get those separation and get Social Services involved and get a court order forcing them.”

A man was taken into custody late Monday in connection with the double murder.

At the crime scene, police press liaison officer ASP Audley Peters said the incident appeared to be domestic based on the evidence.

Back in July, the police chief noted a decrease in domestic matters in the country. This is in contrast to Social Services Minister Frankie Campbell telling reporters in June his ministry had received increased reports of domestic abuse and child abuse since the COVID-19 pandemic began.

Asked if there would be awareness campaigns on domestic violence, Commissioner Rolle added yesterday the police are going to be doing “media blitz” on the issue. He added, however, this is not only “a police issue”.

“Everybody in this community has a duty to ensure the safety of everybody in this community. As police officers, we are paid simply to pay full time and attention to this. That’s something everybody has an obligation to ensure safety for all in the interest of community, but we lead this and as the leaders, yes, I’m going to be and you’ll see some more of that and trying to encourage our community people to get involved.

“We have issues now there are matters that come into the contact of the police we do referrals. We do referrals, but persons then have to be willing and so you have those community partners and I would hope they would step up and also talk more about it.”

The truth be told WE the persons living in our communities need to take care of their communities. When certain crime goes down in our communities right in front of our eyes we turn our heads, we say nothing and do nothing but then we expect the police to come in afterward and make our communities safe for us. People today are so very ANGRY and quick to harm another. Heaven help us all.

Well Mandella, what you have said seems to be very difficult to do... it could be difficult to report persons you have been living close by for many years and find them to be well-behaved people... puts me in mind of many years ago after I first started working, many outstanding citizens always used to say, "Ignorance of the law is NO excuse." Then I always wondered WHY the law was NOT taught in schools!!!
I am inclined to believe that all these terrible crimes happening are fulfilling what Jesus said in Matthew chapter 24, that everything would continue to become worse until He returns..

They were searching all over for him. But not at her home or the street on which she lived.

Sloppy execution by the Police. They should have maintain a presence at the point where a crime was most likely to occur, having known the threat to the deceased..

Is it me or he is very incoherent? Imagine him giving orders, "I need 10 officers to go to East Street and conduct a review of all businesses in Old Fort Bay to catch criminals who areifting weights at the gym at our station".

This is why we can't solve crime. It's interesting that he said domestic violence had decreased during this whole Covid-19 lockdowns and curfews, when globally it went up. Mr. Campbell's information is consistent with what we know from the rest of the world. I'm not sure what numbers the Commissioner saw. Maybe he got it from the same source that gave him talking points for the media here.

On this case, most people would assume that it eas.likely he would show up to the same address where the complaint was made. It would make sense to have a patrol car stationed there in the event he showed up. This is not rocket science.