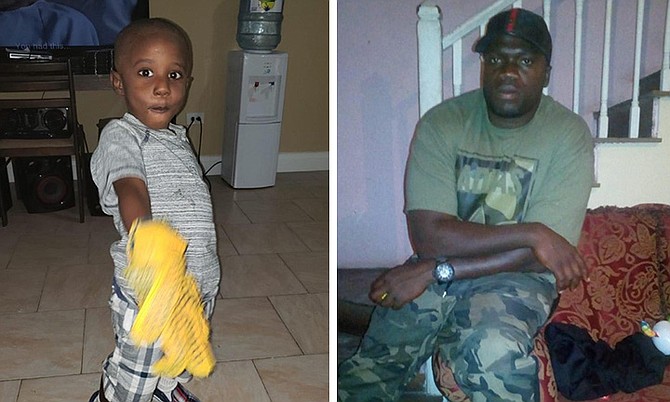 Four-year-old Jeremy Green and his father, Jamoric Green, were killed in the shooting.

“MUMMY get the doctor, please get the doctor,” were the last words of a four-year-old boy who was shot and killed in Eleuthera on Saturday while he was in his father’s arms.

His father also died in the incident. The wife and mother of the victims who witnessed the fatal shooting unfold said she is now in fear for her own life.

Recalling the horrific incident, the woman whose name has been withheld, told The Tribune she and her family were inspecting a property they were building in the Rock Sound settlement when two gunmen ambushed her husband.

“I thought it was my brother coming, but then I saw my husband telling them ‘Don’t shoot, I have my son in my hand, please don’t shoot,’” she said.

“After they opened fire, I thought it was only one (gunman). I come out the car and I started to run, (but) when I started to run, I saw the next one. He started to shoot at me, but I run into the bush and I heard when they speed off in my car with my other kids inside of it.”

Police said shortly after 5pm on Saturday, officers in Eleuthera were informed that two people had been found unresponsive on a property in Rock Sound. When police arrived, they found the man and boy with injuries. The two of them were later pronounced dead.

Later that day, officers received additional information concerning two children who went missing in a white vehicle. Detectives from the Criminal Investigations Department in New Providence were then dispatched to Eleuthera. When they arrived, they discovered the white vehicle on a dirt road north of Rock Sound. Police said the two infants were found in the car unharmed.

While officials have not released their identities, family members say the victims are 35-year-old Jamoric Green and his four-year-old son Jeremy Green.

Yesterday, the young boy’s mother said she is still in shock.

“As they sped off with my kids in the car, I heard my little boy crying so I called his name. He was laying on his side but when he heard my voice, he turned around and he looked at me and said ‘Mummy get the doctor, please get the doctor.’

“I tried to lift him up because he said ‘Lift me, lift me,’ but I saw he was in pain so I say ‘no baby I can’t lift you.’ I know they say don’t move them when they get shoot because you don’t want the bullet to move, so I told him no mummy is going to get the doctor. He said ‘Okay, okay get the doctor’ and he stopped crying.”

Jeremy’s mother said she ran to a nearby residence to try and get help but when she got there, she ended up pleading for an “hour-and-a-half” for help that never came.

“I ran and bammed on her door, but she didn’t even want to let me in,” she claimed. “I said, ‘My husband and my son up there, somebody shoot them please they need help, my son tell me to come and get help.’ But she said ‘Hold on, who you is?’ So after she wasn’t opening the door, I push myself in her house and I said, ‘Please come help my son... he get shoot in his thigh.’

“I been there pleading for help about an hour and a half and they did not go up there to my son and my husband. My son got shoot in his thigh. From my understanding, my son bleed out. If (someone) did come there and tie his leg to stop the bleeding, he would’ve been alive today. That’s sad.”

The 32-year-old said she could not describe the amount of pain she is going through right now.

“‘Mummy get the doctor.’ I couldn’t believe that come out my four-year-old son’s mouth. He was looking at me, I didn’t even have to turn him over. When he heard my voice, he turn and he look at me... only God one knows what I’m going through right now to witness all of that.”

The woman said police found the missing car with her other children in the “back of the bush” with all of the car’s doors closed and windows screwed tight. She said they were able to track them using her iPhone, which she left in the car.

“When they bring my little girl to me she was drenched in wetness where she was sweating in the car. The officers said they buck up in the car and all. They had my kids way deep, deep in the back of the bush. (They) left them to die.”

As for her husband, she described him as a “hardworking man” who was devoted to his family.

His wife said on the day of his death, Mr Green pleaded with his killers not to shoot him while he was holding his son. She added when the gunmen realised she had escaped unscathed, they were angry.

“I’m scared for my life,” she said. “I told officers I need to go under witness protection. I saw their body language. They were really angry I got away because I fell on my face.”

The woman added she also wanted to refute reports circulating online suggesting the incident was fuelled by a bitter love triangle.

“My mom told me people are saying I came over here with a sweetheart. That’s a lie. Me and my husband and my kids came together. We have been over here now two years living happily. I came out of Nassau for the same reason. Nassau is corrupt. I never know something like this could happen on the island.”

Insisting the online reports are “completely false”, she added: “That’s incorrect information and I don’t like that because what I’m going through, I don’t need that right now. I’m going through a lot. You know what it is to witness my son — my four-year-old baby — and my husband get kill? And they took my one-month-old baby boy and my one-year-old girl and was trying to kill me too. C’mon man, they are wrong. Everything they said is false information.”

Saturday’s killings marked the third incident in about three weeks where a child was murdered.

“Three innocent children are dead by violence in as many weeks,” she said. “This is unprecedented. This cannot be tolerated. This is unbearable. The minister must now say what is this government’s plan to counteract this plague of murder now recklessly targeting children.”

She said children must be protected.

“This spate of deadly violence is a shocking signal of the social deterioration in our country. The government must now understand that there must be a reach across the political divide to bring a non-partisan, all hands-on deck merger to combat this scourge. We are talking about our beloved country. Our precious children are now in the firing line. The political leveraging is not working and people are dying.”

Police said they have taken a number of people into custody in connection with the double homicide. They are also appealing to anyone with information that can assist with their investigation to contact the police at 919, 911, Crime Stoppers at 328-8477 or any police station in Eleuthera.

The Bahamas is suffering from a SERIOUS social identity crisis that is going to continue to worsen if not confronted by us. My questions are, "When did we fall so far morally?" and "Where is the line drawn to separate moral and immoral in an ever worsening social condition?"- I asked that question in a previous article, about violence that effected a mother and daughter last week, this is SAD! We as a country need to realise what we are doing to our Nation with all the is violence and STOP! Even worse its happening on the island now. Wake Up Bahamas. Talk to your families, Pray with your families, we have to do something to stop these situations. What happens to these creatures when they are caught, we certainly can't call them men. My God Bahamas! "Where has the good ole days gone?", "What are we doing to our Nation", "What is our Government doing to fight the Importation of Guns?" "Where do these unlicensed, unregistered, illegal weapons come from?", "???"...

My heartfelt condolences go out to this grieving mother and wife and her surviving children.

@DRIVER31 the fact that you have to ask where and when our people became so socially disconnected speaks volumes. Where were you living or were you in fact alive when the Columbian hitmen would rampage through our streets and neighborhoods during the Pindling administration time.

Where were you when those same Columbians operated with impunity from their base in Normans Cay a mere fifty miles from the Capital, where large sums of money exchanged hands and in jam jars and when the standard response from our politicians was "I don't recall," "Don't mind where I get my money from, or if I tief it" and "Principle don't put bread on the table."?

Where were you when Opposition members and Judges houses and cars were firebombed, drug money flowed throughout the country like water and our Nation was for sale?

All of this perpetrated on us and presided over by The Father of the Nation. And all of this leading us to where we are now by the compliance, consent, and the avaricious nature of the Bahamian People.

We have met the enemy and it is us!!

I am very sorry about this situation. It is very sad.

Tell it like it is Messenger! Ya reap what ya does sew! Most either don't or won't accept the facts....