Higgs High Not Enough In Loss 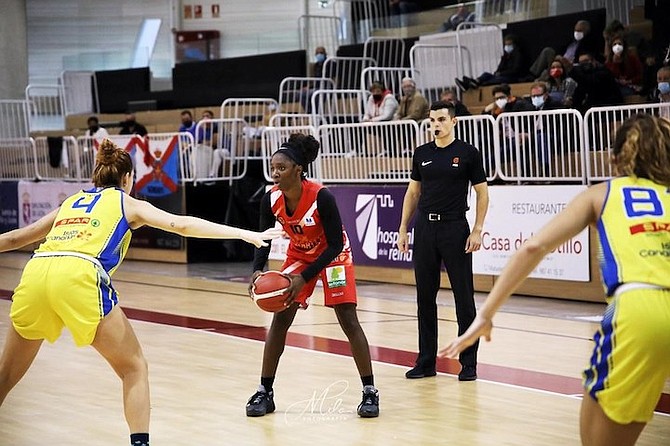 Lashann Higgs in action in Europe.

Playing in her fourth game in her rookie season overseas, the 25-year-old Higgs poured in 28 points on Sunday, but it wasn’t enough as Embutidos Pajariel Bembibre PDM fell 79-75 to Casademont Zaragoza at the Pabellón Príncipe Felipe (Zaragoza).

Her performance speaks for itself, but Higgs is not resting on her laurels.

“I feel as if there can always be more to improve on individually so that I can help my team in the best way that I possibly can,” Higgs told The Tribune after the game. “Every game is a learning experience for me so I just have to keep moving forward.”

Now at 1-3 and tenth place in the standings, Higgs and Embutidos Pajariel Bembibre PDM will be back in action on Saturday when they take on Cdad. de La Laguna Tenerife at home at the Bembibre Arena.

And based on what she’s seen in the league, Higgs feels there’s still a lot of room for improvement for Embutidos Pajariel Bembibre PDM, who has assembled a brand new team under coach Pepe Vazquez.

“We are a new team so we just have to take this as an opportunity to continue to improve collectively and continue to learn each other’s strengths and weaknesses,” she stated. “We can only continue to get better.”

Embutidos Pajariel Bembibre PDM was coming off a 79-69 victory over Spar Gran Canaria on October 3 when Higgs scored 22 points with six rebounds after losing their first two games of the season to Lointek Gerrnika Bizaia 70-45 on September 26 and 76-65 to IDK Euskotren on September 19.

Despite the slow start as far as their winning percentage is concerned, Higgs noted that the experience so far as has been a rewarding one.

“I believe that I’m starting to get the hang of things as a professional, but I’m always willing to continue to learn as much as possible,” she stated.

The Harbour Island, Eleuthera, native made the transition to the pro ranks this year after she completed her collegiate sting with the Texas Longhorns. She was in Kansas City in March with the Longhorns for the Big 12 Tournament when the coronavirus pandemic struck, halting all sporting activities around the world.

Now she’s looking forward to the rest of the season with great expectations.

“It’s just to continue to improve and work hard each and every day and continue to get better every day whether it’s individually or collectively,” she summed up.

With 27 more games left through the remainder of the regular season that ends on April 3, 2021, Higgs is confident that they can turn things around and make run for a playoff spot.