Stateside: How Long Will It Take For The Us To Recover The Ground It’S Lost In The Eyes Of The World? 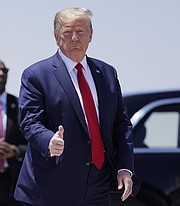 “I feel sorry for Americans,” a lawmaker in Myanmar told The New York Times recently. From Berlin, another Times reporter wrote that events in the US were “shaking fundamental assumptions in Europe about American exceptionalism”.

Many of those events that are shaking international faith in the US are political. You can choose from among the following and see if they diminish your confidence in the American ability to manage its own affairs or represent a stalwart force for good in the world.

The current American administration stubbornly and overtly continues to put at risk thousands of lives by holding outdoor political rallies where the safety prescriptions of its own experts are minimised.

US President Donald Trump continues to blather on about why “his” Justice Department should investigate and send to prison his predecessor, a supremely dignified man who literally set no foot wrong in eight tumultuous years in the fishbowl of the White House. And who, by the way, has just announced that he will campaign enthusiastically for Joe Biden.

The Trump administration persists in its attempts to corrupt both the American jurisprudence system by packing federal courts with inadequately qualified loyalists, partly in the hope that the President can somehow steer the upcoming election into the courts for resolution and that his appointees will tilt the election his way.

The Republican Party is one of America’s two major political parties. It continues to abet Trump in his misbegotten efforts to promote himself, while abjectly failing to stand up to his bullying control of the party. The venality of the American political system has rarely been so strikingly exposed.

Congressional efforts to support the sagging US economy are sabotaged by political gridlock in Washington. In the face of continuing high rates of COVID-19 infection and small business failures all around the country, little or no federal assistance to the newly unemployed and pandemic-shuttered businesses is forthcoming.

Trump is not the only reason the world’s confidence in the US seems shakier than at any time since the Second World War.

The Democrats are as guilty as Republicans in creating the partisan, corrupt political mess in Washington. Here’s an example: The change in Senate rules that permitted the GOP to essentially block President Barack Obama’s 2016 Supreme Court nominee was the direct result of actions taken several years earlier by then-Senate majority leader Harry Reid, who was eager to win Senate confirmation for hundreds of Obama-appointed judges. Now the Republicans are doing the same thing.

And so on. Political power in Washington corrupts its beneficiaries, just like it does in every other capital city in the world. But because America still sees itself and is seen by many as Ronald Reagan’s “shining city on the hill,” its descent into unseemly public and societal strife is magnified in the eyes of the world.

We seem to be witnessing the end of what has long been called “American exceptionalism,” basically the notion that the US is anointed as naturally special and superior, and that American military, cultural, political and economic power is inherently a force for good in the world. These precepts lead to the conclusion that the US does, and should, enjoy unique rights and responsibilities.

President Trump has shirked American international responsibilities with a sneer and a jibe. While his administration has actually done a reasonably respectable job of managing US international affairs at a working level, Trump has made headlines by flouting convention and acting like a clown far too often while seeming to bow before unfriendly foreign agents like Russia’s Vladimir Putin.

Perhaps damage to America’s reputation abroad will be limited once Trump leaves office, many outside the US may take some convincing that America can truly be again relied upon as a beacon of global hope.

Where did the notion of American exceptionalism come from? While some think it originated in this century, most historians seem to agree the concept got its real start as a justification for American actions in seizing what was left of the Spanish Empire after prevailing in the Spanish-American War of 1898.

As the final result of that quick and one-sided contest, Cuba and the Philippines were granted their independence from Spain, and strategic islands like Guam and Puerto Rico were transferred from Spanish to American control. Within 50 years, the US had tilted the military balance in two world wars against the aggression of successive German regimes and their allies. The last half of the 20th Century was America’s golden age.

Now what? Polls seem to show Americans are much less convinced than they were at the end of the Cold War of their nation’s exceptional nature. Faith in government is at or near all-time lows. Commitment to do the right thing internationally seems to be ebbing.

The dismissal from office of Trump in less than three weeks would help somewhat to restore international faith in the US. But the exercise of American power abroad, and its relationship to foreign direct assistance, may take some time to rebuild.

For some nations, that time may be too much time, with consequences as yet unforeseeable but almost certainly most unwelcome.

Mafia don or a soccer mom?

Does Amy Coney Barrett, President Trump’s latest Supreme Court nominee, remind you of anyone? For some observers, she is the female version of Vice President Mike Pence.

Like the Vice President, Barrett has deep Indiana roots. She appears, like Pence, to have profound and unflinching socially conservative religious beliefs, starting with but by no means limited to her oft-stated objections to legalized abortion and any public funding to support it.

There are a couple of noteworthy things about her public hearings on Capitol Hill. First, she so reflexively and woodenly avoids answering provocative Democratic questions that she reminds some observers of old-time Mafia bosses who invoked the Fifth Amendment of the US constitution to avoid incriminating themselves when they appeared before congressional inquisitors decades ago.

Barrett knows she will be confirmed this month by the pliant GOP majority in the Senate. Then, to listen to liberal pundits, the sky in the US will literally fall on American jurisprudence. Moaning and hand-wringing prevail among Democratic-leaning commentators. The high American court will soon have a 6-3 conservative majority, with five of the justices adjudged to be true believers in social conservative tenets.

The resignation to Barrett’s inevitable confirmation by Democrats is the other noteworthy element of the current circus of her hearings. Even most of the Democratic women on the Senate Judiciary Committee acknowledge they are powerless to resist Barrett’s inevitable ascension to the nation’s highest court. This represents a sharp contrast to the hearings two years ago of Brett Kavanagh.

Part of the difference is doubtless due to the scandalous allegations that besmirched Kavanagh. Barrett’s personal life appears honourable. Part of the difference may be also due to appearances. Barrett looks like America’s soccer mom. Kavanagh still resembles the dissolute frat boy he was depicted as being.

But part of the difference may simply be Barrett’s gender. While her judicial opinions reveal her conservative ideology, there is hope that as a woman, she will develop a perspective on the court that permits occasional compassion.

And, as she pointed out the other day, Barrett will be the only justice not to have graduated from Yale or Harvard law schools. A Notre Dame graduate and professor, she noted that while she respects those Ivy League bastions, her alma mater might be able to teach the others a thing or two about football.

A sense of humour isn’t the worst place to start.

Heady days ahead for the heat?

Finally, how about a little love for the Miami Heat? After their gritty loss to LeBron James and the Lakers in the NBA finals, the Heat are the insiders’ pick to dominate this decade.

With indomitable Jimmy Butler with the team for two more years to partner with emerging young stars Bam Adebayo and Tyler Herro, maybe all the Heat need is for league MVP Giannis Antetokounmpo to come to South Beach.

The Bucks star is a free agent after the upcoming season. Anyone want to bet against Pat Riley and Eric Spoelstra luring him to the land of sunshine and no personal income tax?

Not just trump. bush also damaged the US internationally. Americans have to stop electing morons. Simple.

But the real problem isn't trump or bush, the real problem is the people that support them. trump will more than likely be gone by January, his supporters will still be there, still voting for the biggest, dumbest a--hole available. And they breed. Lol. Way more than intelligent, woke folk....