‘$20m on sidewalks to give jobs for Bahamians’ 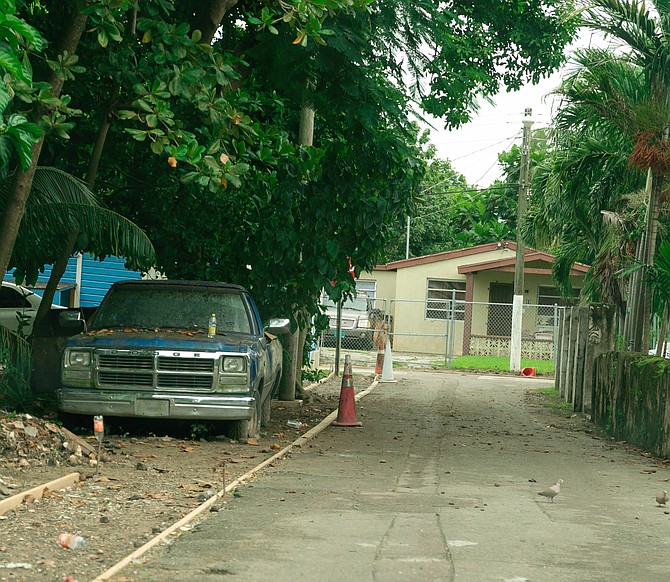 WORKS Minister Desmond Bannister says sidewalks are needed around New Providence and that an ongoing project to construct them has provided jobs for Bahamians during the difficult COVID-19 crisis.

The Minnis administration has implemented budget cuts as government revenues take a hit, prompting some to question why $20 million is being used for sidewalk construction when even the government’s food assistance programmes have received a reduction in funds.

Mr Bannister said yesterday: “Firstly, it means that in these difficult economic times the government is still able to provide jobs for many Bahamians. Secondly, sidewalks are desperately needed in a number of areas, and they play a vital role in providing a safe pathway for pedestrians to walk along the street separated from motorised traffic. This greatly reduces the risk of them being hit by a vehicle. It also helps with the pedestrian’s sense of safety, as there is more distance between them and vehicular traffic.”

The initiative is said to have provided work for some 200 contractors.

The Ministry of Works recently released a statement highlighting the experience of several contractors and workers who have been paid to construct the sidewalks.

Latorna McPhee, the owner of Landscaping and General Maintenance, said she was grateful to be able to hire eight young men to carry out the work.

“I’m grateful, one to God then to Minister Bannister for awarding me this contract in such a hard time. Before I got the contract, it was very difficult to provide for my family. There are a lot of people complaining and saying that the money could have been used to feed people, but I don’t think they notice how many people are employed due to these contracts,” she said.

“This opportunity is providing for so many different homes. I encourage the government to give out more contracts so we can boost our economy and uplift our Bahamian people.”

Earlier this year Deputy Prime Minister and Minister of Finance Peter Turnquest said the government would implement 20 percent cuts across institutions because of COVID-19.

The Ministry of Finance is expected to release its quarterly report at the end of this month and will host a press conference to discuss the state of the government’s finances then, Financial Secretary Marlon Johnson said yesterday.

Lucky 200 contractors who got a chance to get these jobs that were not given out openly and fairly and made aware of for the small contractors in general and not the chosen few to be able to apply for, the MOW touted eProcurement and suppliers registry is nothing but a farse and do not offer equal opportunity for all concerned to apply for certain opportunities given out by this government. $ 20,000,000.00 divided by 200 contractors equals $100,000.00 per contractor, they should all be smiling all the way to the bank.

When this was done by the PLP, it was implied that it was corruption by FNM operatives. Now that is done by the FNM, it is economic stimulus. It is really an economic theory developed by an English economist Keynes during the great depression. He advocated increased capital spending to drive economic activity.

An African American told a relative of mine this, Bahamians don't understand their system of governance. their taxation system and are not taught much in these islands. This is a perfect example of that.

Correction, Johnson is the acting Financial Secretary. Reporters here in the Bahamas don't know how senior civil servants are appointed or removed from office. All they do is print releases.

Would've imagined we Queen, done be showing much upset over the increased potential corruption that can surface whenever no-bid Willy-nilly $20 million contracts have become the norm by Her Majesty's red coats government?
Shakehead once for Yeah Comrade Cecil who handled the construction of the colony's first, largest, and only large scale expansion government's public schools must be lookin' down and thinking,' Twice for Not?

I assume there won't be any issues finding money for these items either.

Plp's same old story. They are trying to use the old saying they used in one of the elections. It was ," the FNM is spending on things and not people". This is boring and dull. If you take it for what it's worth, money is placed into the hands of people, capital infrastructure is accomplished, and the moral is up, the economy gets a boost. The plp are always trying to push that the FNM sp nda on things and not people. Come up with something new.

as long as we can find money on our health care infrastructure and other pressing capital works maters.

Banister what about the Government House has it been repaired???? Imagine all the rent money that can be saved.

People don't have food. Poor kids don't have access to education in this pandemic. Healthcare is poor or nonexistent in some parts of the country. But, we have an urgent need for sidewalks. Very interesting.

So, what's the truth here? Is it the creation of employment to hustle a few votes? Is it a distasteful way to steal money from the public purse during such tough economic times? Clearly, it's not because sidewalks are the most urgent item in the midst of a health crisis.

Good point on the construction of concrete sidewalks and flooding. The sidewallks being elevated and lower portions for homeowners, businesses access will channel rain water into driveways, entrances, yards and in these areas many homes use septic tanks in yards which should be of serious concern to all being flooded. Added to challenge is the highly traffic streets in these areas during heavy rainfall pushes flood waters further into yards. Before the concrete sidewalks and road widening there must be plans on overall sewage systems and effective drainage system.

The man is demented. Please put him in a straight jacket.

Where the f___ does Gov find cash for building side walks if it has no money for hospital beds, oxygen and hurricane reconstruction? This is definitely not government in the sunshine, more like repression on the furthest, darkest side of the moon.

How many votes does this so-called minister believe this wanton decimation of the Public Purse will garner him????

I don't want the PLP to replace the FNM, but can the FNM please have a change in leadership! The MP's in the FNM need a dose of testosterone!

The six most corrupt and/or incompetent members of the current FNM administration who absolutely must be pushed out of the door first for the sake of our country's future are:

. The Bahamas is in need of a hospital and a prison seeing many are sent to prison for minor offence.

But instead, Banister spends money on sidewalks.

So how much is spent on road-building every year? There are thousands of Bahamian students who travel to and from school on foot and use the sidewalks. With the restricted bus system even more find themselves having to walk along busy traffic lanes. And when you walk through residential areas where there are no sidewalks, the sides of the road are filled with potholes that are full of water during the rainy season, and many persons have witnessed persons jumping out of buses or private vehicles into puddles of water of slipping in mud pools. Who are those who think the construction of sidewalks are non-essential? But when a road is in a state of disrepair then what, what wat?

We change priorities around here like most change their underwear. Ridiculous. Government bleeds money on anything it touches. It bleeds the people to bleed money. Always has always will. But the people accept the mediocrity, fraud, graft, lack of legitimate governmental services,
and the limitations and restrictions placed on their potential by the elected.

An FNM supporter called in to the Morning Blend talk show on Guardian Radio this morning.

He said that this is an economic stimulus program and basically Bahamians don't understand how government works.

I just laugh at his comments.