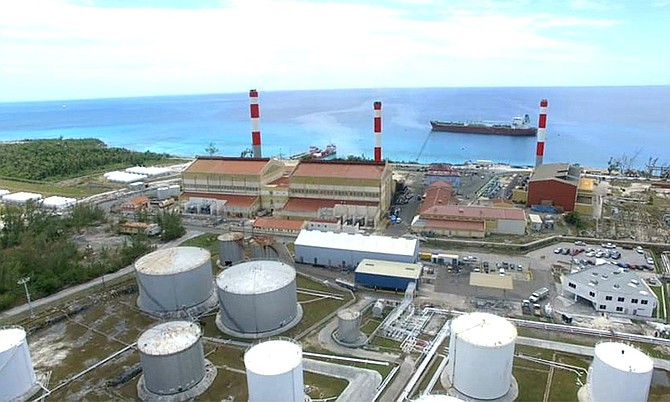 A Chamber of Commerce executive yesterday argued it will be "a sad day" whenever Shell's power plant deal is agreed because it goes against The Bahamas' pledge to fight climate change.

Debbie Deal, head of the private sector group's energy and environment committee, told Tribune Business that the proposed agreement to provide New Providence's base-load generation will lock The Bahamas into fossil fuels - including liquefied natural gas (LNG) - as its primary energy source for the next 20-25 years.

Questioning how this fitted with The Bahamas' commitments to the Paris climate accords, and the devastating effects these changes were already having on the country through more frequent and powerful hurricanes, Ms Deal also suggested any such deal would not help the country's goal of producing 30 percent of its energy from renewable sources by 2030.

"I sent a What's App message to the Economic Recovery Committee and the committee saying this is a sad day. I'm part of the National Climate Change Committee, and we are in the process of doing reports that need to be done honouring the Paris agreement.

"Our National Energy Policy from 2014 said there will be 30 percent renewables by 2030. Then we were talking about how to reduce our energy consumption to reduce the amount of fossil fuels we use. The IDB had given the Government a $170m loan to do renewable energy in the Family Islands and some transmission work," she added.

"Here we are as a country; we are in the middle of climate change, which is alive and well and living in The Bahamas. We are suffering from all these storms, have all these planes going through our air and waters, and have carbon emissions into the ocean.

"Yet here we are. We have an energy company [BPL] and a government that has signed up to an energy deal for 25 years with fossil fuels. Never once has Shell come to the Bahamian people or government saying we are a company that can do alternative energy. Not once have they said we're looking to do 30 percent of our energy in renewables."

Ms Deal was reacting after Tribune Business exclusively revealed yesterday that Shell North America believes it is just "weeks out" from concluding nearly two-year negotiations with the Government and BPL for New Providence's new power plant, having been selected as the preferred bidder in early 2018.

Some sources suggested the proposed deal may be discussed at today's full meeting of the Minnis Cabinet, adding that there were concerns about the price Shell may be seeking for the energy it will sell to BPL under their proposed power purchase agreement (PPA).

That could not be confirmed, though, but other contacts argued it would be impossible to meet New Providence's base load from renewables as Ms Deal - who has clashed several times with the Government over the New Providence power plant project - is suggesting.

Gerard Van-Ginkel, Shell North America's project director, told Tribune Business that negotiations with BPL and the Government were "at the precipice" of reaching a conclusion following nearly two years of negotiations and the parties now needed to take that final step.

Signalling that all sides are close to completing a long-running, complex negotiation, he told this newspaper: "I think that we're weeks out. I think that when we last spoke we were targeting to conclude in the third quarter.

"That has just passed. Despite all the challenges caused by COVID-19 and lockdowns, I think in the next few weeks we will be in a position to see this come to a conclusion with BPL and the Government."

Desmond Bannister, minister of works who has responsibility for BPL, declined to comment on the status of negotiations when contacted by Tribune Business. However, Dr Donovan Moxey, BPL's chairman, echoed Mr Van-Ginkel by telling this newspaper that "we have made progress" although he declined to detail the outstanding issues or give a likely completion timeline.

"We're still negotiating," Dr Moxey said of the Shell talks. "I'm not prepared to say exactly where we are, but this negotiating process has been moving forward and we have been making progress. I'm not going to give a timeline, but we have made progress from January to now and are doing everything we can to get this wrapped up as soon as we possibly can."

One source, familiar with developments in the power plant talks and speaking on condition of anonymity, said they understood that the pricing, commercial and other terms required for an agreement were largely in place, and the deal now just required approval from the Minnis Cabinet.

"The basic deal has been done for a while now," the source said, "and it has to get Cabinet approval." While the finishing line now appears to be in sight for all parties, Mr Van-Ginkel and Shell North America indicated to Tribune Business they remain eager to get there as rapidly as possible.

"There's a certain degree of urgency that needs to be recognised in delivering this project," he told this newspaper. When asked what he meant, Mr Van-Ginkel replied: "We look forward to moving this on and getting on with construction in the New Year.

"We've been at this since 2018, and now we're in the fourth quarter of 2020. We've had a tremendous amount of global change over that period. It's Shell's view that the project is at the precipice, and it is time to take the next steps and move into a conclusion.

"We've all worked hard to get to this point, and are hoping to take it the rest of the way. We believe we've put forward a compelling proposal, and it's up to the Government and BPL to decide how they want to proceed."

If you hadn't noticed, solar and wind are now the cheapest way for islands to get power.

Climate change is all well and fine, but the Bahamas still has no clearly defined Alternate/Solar energy policy. It is also very expensive. LNG does burn cleaner than bunker C and Diesel, particularly via turbines. The grid needs turbines for stability.

there will be no new direction, just deals that profit a certain segment of government

And fixing billion dollar hurricane damage is free? (from the climate change from burning fossil fuels)

What stability did Abaco have post Dorian by the way?

Once again we can all see plain as day just how much of a truly loathsome hypocrite Minnis really is. Only months ago he stood before a general assembly of the United Nations to address our nation's very genuine concerns about climate change. Simply unbelievable!

Another dire warning from the United Nations concerning the imminent threat of climate change. Sound familiar ?

What climate change? Stop the fear mongering FYI there is no noticeable sea level rise. Want to destroy the environment? Use wind and solar power and then try to bury the toxic trash as landfill after 10 or 20 years of use in the Bahamas..

Yes, all the forest fires are a myth. Australia did not have hundreds of wild fires, we do not see twice the number of named storms we did 20-30 years ago. Get your head out of the sand, or at least don't drag down people who didn't cause climate change with you.

Are solar panels toxic? Yes! A good reason why society must use less overall power.

despair: The complete lack of hope. Bahamas and despair are now synonymous.

Many buzz words are tossed around to cause confusion; they are phrases like 'climate change', 'carbon foot print', 'green energy', 'global warming', 'agenda 2030' and the rest of them. The hard facts are that no town or city can go entirely green without incurring massive costs and carbon emission outlay which defeats the purpose of reducing carbon emissions. Electrically operated vehicles, refrigerators, televisions, etc will all be monitored and controlled by AI via the internet.

However the private sector has funds, and generally will do solar to reduce / eliminate power bills. While BEC BPL see this as loss of captive revenue it should be seen as offsetting growth of utility needs and infrastructure strain. And all the while you have the insidious overarching Government inclination to "control" Canadian electrical code handles the rules quite well. There is no need for the URCA/Min of Works/BEC trifecta of limitations and blockades.