A scene from the film.

Virtual events have been the go to for the organisation during recent times as it believes it must carry out its mandate even more now than ever.

Samita Ferguson, president of the group, said the event was necessary to give those who have been feeling hopeless a ray of light.

“The inspiration behind my latest CHAMPS Pathway of Healing was based on the dynamics of the period in which we presently live," she said. "There are so many wounds that persons are walking around with; wounds of of job loss, grief due to deaths, financial woes, mental instability, there are people who are longing for hope, people are left broken as a result of these facets just mentioned.

“When tossing with the theme, my mind resonated on the short film Broken, which I wrote and produced and was filmed by Gary Wong. I immediately thought about the purpose behind the film which was to feature various families who went through a period of brokenness and who also went through a process of healing, hope and love. I said to myself the message is still relevant. If one's mindset is to shift and not allow their circumstances to deter or to state their final end; they too can be healed. There is a saying that trouble does not last allows; and we quote on numerous occasion that God gives us beauty for ashes,” she said. 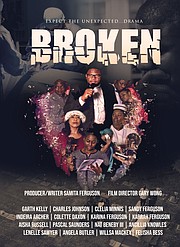 “Pathway of Healing” featured the cast from “Broken” speaking about the film and how it resonated to periods in their lives in which they were broken.

“One cast member named Indira Archer shared how during the period of the film she was still going through a process of healing, healing that was needed as a result of a losing her husband three months prior to the airing of 'Broken' and then Pastor Pascal Saunders, another cast member, shared how he had experience losing a family member around the time of the film as well,” Mrs Ferguson told Tribune Religion.

The featured speaker of the event was Keisha Russell, who also shared her experience of being broken after losing her spouse.

“Keisha lost her husband this year and four months later her mother. The aim of the event was to once again bring hope and tranquility and to impact lives in a positive way; to remind individuals that we will all go through our trials and pain, but if we trust in God he will never make us ashamed and that he will bring us out. This is the time and the season to put one's hope in Abba Father, who is a miracle worker and promise keeper,” she said.

Mrs Ferguson said she received a tremendous amount of feedback from those who tuned in. What was most heart warming for her was those who said they felt encouraged and uplifted.

“The main takeaway is one will weep due to the pathway of pain; but at the end of the journey if one preserves the pathway to healing will be more accessible. As a result one will readily change their narrative and at the end of the road they will say; 'look at me I did not cave in I did not give up. I kept pushing; I was broken but not shattered, I am still standing unashamed and unafraid’, she said.

Another good thing to come out of the virtual event was the response to the film.

“The response was tremendous, person were wanting more and are requesting part two; also one of our Caribbean islands wants to feature it in their women ministry group. I am grateful to the father above that the message was received and lives were uplifted and transformed. This is the purpose behind the story and the goal for future films like 'Broken'. The cast and film director were tremendous; we are excited about other projects that will transpire in the very near future,” she said.