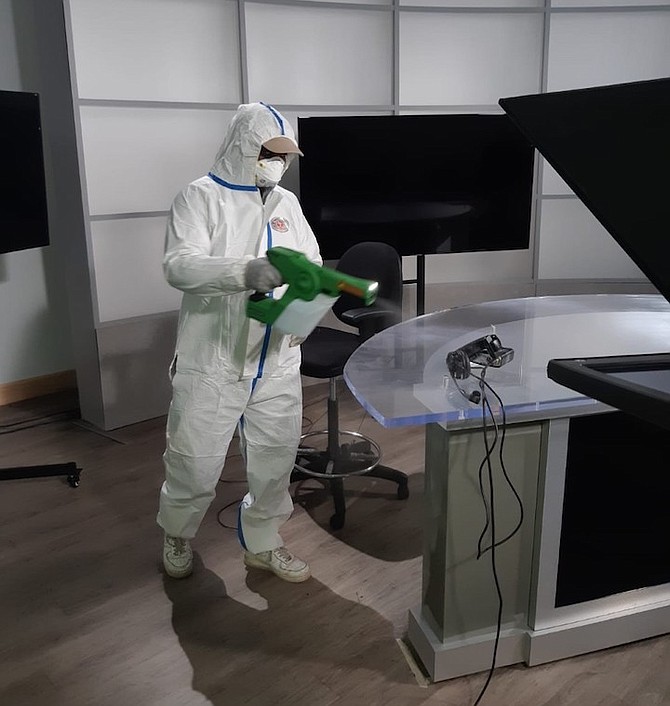 SANITISATION under way at ZNS in Freeport.

ZNS employees in Freeport are very concerned that proper protocols were not taken by management when a staffer who became ill at work last week tested positive for COVID-19.

According to a reliable source, the staff is upset and concerned about how the handling of the incident. "Employees are fearful of being fired for speaking out and voicing their concern to management," said the source.

The Tribune attempted to contact Dino Rolle, president of the Bahamas Communication and Public Officers Union (BCPOU), on Wednesday and again on Friday about whether complaints were filed by employees. However, efforts proved fruitless up to press time.

Last Wednesday, an employee became ill at ZNS and tested positive for the coronavirus on Monday, and was subsequently hospitalised. The individual was discharged this week from the hospital.

The Rev Glenroy Bethel, president of Families For Justice (FFJ), accused ZNS management of failing to follow proper protocols. He said employees exposed to the individual were not sent home to quarantine for 14 days and tested for COVID-19, and that ZNS did not shut down for sanitisation. He also stated that there has been no contact tracing requested or conducted.

When contacted this week, deputy general manager of ZNS Northern Service Darren Meadows indicated that protocols were followed. He said the office was sanitised after the employee left work and before the individual had tested positive for COVID-19, so there was no need to shutdown ZNS.

Staff was informed, he said, and told they could get tested but felt there was no need to because they were comfortable and satisfied with how the incident was handled.

Mr Meadows said executive management at the Broadcasting Corporation of The Bahamas and the BCPOU in Nassau were also informed of the incident.

Rev Bethel criticised the union for its silence and insisted that employees are not satisfied with the way things were handled.

“The employees at ZNS have some serious concerns that the managers and executive staff are downplaying the seriousness of this matter and their health, and they are concerned,” he insisted.

“The union is not doing anything about it and have not come out publicly to address the matter. All is not well, and they (ZNS) are in breach of the protocols, and the deputy general manager has decided to downplay by telling the press that all is well and that there is no problem with the staff, and that is false, and we challenge it.

"How can you have a person infected with COVID-19 being in the hospital for a week, and did not follow protocols to have people tested and quarantined, and do contact tracing here in Freeport?” Rev Bethel asked.

“Our Prime Minister is in quarantine taking heed and telling the country to do the same, then how is it that ZNS executives in Freeport decided to allow employees to continue to work in those conditions?" He asked.

Failing to follow protocols not only put ZNS workers at risk but also the Grand Bahama community, stressed Rev Bethel. He noted that FFJ would continue to agitate if protocols are not followed in the case of those ZNS employees in Freeport.

“ZNS Freeport refuses to test their employees and quarantine their staff for COVID-19 and refuses to do any contact tracing. We are demanding...the urgent attention of the Prime Minister and the Minister of Health in this matter,” he said.

They oughta be "worried over" paying their rent. It's amazing how the word "cases" now seems to be equal to "death". Fantastic job by the US and UK media.

Have you ever had Covid? It's no joke!