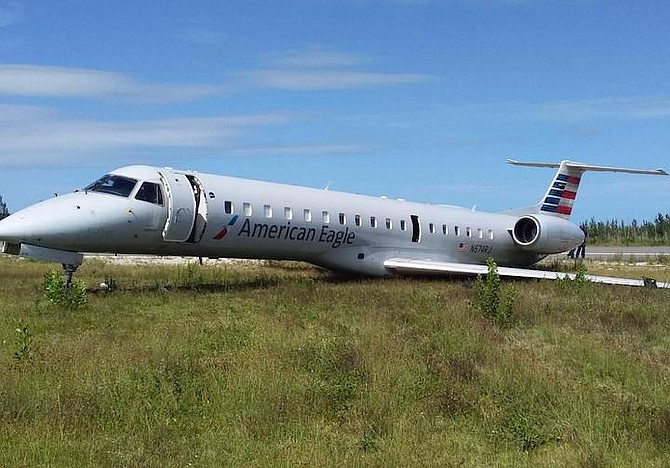 Photos from social media of the plane in Freeport. 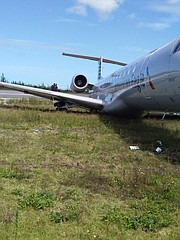 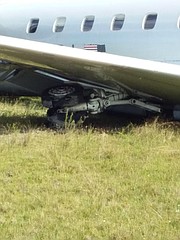 An American Eagle plane skidded off the runway at Grand Bahama International Airport on Saturday.

According to reports the aircraft, which had travelled from Miami, experienced some mechanical difficulties on the runway after landing shortly before noon.

As a result, the plane skidded off the runway and came to a stop 15ft from the south side of it, damaging the rear landing gear.

All passengers were accounted for with two being taken to the Rand Memorial Hospital via EMS personnel for non-life threatening injuries.

Annnnnd ... another pilot can look forward to an exciting career delivering pizzas.

That runway was literally sitting at the bottom of a lake for a long time in the aftermath of Hurricane Dorian. Potential sink holes, pot holes, etc. are much harder to protect against when it comes to a runway that was sitting on limestone covered with water for a lengthy period of time. Thankfully no loss of life.....this time!

No potholes or sink holes.

the landing strip is not anymore flat. Grund sinks and the asphalt bends after it was long time under water. You can see that e.g. at Kellys Freeport on the parking place.

Y’all are right ... it coulda been mechanical or potholes. So I’ll give the pilot the benefit of the doubt.

The real question remains: What caused the mechanical problems shortly after the jet touched down on the runway? I'm sure even the pilot is awaiting an answer to that question.

@tribanon, the now no vaccine Covid-19 affects "normal" pre Covid-19 way of life as it imposes host of stress critical concerns on functions. Ie the mechanics doing their job now have to be wary of other mechanic working alongside, health safety measures and other interaction situations inside job and outside job, traffic controllers, airport maintenance may be concerned by co worker improper wearing mask sanitized workplace etc. distracting fro, their efficiencies on job. Workers will now focus on personal safety first. World has changed adding more stresses on workers trying to have same level of efficiencies pre Covid-19. New situation with stresses of Covid-19 will affect jobs efficiencies done in chain of work.

You're so right @bogart. Only a fool would buy any complex machinery or equipment manufactured since January of this year, unless they absolutely must do so. The quality of manufacturing and maintenance processes all around the world have been seriously compromised in one way or another by the plague of the deadly Communist China Virus.

It's better to try repair what you already have rather than buy new, especially when it comes costly things like new autos, new trucks, new kitchen appliances, new airconditioners, etc. Whenever you must buy new, it's best to make sure it wasn't manufactured in Communist China or after January 2020.

And of course you take a much greater risk when flying today in planes/jets that have been grounded for a long time during the Covid-19 crisis and have not been properly maintained.

The runway in Freeport is below sea level. When you reach a certain distance from the runway you have to ignore screaming instruments and do visual.

not true. however it WAS below sea level in 2019 with Dorian.

Where do you people get these theories????

Well I doubt these planes have ever had a lay off as long as this...machines like to be run...if there are more there accidents may have plausible additional externalities of COVID restrictions! Lol...but seriously planes like to be in the air, ground them too long and...

Firstly, I seriously doubt the planes were mothballed awaiting Freeport Airport resuming flights. Second, the FAA will be on the ground investigating, if they aren't already. That will include inspecting the runway no doubt.

Huh - this article says Many Planes have been mothballed...the second discusses what it takes to keep a flight grounded...

FAA should require a plane's airworthiness be re-certified if it has been grounded for any significant period of time due to the impact of Covid-19 on the airline's business. But you can bet planes are being put back into the active fleet of airlines without this safety measure being properly done.

And American Airlines is the most financially distressed of the major US carriers with no money to spend on added safety measures to protect its passengers. I haven't flown via Bahamasair in years and AA is now one other airline that neither I nor my family members will be flying again anytime soon.

I think you mean the NTSB; not the FAA.

Pilot and co-pilot are remaining mumm on what caused the jet to suddenly veer on touch down. It will be months before the US NTSB releases a report. But, for obvious reasons, they will need to have immediately investigated and ruled out the runway itself as the cause of the mishap.