‘Majority Of Non-Hotel Staff Now Back At Work’ 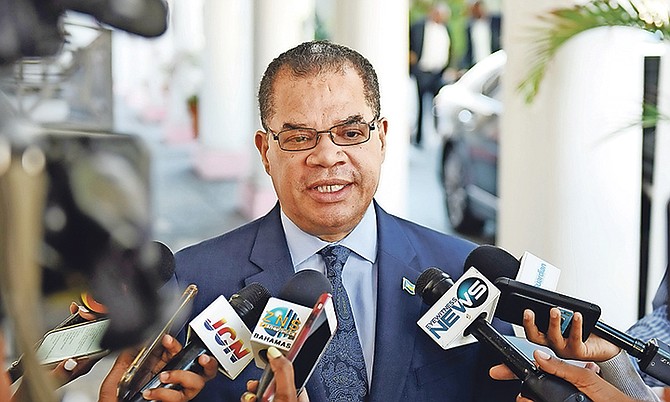 Minister of Labour Dion Foulkes yesterday claimed that the vast majority of Bahamians laid off due to the pandemic are now back at work.

His claim came as it was revealed the government’s decision to extend the temporary lay-off period beyond 13 weeks under the COVID-19 emergency orders was made to accommodate employers who did not have sufficient funds to provide severance packages to their employees.

Mr Foulkes made the revelation during his ministry’s press conference yesterday, but he acknowledged that the workers taken back on do not include those in the hotel industry. Hotel employees have been demanding severance pay from their employers in recent weeks, citing financial challenges and the need for more assistance to make ends meet.

Mr Foulkes said while the government empathises with those hit by the pandemic, officials must strike a balance to meet the needs of the wider Bahamian society.

“The government has put in a significant number of measures to assist all laid off workers during this period. The National Insurance Board has made available and the Ministry of Finance millions of dollars to aid and ease the burden being caused by these layoffs.

“We’re doing all that we can to ease the burden to also strike a balance in terms of the realistic, economic necessity of our society. “

During the onset of the pandemic, the government suspended the Employment Act provisions that mandate employers must pay full severance/redundancy to workers who have been furloughed, or sent home, after 90 days/13 weeks or otherwise recall them to work.

This provision is suspended until 30 days after the government’s COVID-19 emergency powers orders expires, which is currently being debated by Parliament for its extension until November.

Seeking to explain the government’s decision, Mr Foulkes said: “Emergency orders calls for the suspension of the provisions in the Employment Act which allows an employer to lay off, to temporarily lay off workers up to 12 weeks or three months. That provision has been suspended pending the end of the emergency orders and 30 days thereafter.

“That was done particularly to address a lot of businesses - small, medium and large businesses that did not have the financial capacity to pay severance pay to all of their employees.

“This is a once a century event that we are experiencing and no economy in the world has experienced an event like this so the government has to balance out all of the demands and all of the needs of the entire society so we are hopeful that the tourism sector will open.”

Noting that some resorts have already made known their intentions to begin their phased reopening in December, the minister said officials are also hopeful that other major hotels will also follow suit allowing for more employees to return to work.

Still, he said discussions are ongoing with some major resorts, particularly Club Med in San Salvador, concerning its decision to not resume operations until next year.

He said the government is hoping the operator, the largest employer on the island, will revise its projected reopening date.

Mr Foulkes said he was pleased with the progress being made, noting many Bahamian workers have returned to work since the country began its gradual re-opening.

“But I’m happy to report that since the initial lockdown and initial lay off which were thousands of Bahamians, many of them – the vast majority of them are now back to work,” he said.

“The major challenge now is getting all of the hotels operating and the cruise lines. As you know, the retail stores particularly on Bay Street which most of them are now closed are dependent on the cruise lines coming back to the Bahamas and with respect to the hotel workers.”

Asked about the country’s current unemployment rate, the labour minister said he could not give an exact figure, only telling reporters officials won’t know until the Department of Statistics completes its jobs survey – which has currently been suspended.

He said the country’s workforce comprises about 225,000 Bahamians.

“It is very difficult for us to face a figure on the unemployment rate in The Bahamas at this point and the Department of Statistics is charged with the responsibility to conduct their surveys which they do twice a year which now has been suspended so that the unemployment rate can be ascertained,” he said.

“The Central Bank has indicated that they are of the view that in March, April and May in the initial beginning of the pandemic, that because of all of the layoffs that the unemployment may have been between 30,000 to 40,000 but the bulk of those employees were temporarily laid off. Most of them have gone back to work with the exception of the sectors that I have already mentioned.”

In the meantime, Mr Foulkes urged Bahamians seeking employment to log on to the Ministry of Labour’s website or to visit the Department of Labour to find job opportunities.

Why is it with every minister they never know the figures to anything. Obviously these idiots don't do their homework before coming to the media for what obvious questions will be asked.

They never know the damn figures, this is just insane

This is a useless press release. To say that the majority of workers are back to work, but the hotel workers are not is a fallacy. Hotel workers are a huge portion of our workforce. And they are not working. What about straw vendors, Bay Street stores, tour operators, taxi drivers, watersports operators, places like Dolphin Encounters, Air BNB operators, restaurants, bars, gyms. Time to stop talking this foolishness. The facts belie what you try to push off on the people. What a disappointing collage of mis-information, this Headline portrays.

During the onset of the pandemic, the government suspended the Employment Act provisions that mandate employers must pay full severance/redundancy to workers who have been furloughed, or sent home, after 90 days/13 weeks or otherwise recall them to work.

This provision is suspended until 30 days after the government’s COVID-19 emergency powers orders expires, which is currently being debated by Parliament for its extension until November.

Private sector employees got royally screwed by the Minnis-led FNM administration whereas government has gone on a borrowing spree like no other to keep paying public sector workers their full pay and benefits. Simply unbelievable!

Reminds me of Capt. Quinn in Barry Lyndon:

My lady, except for you, AND FOUR OTHERS, I have never loved a woman like this before.