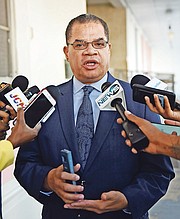 THE Road Traffic Department will reopen a satellite agency to make the licensing and inspection process smoother for motorists.

It is not clear when the site will reopen. However, yesterday Transport Minister Dion Foulkes said: “Recognising the importance of servicing motorists in these hard times, we will soon reopen a satellite agency in New Providence for licensing and inspecting new vehicles. The Road Traffic facility will be located at West Bay Street, adjacent to Clifford Park.”

His comments amid complaints over lengthy wait times at the department concerning the licensing and inspections process, with some observers calling for the government to modernise the process especially during these extraordinary times.

Yesterday, Road Traffic Acting Controller Bradley Sands acknowledged the challenges experienced to be a result of limited satellite stations. However, with the eventual reopening of a new satellite site, Mr Sands said officials are confident that the process will become much more efficient for motorists.

“Well, I do believe that Road Traffic will be more efficient in the shortest possible time. If you pay attention to what is happening now to the long lines at the traffic departments, that is simply because, one, we don’t have sufficient satellite stations,” he told reporters at a press conference yesterday.

“That is why we are reopening the office at Fort Charlotte. As soon as we are able to reopen the Carmichael Road Station, we will be able to alleviate the backlog that exists with the long lines. It is all based on the amount of outlets that the Road Traffic Department has.”

Meanwhile, Mr Foulkes added: “There have been many proposals that have been made to the government in respect to modernising and advancing the efficiency and speed of inspections. There’s something circulating on social media now about certain mechanical establishments getting the exclusive to do inspections.

“I could put that to rest now. That is not so, that is fake news but we are looking at, we are actively examining different ways of doing inspections so that we could make it easier for the motoring public to get their vehicles inspected.”

Asked yesterday when driver’s license examinations will resume, Mr Sands said officials are awaiting to receive the green light from the Ministry of Health.

“You must take into account that the exams are held in a very closed environment where roughly about five to ten persons can be in the rooms. We have been utilising our thermometers as well as our hand sanitisers and with the increase of the COVID cases, we have to take the necessary precautions to make sure that our staff and their families are not at risk.

“So, in light of that we have suspended the driving exams as well as the written exams until we are given the all clear of the ministry of health or the proper authority that we can resume those operations.”

When it was west bay st and Thompson blvd lines were still long, you added Carmichael lines are still long. Staff are just not efficient and could care less. I bet these lines will still be long regardless. Why can't one government service run efficiently just ONE.

It's high time the exam be taken online in front of a camera where they can fully see you and administer the test via zoom or whichever is available this isn't rocket science.

Wow, what a novel idea, totally worthy of the pomp and gravitas throughout the presser.... this public system is glutted with relics.... Spread your staff complement across more facilities, utilizing more of them and maintaining separation..... reduce the crowding at one facility.... Sounds like common flippin sense... Almost as common sense as renewing your license an ting online... wasn't that supposed to be implemented since April?.. jokas.

Meanwhile ............ there is NO Road Traffic Department office opened in Long Island

Does anyone really listen to anything this talking suit has to say about anything???