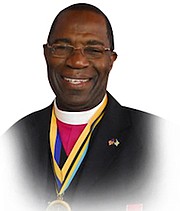 THE senior pastor of Golden Gates Assembly yesterday said although he had previously stated he could not force the church to do anything, he changed his mind because he did not trust the pastors protesting the appointment of his son as the organisation’s next senior pastor.

His comments came while he was cross-examined by defence attorney Ramona Farquharson-Seymour during a hearing before Justice Ian Winder.

The church is currently embroiled in a disagreement stemming from Bishop Rostin Davis’ recent appointment of his son, Trent Davis, as senior pastor of the church.

Mrs Farquharson-Seymour is representing several pastors, listed as defendants in a lawsuit headed by Bishop Davis, who are protesting his appointment as newly assigned leader.

During the hearing yesterday, Mrs Farquharson-Seymour referenced an interview Bishop Davis did with Wendell Jones in 2017, in which she claims he said Golden Gates “belonged to the people”. She noted when Bishop Davis appeared on Mr Jones’ show, he spoke about the succession plan for the church and said the organisation did not belong to him and his wife since God was the one who called people into ministry. Mrs Farquharson-Seymour said Bishop Davis also said he told Pastor Davis he did not know how much longer he would live, so he needed to come home and get to know the people so he would be available if they needed a pastor.

Still, she claimed at the time, Bishop Davis said he could not force them to do anything they did not want to do.

When she asked Bishop Davis if he accepted that his statements in the interview differed from his current position which suggested he was the only one who could appoint his successor, Bishop Davis told her he did accept what “she said he had said”. Still, he said when he made those statements, he gave “two conditions” which were if he died or if he became incapacitated.

“It’s true. I have changed my mind,” he said. “I do not trust the persons you represent because they have not been true at all.”

When Mrs Farquharson-Seymour asked Bishop Davis if it was true that only he, his wife and daughter voted in favour of Pastor Davis’ appointment when his son lost in a 10-3 vote among the pastoral board, he said he could not recall. He also denied hosting “sporadic meetings” after the pastoral board voted against Pastor Davis, and claimed their monthly meetings were not held as often due to “many things”.

They are claiming the pastoral board cannot make resolutions that could determine who is appointed as senior pastor, because they are not a part of the church’s executive committee. They argue only members of the committee – which only the plaintiffs are a part of – can appoint senior pastors.

During her cross-examination, Mrs Farqharson-Seymour counter argued that the church had no executive committee, but rather the pastoral board ran the church spiritually, financially and maintenance wise.

In response, Bishop Davis said the church was governed by an executive council; however, to avoid “dragging on” meetings, they would have all of the board members meet at the same time. He said there would be meetings to cover all issues, but each board member knew which area they were to work in.

Mrs Farqharson-Seymour said when the church’s recording secretary died, Mrs Turnquest replaced her because Mrs Williams was “not active in her post and was nowhere to be found”. Bishop Davis said he did not accept this fact and said Mrs Williams told him and Pastor Davis that she just wanted to be an assistant. As for Mrs Pickstock, Bishop Davis claimed she was appointed to the executive committee after the lockdown in March.

When he asked Mr Strachan to state how many pastors were at Golden Gates, he told him there were 15 pastors, but two had tendered their resignation since the incident had unfolded.

When Mr Munroe asked him if he had taken any steps from 2018 to find out where he fell concerning the committee and council, he claimed it was an “ongoing process”.

Mr Strachan also said he believed he participated in a return to the Registrar’s General Department in July, which stated who the elected officers and directors of the organisation were.

Defendants Cleo Cash, Inez Pinder and Dwight Armbrister are set to be cross-examined by Mr Munroe when the matter resumes on November 25.

See them fighting for power.