Alicia Wallace: Dorian Must Be More Than A Memory - Rather A Call To Action 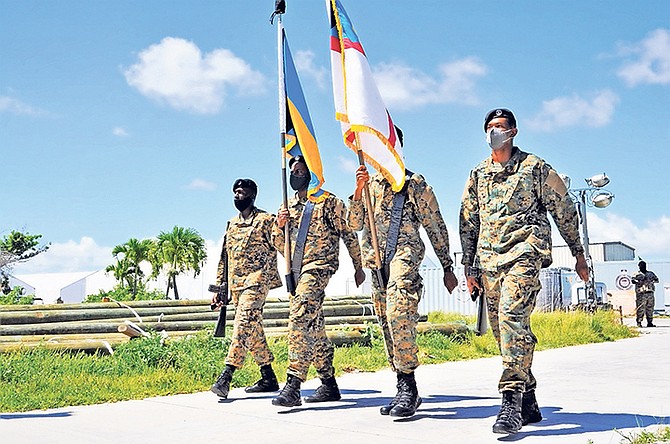 It has been one year since Hurricane Dorian devastated Grand Bahama and Abaco. The people on those islands suffered through what the rest of us cannot imagine. The destruction of buildings and loss of infrastructure do not compare with the challenges they had to push through to survive. We still do not know the number of lives lost to the storm. Not only were we unprepared for Hurricane Dorian, but our response was and continues to be inadequate. The storm and its aftermath cannot be forgotten.

We cannot allow each other to simply move on. It is not enough to grieve. It is not enough to regret. It is not enough to remember. On the weekend, I saw a social media post from someone whose house just got electricity for the first time since Hurricane Dorian. Last week, I got a message from a family in Nassau, still unable to return to Abaco. Just over a month ago, we were panicked about Hurricane Isaias, struck by the new reality of hurricane season. We will not look at hurricanes in the same way again. Still, what are we doing to protect ourselves and each other?

Climate change is real. Climate action is required. We are not having enough conversations about rising sea levels and our precarious geographic location. Climate resilience needs to be on the agenda of every government ministry and department, every political party, every non-governmental organization, every religious institution, every school and every household. We need to understand how climate change creates new risks for us and how we can anticipate and prepare for them when we cannot completely avoid them.

One year later, we should know more. How are Bahamian experts in science, technology, engineering, art, and mathematics (STEAM) being engaged by decision-makers? When will there be a national climate action campaign? What will be done about inadequate shelters? What are we going to do about food (in)security? What systems are being developed and tested for evacuation, housing and ongoing assistance after a storm?

Which countries, particularly in the Caribbean and the Pacific, will be our partners as we conduct assessments and chart the way forward? What is the budget allocation for climate action, environmental stewardship and disaster management? What has been done to prepare for, should it happen, another climate event like Hurricane Dorian?

We should not have to scramble to respond to another climate event. We, as citizens and residents, should not have to guess about what the government is doing to prepare and protect the country. There should be widely promotes opportunities for students interested in STEAM, especially with a focus on climate and environment. We should be hearing from experts and practitioners on a regular basis, and their knowledge and experience should be recognized as a valuable resource for learning, planning, and executing robust systems and programmes.

Hurricane Dorian was a beast. It forced us to remind ourselves, every day, that we are #BahamasStrong. We needed the mantra, as encouragement and motivation. A year later, we remember. A year later, we need more than memory. We need a way forward.

Chadwick Boseman at the American Music Awards in 2019. (Photo by Jordan Strauss/Invision/AP, File)

Boseman’s silence was his choice to make

In January 2018, we got Black Panther. The highly anticipated movie was Marvel’s biggest opening weekend and cleared $292m in its first week of screening in the US. It was more than a movie. It was a performance event, patrons dressing in their best African print ensembles, superhero costumes and imaginative pieces. There was face paint, there were props and theatres buzzed with the excitement of black people ready to see themselves on the big screen as heroes. In the movie, T’Challa returns to Wakanda after the death of his father to assume the position of king of the African nation, but he has to face an arch-enemy.

The role of T’Challa was played by Chadwick Boseman whose death was announced by his family at the weekend. The American actor, born and raised in South Carolina, previously played Jackie Robinson in 42, James Brown in Get On Up and Thurgood Marshall in Marshall. It was revealed, after his death, that the 43-year-old battled colon cancer for four years.

The news of Boseman’s death was shocking to everyone. Many took to social media to express their grief. While, to some, it seems odd that people feel deeply about celebrity deaths, it often opens a valve, releasing pressure that was held and ignored. People talked about what the impact Black Panther had on them, what it meant to see a Marvel movie filling the screen with black people and the important role Boseman played.

People on social media laughed through tears as they remembered how “we all showed out” from the time Black Panther was announced and continued well into its run in theatres. Wakanda brought joy to many people and Boseman played a major role in that.

Boseman’s illness was kept quiet. Members of the cast of crew of Black Panther and other colleagues were as surprised as the general public to learn he was undergoing treatment which included chemotherapy and multiple surgeries.

There have been arguments about the reasons he kept it private and the broader implications of the decision. Did he keep it a secret so that he could continue to work? Maybe people in the industry would deem him unfit for the roles he played or doubt his ability to show up every day. He may have been concerned about the illness eclipsing his identity. How would Wakanda have been promoted if everyone knew Boseman was battling colon cancer while filming? Would the narrative have shifted, focusing on his personal life and strength? Would people have treated him differently on set and in social settings?

Maybe Boseman wanted to live his life as normally as possible. There were probably roles he really wanted to play. His decision may have been selfish, selfless, or neither. He did what felt right for him. It is important, however, to note some people do not have a choice. Some people cannot work through illness. Someone people have to work through illness. Some people have the privilege of privacy while other do not. No two experiences are the same.

Some people have already started turning Boseman’s life, work and death into inspiration porn, pointing to all that he did in the past four years while undergoing treatment, saying the rest of us have no excuse for not working hard. It is a dangerous and flawed argument. We should not have to prove our value or dedication by pretending to be fine when we are not. Two people in same general circumstance can have starkly different experiences. We have to be able to choose the path that is right for us and it would be helpful to be free of judgement and unfair comparisons.

In the words of T’Challa, “Now, more than ever, the illusions of division threaten our very existence. We all know the truth: more connects us than separates us. But in times of crisis the wise build bridges, while the foolish build barriers. We must find a way to look after one another, as if we were one single tribe.”