As Nation Remembers Dorian Dead, Pm Concedes: We Have Much More Left To Do 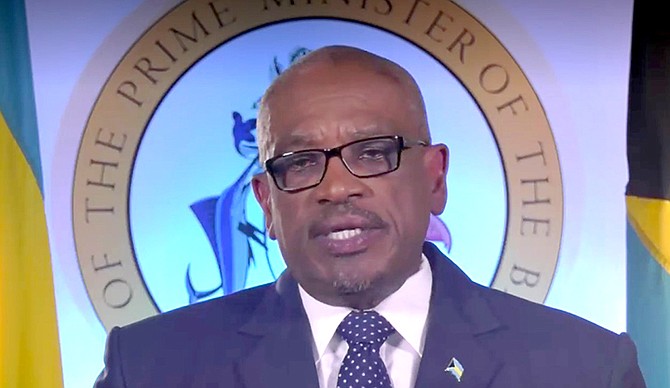 ONE year after Hurricane Dorian bulldozed its way through Abaco and Grand Bahama, Prime Minister Dr Hubert Minnis acknowledged the frustration survivors have felt in trying to repair their lives and apologised that many things have taken too long to complete.

Last week, Dr Minnis said he was pleased with the clean up work that has taken place on the devastated islands, but yesterday his telling admission was one that echoed what many have said for the past few months.

Residents in Abaco have expressed displeasure that utilities have still not been fully restored, while others in Grand Bahama have similar grievances.

“It will take many years before Abaco and Grand Bahama are fully restored,” Dr Minnis said in a televised address yesterday to mark the first anniversary of the deadly storm. “I fully acknowledge the frustration at how long many things have taken.

“We pledge to communicate to you in a timelier and more effective manner. On behalf of the government, I acknowledge what has not been done and the long and difficult road ahead.”

“We have made some progress, but not enough. There is still so much, much more to do,” Dr Minnis also said earlier in his address.

Calling yesterday a day of remembrance, the Prime Minister said people were still grieving over the loss of loved ones.

“We remember all of those who lost their lives because of the destruction and ravages of Hurricane Dorian. We continue to pray for their souls even as we honour their memory.

“We remember and continue to pray for those who lost loved ones and who are still grieving. Grief is one of the hardest human experiences. We miss our loved ones with a depth of sorrow so overwhelming that it is hard to bear,” Dr Minnis said.

“We remember the survivors of Hurricane Dorian, who are still rebuilding their lives and their communities on Abaco, throughout the Abaco cays, and on Grand Bahama. We remember and we will never forget the pain, the suffering and the devastation from this monster storm, from which it will take time to recover on many levels.

“Bahamians and residents suffered life-changing injuries and mental trauma from what they endured. On behalf of myself and my wife, Patricia, and the government and people of our country, I again offer condolences and prayers to all who lost a loved one during Hurricane Dorian. All of their lives were important.”

He continued: “Each one of our brothers and sisters who died was a special person in their families and communities. I ask all Bahamians to keep praying for their families. Pray that God’s mercy will comfort them in time. Hurricane Dorian was the strongest storm to ever strike our Bahamas.”

There still remains uncertainty over exactly how many people are missing following Hurricane Dorian.

In May, the Disaster Reconstruction Authority held a mass burial of 55 Dorian victims.

And then in June, Assistant Commissioner of Police Solomon Cash said missing persons reports were only officially filed for 33 people, as he called on people who may still have missing loved ones to come forward to police, no matter their immigration status.

That same month, former Health Minister Dr Duane Sands said the government has not explained how hundreds of names were culled from lists of people missing following the Category Five storm. He also said responsibility for missing and dead persons was spread across multiple government agencies to ensure clarity but that this instead “proved a recipe for disaster.”

The official death toll stands at 74.

While many grapple with immense sorrow over loved ones, others have struggled with survival and having to rebuild their lives, which were ripped apart by the monster storm.

Dorian first struck Abaco on September 1 with maximum sustained winds of 185 miles per hour, gusts of 220 miles per hour and storm surge in excess of 20 feet. The storm then moved to Grand Bahama, where it hovered for nearly two days.

It caused $3.4bn in losses and damage.

The areas in Abaco and Grand Bahama struck directly by the storm looked like war zones afterward.

Dorian tore homes from their foundations and destroyed businesses. Boats and shipping containers were flung across neighbourhoods and business districts like pieces of paper in the wind.

These will take time to rebuild, Dr Minnis said.

“It will take time to rebuild this vital infrastructure, including the rebuilding of the utility infrastructure in Central Abaco. Our work to restore Abaco and Grand Bahama has been constant in partnership with the residents of the various communities and our international partners. We have made some progress, but not enough.

“There is still so much, much more to do. When we saw the destruction Dorian caused, we immediately knew that no small island developing nation such as the Bahamas could respond on its own. We made the decision to welcome in the largest contingency of international partners in Bahamian history in response to this extraordinary natural disaster.

He thanked Bahamians and Bahamian groups along with the international agencies, NGOs and volunteers who helped in the immediate aftermath of the disaster, and who are still working at restoration.

Dr Minnis said the government through the DRA continues to do the heavy lifting.

“The government continues to do the hard work to restore and to rebuild the communities still hurting badly on this painful day of remembrance.

“The Disaster Reconstruction Authority and the Office of the Prime Minister in Grand Bahama are through various media communicating some of the progress and the work that has been accomplished in the last year. The hard and painstaking work continues to restore the devastated communities.”

The resilience of Bahamians is what will allow the country to pull through, Dr Minnis said.

“We must rebuild for a new time in our history as we address with resilience and fortitude the many effects of climate change, including more powerful storms and rising sea levels. I have no doubt that we will build back better.

“But, it will take time. Each time we faced a crisis in the past as Bahamians we put our heads down and got to work together – black and white, rich and poor, young and older. We are doing this again, even as we are also facing the many challenges of the COVID-19 pandemic.

“We are strong when unified. There is no challenge we cannot overcome. Many hardworking Bahamians transformed these bare limestone rock islands generation after generation into one of the more dynamic and successful small island states in the world and in the region.

“With God’s blessing and the continued work of citizens, the government, businesses, churches, civic groups, and international partners, Abaco and Grand Bahama will emerge in time from this even more prosperous and dynamic than they were before,” the Prime Minister said.

The “DRA” is a misnomer and should simply be referenced in history as the “Disaster Authority”, as there is certainly no “reconstruction” component ... and never will be when the Salaries of the “incompetent” Authority exceed any meaningful relief actually provided making it an insulting waste of Tax Payer money in the name of people in such obvious desperation.

Question, how much money do you believe the govt should give you to rebuild what you have lost?

Its sad how yall measure your worth in votes. It will take generations to break the mind f**k of colonialism, clearly. Nassau has always taken the lions share of resources,more people more votes - not saying its right. When gb was mash up hurricane after hurricane nassau and abaco didnt care. Lets not forget ragged island. I'd like to see the party that will divert all the countries money to satisfying persons belief that their houses and business should be rebuilt in a year and with marble countertops.

Fully feel your pain. The Bahamas made up of many populated islands and with lesser amount of political Member of Parliament representatives and Legislators together on several islands, versus the majority of one single island New Providence, having more Members of Parliament at a mathematical advantage duties, combined with Westminister system, keeping majority to toe the line in line to vote, and head of party being PM and leader living of same island with political governing majority of MP's. Its the existing legal political system which has been in place for numbers of alternating political parties holding power many times before till now.

This speech is an insult to the victims of Dorian. This government is great with speeches and does nothing. He says he is going to communicate better. Well, I guess since there is hardly any communication yet, it wouldn't be hard to improve it. We locals in Abaco couldn't exist with the NGOs providing food and water. No police presence yet they have plenty of police to stop people walking in Nassau. The reconstruction authority and NEMA are a joke. We can only pray for a miracle to happen.

It certainly is true that people not familiar with the actual situation at Abaco have little idea of what has changed up here. Compared to the level of economic activity up here before the storm, this island is more like what you could call a ghost town. A greatly reduced population combined with difficulty in carrying out basic banking transactions along with a scarcity of hardware materials and a crippling unavailability of electrical power in several areas takes some getting used to as well as considerable resourcefulness on the part of residents. Thank goodness for the freight boats.

Sadly, It is much worse by far than was the Fake OBAN signatory cause it tugs at the hearts of an entire colony!
Mr. Theodore Minnis, Kevin Peter Turnquest, Dionoiso James, LOI Renward, Marvin Dames, Carl Wison Bethel, and Jeff Loyd's red coats 'bulls—t’, must be called out to the faces by the media for what they are as uncaring red coat republicans.
If you're sincerely paying respect to Hurricane Dorian's dead then identify the 65 buried in the newly created graveyard by Abaco's South and North MP's James Jimmy Sweeting and The Honourable Darren Allan Henfield for what they really are the Central Regime's architects of The Graveyard Hurricane Dorian's UnIdentifable Dead - dead bodies not buried out compassion but to free up freezer slabs make room for DOVID's incoming dead bodies. Just much too serious a matter make this stuff up. Just shouldn't, A nod of Once for out Respect,** Twice for No?

It's been over a year since Dorian and Minnis has YET to do ANYTHING for the people of Abaco!