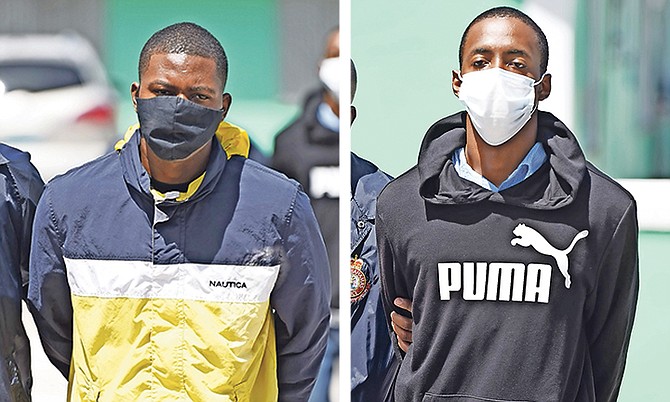 TWO correctional officers who handed in fake sick slips to get time off from work were sentenced to more than a month in prison on Thursday after they admitted to defrauding the Department of Correctional Services and the government.

When the defendant first appeared before Chief Magistrate Joyann Ferguson-Pratt on Wednesday, he pleaded guilty to the charges brought against him.

The court heard commissioner of the prison suspected the sick certificates Pinder submitted were fraudulent. When he made preliminary checks with the PHA, he was told Pinder did not register at the hospital on the dates listed on the sick slips. The medical chief of staff also confirmed the signatures on the slips were not made by any doctors employed by the hospital.

When Pinder was questioned by police he denied the allegations and insisted he did visit PMH. Still, he admitted he never saw a doctor and instead, got two sick slips from a nurse he knew as “Knowles” for $15 and $25.

On Thursday, Pinder was sentenced to 60 days in prison. He was also fined $1,000 for uttering two forged sick certificates and ordered to compensate the public treasury $1,561.14 for the money he defrauded. Magistrate Ferguson-Pratt warned if he failed to pay the funds, he would be sentenced to an additional three months at BDCS.

The prosecution also alleged Lightbourne obtained $360.84 from the government in 2019.

The court heard the commissioner of the prison also suspected the sick slips he received from Lightbourne were fraudulent. When he made checks at PMH, it was confirmed that Lightbourne did not register for any service on the dates listed on the sick slips.

The court was told the signatures on the documents were not from any doctors working at the medical facility either. After Lightbourne was arrested, he told officers he did visit PMH and attempted to seek medical attention for a stomach virus.

He claimed while there, he became irritated with the poor service and spoke to a nurse who noticed his frustration. The defendant claimed the nurse then took his information and returned with a sick certificate in his name. Lightbourne added when he returned to the hospital a second time, the nurse recognised him from the prior incident and gave him another sick certificate.

During his arraignment, Lightbourne was sentenced to 40 days behind bars. He was also fined $1,000 for uttering two forged documents and ordered to compensate the public treasury $360.84. If he fails to pay the fines, he could risk spending an additional three months in custody.

After sentencing the men, Magistrate Ferguson-Pratt told them their actions were unacceptable because they were called to a higher standard as uniformed officers. Still, she told the defendants to look at their current situation as a defining moment in their lives and urged them to allow the experience to serve as a life lesson for them.