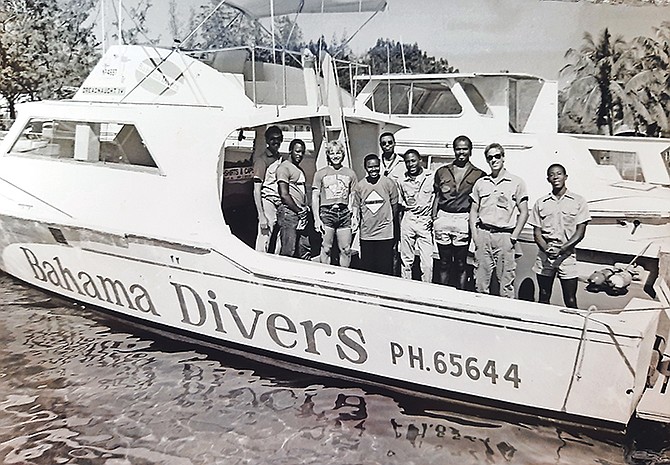 A 55 year-old Bahamian diving "institution" has been forced to permanently close its doors with the loss of 15 full-time jobs after a $9m judgment was enforced against it over a customer's drowning.

Matthew Whiteland, owner of Bahama Divers, which was founded by his father in 1965, told Tribune Business that court bailiffs arrived to seize the company's assets within 48 hours of its re-opening following the first COVID-19 lockdown.

Branding the company's fate "a big mess", he argued that it would be impossible to even come remotely close to recovering the full $9m award from Bahama Divers' liquidation as the company's annual gross sales "barely turned" $2m per year.

Suggesting that liquidation/receivership costs might exceed the company's net worth, Mr Whiteland said he was leaving the deceased US diver's family and their Bahamian attorneys, Higgs & Johnson, to "figure out" who gets what with the court plus Bahama Divers' bank and landlord - both of whom are claiming that monies are owed to them.

Describing the East Bay Street-based dive and snorkel operator's closure as "a sad day", he added that he "feels horrible" for his father who put a lifetime into the business as well as its now-redundant staff, many of whom had worked for Bahama Divers for 20 years or more.

Mr Whiteland said he hopes to re-enter the dive business via a new venture, and pledged that ex-Bahama Divers staff would have "first spot", but suggested this may take some time due to the likely difficulty in attracting investment/financing for a tourism-related business amid the industry's ongoing COVID-19 shutdown.

Disclosing that efforts to enforce the judgment against the company first began in the Supreme Court in 2008, he added that he was repeatedly told over the course of a 12-year legal battle that an award to the extent of $9m "can't happen".

That, though, was before the shock delivered in early July. "Everyone was excited to re-open on July 1. And on July 2 the bailiff official shows up and told us they were seizing everything as a result of a Supreme Court order," Mr Whitehead told this newspaper.

Explaining how Bahama Divers found itself in that position, he said: "I don't know if it was 2001 or 2003, but in the early 2000s a US guest went out with us, a certified diver, diving with some buddies. It was a shallow dive, 25 feet or less. He signalled he was going back to the boat, never made it and was later found dead.

"It was unfortunate and very sad, and I guess his wife.... I know they tried to sue a bunch of people in the US. That didn't go anywhere, and they found a loophole to sue us in the Florida courts. They got a judgment for $9m, came to the Supreme Court, and the Supreme Court enforced it. That's what it was over.

"Everyone kept telling me that cannot happen. When they liquidate everything, it's nowhere near $9m. We couldn't pay the rent, and we have no inventory, no boats". Mr Whiteland said Bahama Divers obtained a significant "chunk" of its inventory "on credit" from US-based suppliers, raising questions as to whether these assets can be sold in a liquidation or if the vendors must be paid what is owed.

"The bank is mixed up in this. They have a debenture on the overdraft," he added. "The landlord of the rental unit we were in is saying he's keeping it all [the company's property] because of unpaid rent. We were closed since March because of COVID-19, and not able to pay rent at Nassau Yacht Haven.

"It's a big mess, and I don't know how they're going to figure out all of it, who's going to get paid and who isn't. They might have seized everything, but it's far from over for whoever has to liquidate everything and recover the money."

Despite reassurances from Department of Labour officials, Mr Whiteland voiced misgivings over whether Bahama Divers' staff would receive the full severance pay due to them. He affirmed that the company was closed "for good" and had ceased trading under that name, adding: "Even if I make it work as Bahama Divers every dollar of profit will go to them."

Tourism industry sources yesterday voiced dismay at Bahama Divers' closure, as it further depletes an increasingly shallow pool of operators in a dive/snorkelling market that will be a key attraction in enticing tourists to return to this nation once the border restrictions and other COVID-19 limitations are lifted.

"It was one of the giants in the dive industry, which is so fragile, especially with COVID-19. While they didn't have many staff, they had two to three boats. It's a crying shame. Their paperwork must not have been up to snuff in terms of liability release forms."

Mr Whiteland, meanwhile, questioned the logic of seizing Bahama Divers assets and shutting it down. He argued that the timing, especially, coming after the business had been starved of revenues for three-and-a-half months due to the COVID-19 lockdown made no sense if the objective was to maximise recoveries.

"We've never made that kind of money," he said of the $9m award. "I never knew where we'd get $9m from. The moment they said $9m we were done, as there's no way we could ever pay that off. The whole company closed in on itself. There was no working capital, no inventory and no boats. What am I supposed to do? There's no way out of it."

Mr Whiteland added that Bahama Divers was allowed to operate until August 1, and used the month to generate funds to pay off its bank overdraft. "We stayed open until Higgs & Johnson were ready to do something. They told us to keep operating as normal," he said.

"We've been telling them this for years, giving them the company's financials and saying: 'We don't know what you guys are after'. By sending in the bailiffs I don't know if they were hoping I would panic. Why pressure us on July 2? What possible money could we have? We have gone three months without any revenue and you think July 2 is a good time to squeeze me for money?

"Nine million dollars is kind of absurd from a company that barely turned $2m a year in gross sales. When you take out expenses we were barely getting by, like most companies."

Declining to name either his landlord or bank, Mr Whiteland said Bahama Divers finally ceased operating after the former provided him with an eviction notice on August 1. He added that the closure of a business which was formally incorporated in 19767, having been started in his father's garage in 1965, was "a sad day for everybody" - especially the couples among the staff who relied on the business for their entire income.

"It's a blow to everybody," Mr Whiteland told Tribune Business. "My dad, who is 84, he's pretty much bankrupted himself to pay the legal fees to continue the court work. The lawyers kept saying don't worry, it's too much money to wind you up.....

"We've been around for a long time. I feel horrible for my dad as he put 55 years of his life into it, and his partner, Leroy Lowe, who is retired in Abaco. Lots of the staff put their life into it to. That's why I'd like to get back into it if I can figure out how to fund it.

"That will be a while, and until we know what's going on with tourism who's going to be interested in funding a tour operator?"

Mr Whiteland voiced optimism that Bahama Divers would have been able to survive COVID-19 and continue in business had it not been for enforcement of the $9m award, although this might have required it to find an alternative to Nassau Yacht Haven where the rents are "pretty steep".

Where was the insurance coverage?

... good question. A shame Neil Hartnell neither asked nor answered it.

Insurance didn't want to pay from what I understand. Any loophole they try to find

Sad that Bahamian courts are now rubber stamping ridiculous US court awards. The only winners here are the lawyers, yet again.

Very sad. How the hell does that even happen. No way should the Bahamian court force an order fro a case tried in the US.

International treaties, signed by the Commonwealth, etc. ... more common than you’d guess. If a nation wants to do international business, legal reciprocity is necessary.

According to the US Dept of State:

"There is no bilateral treaty or multilateral convention in force between the United States and any other country on reciprocal recognition and enforcement of judgments. Although there are many reasons for the absence of such agreements, a principal stumbling block appears to be the perception of many foreign states that U.S. money judgments are excessive according to their notions of liability. Moreover, foreign countries have objected to the extraterritorial jurisdiction asserted by courts in the United States. In consequence, absent a treaty, whether the courts of a foreign country would enforce a judgment issued by a court in the United States depends upon the internal laws of the foreign country and international comity. In many foreign countries, as in most jurisdictions in the United States, the recognition and enforcement of foreign judgments is governed by local domestic law and the principles of comity, reciprocity and res judicata." travel.state.gov/content/travel/en/le...

According to the American Bar Association

Next you should research whether there is an international treaty or convention that allows a judgment from another country (any other country!) to be enforced within the United States. Regrettably, the United States is not party to any bilateral or multilateral convention regarding the enforcement of judgment from another country. (In 1976 the United States and the United Kingdom initialed a “Convention on the Reciprocal Recognition and Enforcement of Judgments in Civil Matters,” 16 I.L.M. 71 (1977), but negotiations over the final text broke off in 1981.) The topic is not covered in any friendship, commerce, and navigation treaty. The topic is not covered in any bilateral investment treaty. americanbar.org/groups/gpsolo/publica...

That’s one hell of a precedent setting case. Wait until something tragic happens with the shark diving companies in the Bahamas. You all goin’ down the same road. People can’t fish or spearfish anymore because sharks have become conditioned to boat motors. Soon as they hear the motor, they gather around.

What supreme court backed this?

Why not just ignore a US court case as Bahamar did?

A company I worked at in the 80s was sued by an American and we just ignores it and kept going.

How can an American court possibly affect a Bahamian company?

so can i sue Microsoft in the Bahamian courts? i've got all sorts of greviances.

Well if a Bahamian court award you $100 million judgement, do you think US courts would enforce it?

Ok, so I read the Bahamas Supreme Court judgement. 1. Bahama Divers had a US Agent and a US phone number - i.e. was US connected so they had right to try the case. 2. Bahama Divers chose to ignore the case in the US completely ignoring their US connection.

Nothing is said in the Judgement but, reading between the lines, it would appear that Bahama Divers did not put the case in the hands of the insurance company.