Insight: Every Parent Is Facing The Same Agonising Question - Is School Safe? 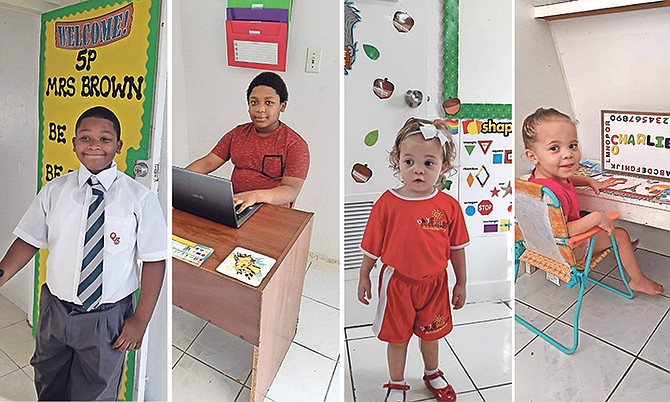 ONE year on for Dylan Bethel and Charlotte Hunt as arrival at their new classrooms becomes setting up a space at home for distance learning.

It was a very different start to the school year this time.

For our family, the school year started on Friday. No new uniform, fresh ironed and posing for pictures before the drive to school this time. Instead, it was an online video session for our eldest child, getting to know his new teacher at a distance.

The weeks leading up to the return to school – which is still some distance off for many after Minister of Education Jeff Lloyd delayed the restart of public schools until October 5 – have been filled with tough decisions.

The simple question has been whether or not school is safe for our children during the pandemic.

Parents want their children to go back to school for many reasons. The first, of course, is to make sure they get the best education they can. But there’s more than that. School is where they make their friendships, where they learn how to be social outside of their family. And on another level, having children at school lets parents go to work.

All of that comes under question when you ask yourself whether it is safe to send your child to school.

On social media and in chat groups, parents have been asking whether they should be sending their children back. You worry they will get ill, you worry they might inadvertently bring the virus home – especially to older relatives or those who might have pre-conditions that would put them at greater risk.

The widespread decision to start with virtual learning eases that decision somewhat – but brings others. Parents have already had one look at what virtual learning looks like with the end of the last school year – and many found it not as full-on as they would like. An occasional online class here and a couple of pieces of work there didn’t feel as thorough an education as parents hoped.

With that experience already, some parents have been asking whether that will be what is repeated this year – and whether that represents the right value for the money they are paying if their children are at private schools.

It’s a fair question – that money is meant to pay for everything the school normally provides, including swimming pools and basketball courts, all of which will sit idle for weeks, perhaps months.

Parents will have their own costs too. Back to school shopping has a very different flavour this year too. In Kelly’s at the weekend, the rows of school bags went untouched, while people instead were shopping for what they needed to set up a working space at home for their children. Small desks and laptops are on the wish list this year, not new bags and shoes.

So for some parents, it’s a question of weighing up whether what the school has to offer is worth the price this year – if those parents have an alternative option.

QUEEN’S College on Friday - with students taking introductory classes online rather than in the building, marking a very different start to the school year.

In fairness to the schools, they have their own worries. Just because they can’t offer in-school education right now doesn’t mean they can cut back on their own costs. They still need to pay staff, they still need to pay electric bills, water bills. If they don’t own the land the school is on outright, then they have a mortgage or rent to pay. Those bills don’t go away.

The end of the school year last time was also forced upon schools in a hurry – they had to adapt quickly to try to continue children’s education. This time round, they have had the opportunity to plan a little farther ahead – and hopefully that will pay off. Already, the length of the online sessions seems to be longer than last year.

There will likely have been a drop in the rolls at some private schools too simply because parents have lost their jobs and can’t pay their fees. That may well lead to a surge in numbers at public schools – making that teacher-student ratio even harder to manage.

There are so many questions and so many people trying their best to make things work – both parents and teachers, with the students in the middle having to deal with whatever comes their way.

It’s going to be a hard year. Even if a vaccine comes along early next year, it’s going to take time to distribute it – and judging by how far down the list The Bahamas seems to be in receiving testing material for COVID-19, we’re probably not going to be much further up the list when it comes to getting the vaccine. We need to consider whether students might need a full re-run of a school year – is it better to have a stalled generation than one rushed through regardless?

All of these questions have been swirling the whole summer long – and here we are. As I write this, we have just finished setting up separate work areas for our two children, along with our own in between so we can work from home too.

We’re lucky, we know that, but we can’t help but think about those less fortunate, and how all of us are going to cope.

Children are not really the problem, adult teachers with high risk medical conditions are!

Obviously, it is likely not very safe.