Insight: We Won’T Survive Keeping Our Fingers Crossed And Just Hoping For The Best 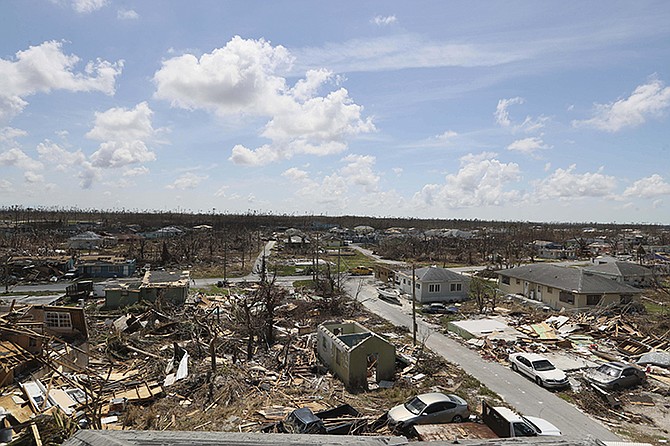 Destruction caused by Hurricane Dorian in Marsh Harbour, Abaco, a year ago. Few could have predicted the disastrous year The Bahamas has faced - but are we planning for the worst the future might bringing? Photo: Fernando Llano/AP

IF someone told you last year that the next 365 days would be filled with some of the most devastating circumstances to ever befall our nation, it is doubtful one would have been able to conjure up the calamities we’ve witnessed. Even for the most astute, envisaging a global pandemic on the heels of a natural disaster of cataclysmic proportions may have been a stretch. Yet, that is where we are one year after Hurricane Dorian.

The lost lives, the lost jobs and homes - many Bahamians could not understand this level of hardship, only to have their already difficult situations exacerbated by COVID-19. It is beyond tragic.

Still, a resilience exists within our people. As difficult as life has become for many of us, the Bahamian people are holding on. And that’s as about as much as one could ask of people who’ve lost almost everything.

The government, for its part, has touted its response to Hurricane Dorian in recognition of the one-year anniversary of the most powerful storm on record to ever hit The Bahamas.

Proud to outline the $3m disbursed to aid 113 small businesses, the nearly $1.8m in rent payments, over $330,000 in vouchers to purchase appliances and beds, and over $3m through the Small Home Repair Programme - the government can surely be commended in some respects. At the same time, perhaps the most important number we should be thinking about is 4,000.

Since 2003, more than 4,000 natural disasters have significantly impacted the Caribbean region. Just in the past five years alone, we’ve experienced four superstorms that have cost countries roughly $98bn and taken the lives of at least 855 people on record. And while we are still in the middle of hurricane season, the comfort once taken during this time, is all but gone after parts of Abaco and Grand Bahama were nearly made unrecognisable in Dorian’s treacherous wake.

The pain-filled reflections from survivors are just as heart-wrenching as they were when we first heard them a year ago. In fact, they are much worse now considering the burden COVID-19 has placed on many of those individuals who lost their jobs and have been further set back by the economic downside of the virus.

While steps have been made to help storm survivors rebuild their lives, by the Prime Minister’s own admission, not enough has been done in advancing those efforts.

Likewise, Ragged Islanders have had similar gripes about being forgotten after so many promises were made to help them rebuild their lives. remember that green paradise Dr Minnis promised to create for them?

Whereas many may offer arguments that the government is doing its best under the circumstances, these are the things that should produce great leadership. And as such, the Prime Minister and company will need to dig deeper as we navigate through this time. Moreover, in that same spirit, our level of strategic planning leaves much to be desired as it does not seem that we have prioritised disaster mitigation as much as we have been focusing on responsiveness. Certainly, the latter is important. But with climate experts having projected that 80 percent of the country will be lost due to climate change within this century, urgency must be the order of the day.

A sobering reminder of this reality was published in a local daily last week in a story covering the Pacific Disaster Centre’s outlook on the prospect of a Category 5 hurricane hitting New Providence. Literally, some of their findings would keep you up at night. The Tribune has reported similar reports over the last three years including graphics showing clearly which areas would be drowned out by rising sea levels.

In this lastest report Scott Kuykendall, a disaster management specialist at the Pacific Disaster Centre, said that 70 percent of the island would be flooded and susceptible to a storm surge that could affect up to 116,700 people, costing about $15.7bn in infrastructural damage. Certainly, that should cause all the hairs to stand up on the back of your neck.

Too often, we’re waltzing into hurricane season with a hope and a prayer – particularly when climate researchers have already clearly stated that it’s no longer a matter of if, but rather when, The Bahamas will encounter such a superstorm.

The longer we take to make strategic steps to deal with the reality we face, the more we place our entire country at risk. Unfortunately, if a storm hits New Providence, it may as well have blanketed the entire country as a result of the level of dependence the other islands in our archipelago have on the capital.

With people, government, banking and tourism centralised on one island, we don’t have the luxury of not being prepared. Too much is at stake.

New Providence’s 21 by seven miles stretch of land could not withstand the threat of a storm surge that can go deep inland.

How many more administrations will have the power to, but fail to make this a priority?

If we have learned anything from this past year, it’s that we are not immune to tragedy. And in some ways, perhaps that may be for the best. Because unless those who aspire to lead us to pull the plug on buzzword governance and really do the work required, tragedy will become all too familiar to the Bahamian people.

Malcolm The PM is no shepherd. he is weighing in the balance and found wanting.