‘Jazz’ Gets His First Hit 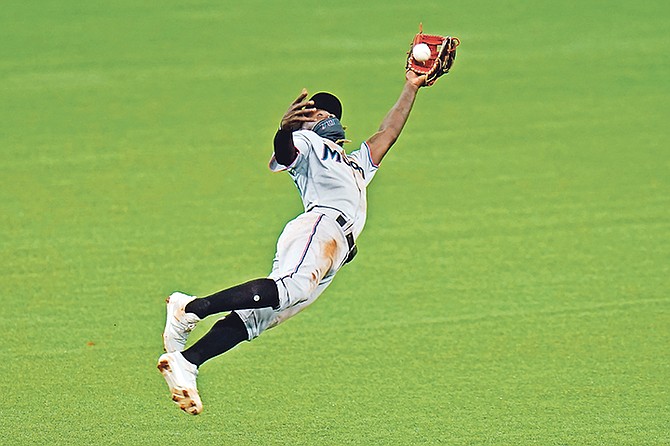 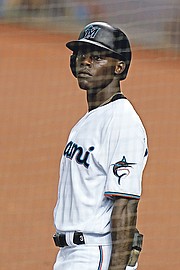 Jazz Chisholm looks on before batting during the second inning against the Toronto Blue Jays on September 2 in Miami. (AP Photo/Wilfredo Lee)

Jasrado “Jazz” Chisholm notched a career milestone with the first hit of his MLB career for the Miami Marlins against the American League East leading Tampa Bay Rays.

Chisholm singled to right centre off the Rays’ Peter Fairbanks in the top of the seventh inning of the Marlins’ 5-4 extra innings loss yesterday at Tropicana Field in Tampa Bay, Florida.

In a four pitch at bat, Chisholm got caught looking for strike calls on the first two pitches, a cutter and a sinker.

He was picked off caught stealing second during the following at bat.

Chisholm also flashed his potential in the field with a highlight-reel worthy diving catch over his right shoulder in right centrefield for the first out of the eighth inning.

He finished 1-4 on the afternoon at the plate and in the field, he had three assists and two putouts defensively.

Yesterday’s game was Chisholm’s second start at shortstop and he appeared as a pinch runner Friday night as they fell to 17-18 on the season following the series.

The Marlins remain on the road for a matchup with the Atlanta Braves today at 1:10pm.

The series began with the Rays’ 5-4 win Friday night.

He advanced to second on a fielding error and was out on the ensuing at bat on a fielder’s choice.

The Marlins won game two of the series 7-3 on Saturday night. Chisholm made his historic debut and became the seventh Bahamian to advance to the MLB on September 1. It was the first game of a back-to-back against the Toronto Blue Jays at Marlins Stadium. The Marlins won 3-2.

The 22-year-old made his major league debut as a defensive substitute in the top of the eighth inning for shortstop Rojas, who left the game because of a sore abdomen.

One night after his debut, Chisholm got the first big league start of his young career, filling in at shortstop for the injured Rojas. Chisholm went 0-4 at the plate and defensively had two assists and one putout in the Marlins’ 2-1 loss in their second game against the Blue Jays in as many nights.

Following his callup, Chisholm said he remains cognisant of his role as an inspiration to future generations of aspiring Bahamian baseball players.