Face To Face: Watch Out - Isha Has A Goal And There’S Nothing Going To Stop Her Achieving It 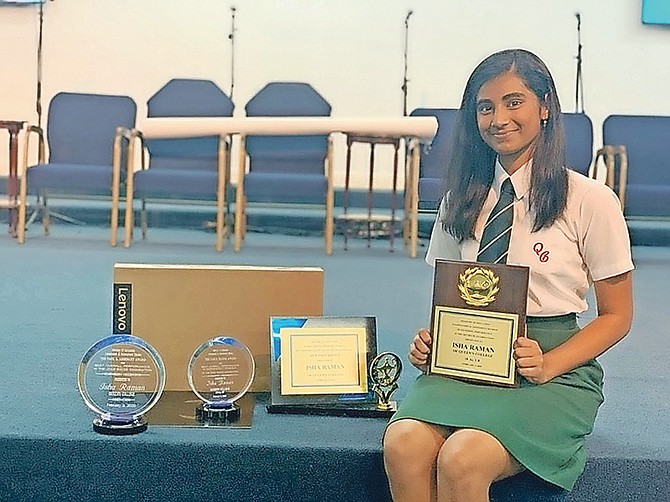 A wonderful conversation with the nation’s top achiever in the BGCSE (Bahamas General Certificate of Secondary Education) revealed that not every high-flying student had the road paved for them. In fact, Isha Raman’s story proves we have to inspire this country’s youth to want to do well – not for their teachers and parents, but for themselves. If they learn of stories like Isha’s, they will see they can indeed achieve what seems like a near-impossible task.

Isha knows what it’s like not to do well in school. She was not reaching her full potential. The subjects she liked, she did well in. But, she suffered in the subjects she didn’t like. On top of that, homework was not her strong suit. She applied herself well in school, and she did well on her tests. As for homework – Isha felt it was unnecessary.

“Homework just didn’t sit right in my mind,” she explained.

Isha and her parents, and little sister Ria.

“I just felt like you shouldn’t have to bring work home. Work is for work and home is for home.”

However, Isha’s grades suffered because of it. Her father was there to remind her to stay focused on her life goal and allow that to drive her to do better. It wasn’t easy, though. Most high schoolers don’t want to apply themselves to things they don’t like. But Isha had a goal in mind and she made the decision to make the sacrifices necessary to achieve it.

She wants to be the CEO of a tech company one day. She decided to map out a life plan, knowing that to execute it, she would have to go above and beyond her perceived limitations. She wanted to do well in school, go to college to study computer engineering, then get a Master’s Degree from California University of Technology, which could land her an internship in Silicon Valley. She wants an MBA from an Ivy League school, which would put her well on her way to becoming a CEO. With the goal defined, Isha knew she had to have laser-sharp focus and work hard to pull her grades up and finish high school strong.

Isha’s family helps her settle in at the University of South Florida, where she received the USF gold and green award, with a $9,000 a year scholarship

“Around the time of BGCSE’s (grade 11), I was applying for colleges and I realised that the grade point average (GPA) is a really important part of college applications,” Isha explained.

“It was the last few terms of high school and I knew I had to pull it up. If I know the reason for something, I do better. I knew that SAT scores are important for college, so I did well in them. I worked hard to do well, knowing that this was my last chance to prove myself.”

Prove herself, she did. Isha graduated with a 3.5 GPA and 11 BGCSEs. She got 10 As and one B. She got As in Mathematics, English Language, English Literature, Religion, Geography, Chemistry, Physics, Graphical Communication, Art and Keyboarding. Her only B was in French. She did so well that she was the best overall in the country in the BGCSE examinations, claiming the Paul L Adderley Award and the Carol Hanna award for Best Overall Performance in the 2019 BGCSE examinations.

“I remembered when missed a cutoff mark for Biology. I decided to turn

Isha Rama as a toddler in her native India and as a little girl in Singapore.

that frustration into determination. I set a goal for myself, and it’s about how much I wanted it. I would always think… ‘Is this going to help me to be a CEO someday?’ Even if you don’t have a goal yet, you can make doing well in school your goal.”

Isha’s parents Janakiraman Kesavamoorthy and Shamshia Hassain made sacrifices to help her along the way. She said they would always find a way to get her the things she wanted, as long as she was willing to work hard for it. With love and loads of encouragement, Isha’s parents pushed her to be her best.

She also benefitted from having a great environment at her school, Queen’s College. Isha explained: “The teachers were very helpful. You could go to them at any time and they wouldn’t act like you are bothering them. They would find different ways to give you extra help. They were very supportive. My favourite teacher, Mr Cargill, is not only a teacher, but a friend. He was so fun and sweet that we wanted to do good in his class.”

In addition to the support of teachers, Isha says her friends all stuck together and helped “push each other up”. This included her best friend Nathan Allen, Queen’s College’s valedictorian. She said her friends, when studying, would wait and make sure that anyone who did not understand grasped the concept before they all moved on. This type of environment was a formula for success. It is proven in the fact that the 2018 BGCSE most outstanding achiever for 2018, Whittley Deleveaux, also graduated from Queen’s College. She, too, won the Paul L Adderley and Carol Hanna Awards.

The 2020 graduating class of QC will be like no other, she mentioned. She and her friends were looking forward to graduation, but the COVID-19 pandemic changed plans for graduates all over the world. It “sucked” that plans did not go the way they dreamed of for years. However, Isha says she can’t complain when “there are people dying all over the world”.

Isha came to the Bahamas at the age of 12. She was born in Chennai, South India, and her parents moved to Singapore about a year later. Isha’s education in Singapore was of the highest quality. Life there was very different there, and her description of the life she lived there lends great support to the kind of life we should have on such a small island with a small population.

Singapore, she said, is organised, orderly and safe. It is strict, in some ways, but you wouldn’t notice it because “everyone just follows the rules”. Singapore was so safe growing up for her, that children could walk home alone. She and her friends would play between 6pm and 8pm almost daily, without fear. There are lots of malls and shopping options, events, and restaurants – the city is one that is alive practically 24/7. Singapore is an island, like New Providence. But with millions of people living there, somehow the people have learned how to live a civilised lifestyle, one where peace and safety are paramount. It is also described as a fast-paced, but very clean metropolis.

Isha’s father, who is in banking, got a job that brought their family to our sunny archipelago and here Isha fell in love with the beach. She also got over the cultural shock to make great friends.

Today, Isha is attending the University of Florida and is majoring in Computer Engineering. This should make her mother proud, as she is in the same field. It’s very different going to school with a mask, but Isha is ready to rise to every occasion to take advantage of every opportunity that will lead her towards her goal.

She is happy her parents are in The Bahamas because the close proximity to America means she easily come home to feel the love and support that has taken her this far. I wish her the very best!