64 New Cases Of Covid-19 On Wednesday 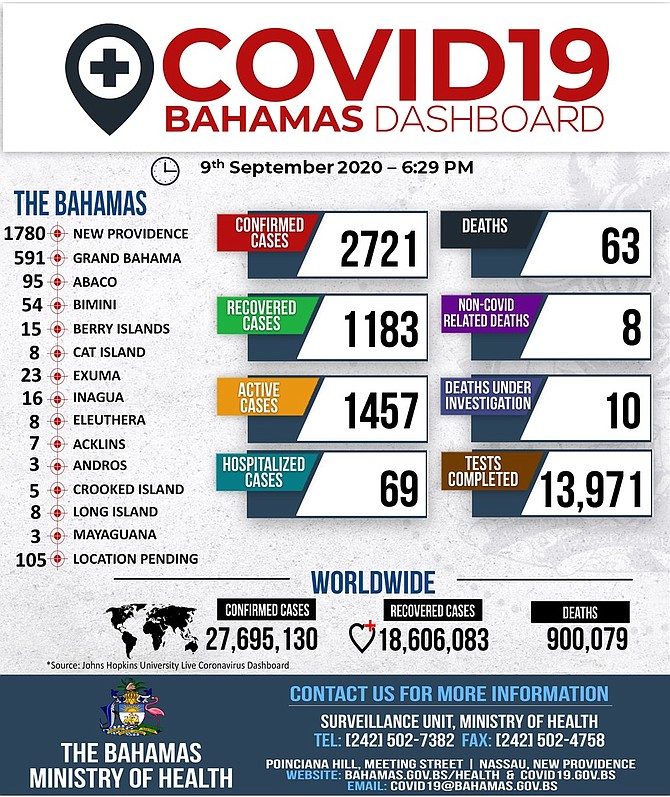 SIXTY-FOUR additional COVID-19 cases were recorded yesterday, bringing the total to 2,721, according to the Ministry of Health.

There are 1,780 confirmed cases in New Providence; 591 in Grand Bahama; 95 in Abaco; 54 in Bimini; 23 in Exuma; 16 in Inagua; 15 in the Berry Islands; eight cases each in Cat Island, Eleuthera and Long Island; seven in Acklins; five in Crooked Island and three each in Andros and Mayaguana. There are 105 confirmed cases with “locations pending”.

Of the newest cases, 55 are in New Providence, two in Grand Bahama, three each in Crooked Island and Inagua while there is one new case in Mayaguana.

Earlier yesterday, officials said 72 cases had been recorded on Tuesday along with four COVID-related deaths.

“This reduces the number of deaths under investigation to ten, increases the non-COVID related deaths to eight, and the death toll now stands at 63,” the ministry said.

Officials said 13,971 tests have been completed to date.

what is a noncovid related death and why are we counting them? did i miss something in class teacher?

I believe a noncovid related death is someone who has been tested positive for covid who subsequently dies but covid is deemed not to have been the cause of death.

That's it exactly. It's still counted in the overall total cases because it's a positive test result, but it's not counted as a COVID death.

... even more interesting is that I recently found out that autopsies are not being performed on suspected COVID cases, so how do they know what caused the death?? This is just an attempt to keep the deaths from the virus as low as possible. Minnis did the same thing in 2012 with dengue. People were dying WITH dengue, not FROM dengue. The official death toll for deaths from dengue was 1 !!

When will people start to behaving? After they have given everyone this COVID?

Some people refuse to believe it's a problem until it happens to them or their family.