Chisholm Hits His First Home Run In The Majors 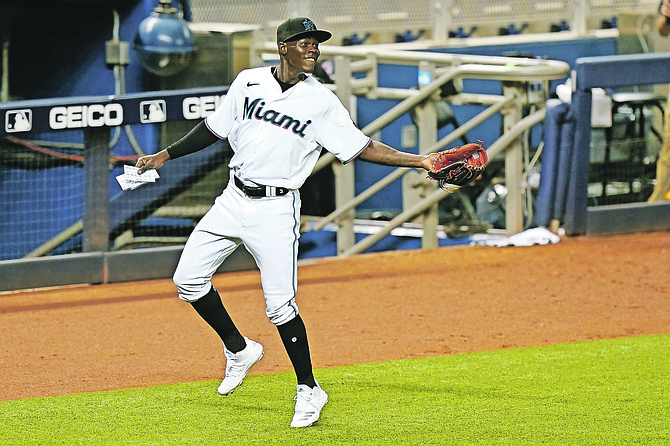 Miami Marlins infielder Jazz Chisholm is shown during the eighth inning of a baseball game against the Toronto Blue Jays on September 1 in Miami. Chisholm had his first major league home run, RBI, triple and multi hit game in the Marlins 29-9 loss to the Atlanta Braves last night. (AP Photo/Wilfredo Lee)

Jasrado “Jazz” Chisholm was searching for a breakthrough at the plate and it finally came in the first at bat of last night’s series finale against the Atlanta Braves.

Chisholm had his first major league home run, RBI, triple and multi-hit game in the Marlins’ 29-9 loss to the Atlanta Braves last night at Truist Stadium in Cumberland, Georgia.

He became the third youngest Marlins player to have a game with a home run and a triple. The only players to do it at a younger age were Giancarlo Stanton and Jeremy Hermida.

In his third start and second consecutive at secondbase, Chisholm had his most productive game offensively and finished 2-4 with two RBI and one run scored.

In the top of the fourth and facing the Braves’ Tommy Milone on the mound, Chisholm faced a 2-1 count and drove an 84 mph four seam fastball 403 feet to centrefield for his first MLB home run.

After a pair of sliders to go ahead 2-0 in the count, Chisholm got caught looking for a strike on an 84 mph four-seamer. Milone attempted to go to the same pitch again and Chisholm responded with the solo shot. It was the same pitch Chisholm hit earlier in the game for a triple.

His homer was the first of three runs in the inning for the Marlins to trim the deficit 13-8. The Marlins surrendered tbose runs in the bottom of the fourth when a Freddie Freeman single ricocheted off Chisholm to score three runs and regain a 16-8 lead.

In his first plate appearance of the game, in the top of the second inning, Chisholm faced a 1-1 count. On the next pitch, he drove an 87 mph four seam fastball to deep right centrefield, just over the outstretched arm of Ronald Acuna Jr.

His first major league RBI scored Jorge Alfaro and the Marlins took a 2-0 lead. It would be a short lived advantage as the Braves responded with 11 runs in the bottom half of the inning to go ahead for good. It was his second consecutive start at secondbase and third of his career thus far. He came into the game with just one hit in his previous 16 at bats before he recorded his first MLB multi-hit game.

The Marlins concluded with a 2-1 edge in the series but once again fell to .500 at 19-19 on the season.They begin a seven-game homestand against the Philadelphia Phillies at Marlins Stadium in Miami, Florida.

I don't follow baseball but this guy looks like a star in the making if not already made. I hope so.