Shavaul Butters All Set For Transfer 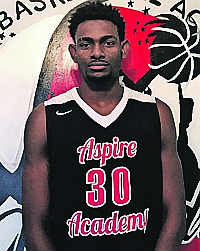 SHAVAUL Butters will relocate to a new state to complete his senior season of high school basketball and prepare himself for collegiate recruitment in the class of 2021.

The Grand Bahama native will transfer to Elevation Prep in Fort Wayne, Indiana, after he spent last season with Aspire Academy in Louisville, Kentucky.

“Elevation Prep is a preparatory high school and postgraduate basketball academy,” according to its website. “Our mission is to provide our student-athletes with a holistic college experience to best prepare them for their careers as collegiate athletes and beyond.”

Elevation partners with Lakewood Virtual School and local area colleges and universities to provide its student-athletes with an accredited academic experience.

Butters has begun to garner attention from major Division I basketball programmes and received his first offer of what is expected to be an active recruiting process this summer.

He was officially offered by the Austin Peay State University Governors. The Governors compete in the Ohio Valley Conference and most recently made the NCAA Tournament in 2016.

The only member of the roster to compete in all 33 contests last season, he led the team in several statistical categories in his first year with the programme.

He shot 64 per cent from free throw and also finished with 32 total blocks, 28 steals and 35 assists.

His season was highlighted with 30 points, 21 rebounds and two blocks against Tennessee Prep last December at the Marshall County Hoopfest in Kentucky. In the classroom, Butters has a 3.0 GPA and a score of 20 on his ACT.