Ex-Mp Tells Gov't: 'Let Us Get On With Our Lives' 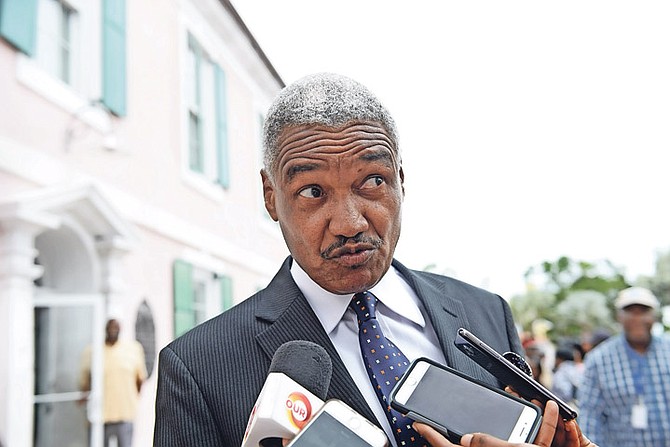 A former Cabinet minister yesterday urged the Government to "execute the leases so my family and I can get on with our lives" after the Supreme Court awarded him nearly $10m in damages.

Leslie Miller, the former Tall Pines MP, told Tribune Business he saw "no reason" why the Minnis administration should not give effect to the five contracts committing the Government to rent space for multiple public agencies at his Summerwinds Shopping Plaza off Tonique Williams Highway.

Speaking after Justice Cheryl Grant-Thompson determined the initial damages at $9.8m, Mr Miller pledged that "the truth will come out" as he denied that the five leases agreed under the former Christie administration represented a 'sweetheart deal' or provided him with any favours.

Declining to go into detail on the award, he told this newspaper: "I just want to get the matter resolved on behalf of my family and employees at Mario's Bowling and Entertainment, and carry on with life....

"We have been vilified in media but I can take the blows, ridiculing me and my family. The truth will come out. People will see that we got no special privileges. We simply did our job, that's all we did. We didn't take advantage of the Government or the Bahamian people."

Mr Miller added that with "COVID-19 going to be around for some time", the Government and its agencies will need all the accommodation and office space they can get especially given the need to comply with social distancing and other virus counter-measures.

"Execute the leases so we can get on with our lives," the former Cabinet minister pleaded with the Government. "We see no reason why they [the Government] would not go ahead with those leases.

Tribune Business reported earlier this year that Justice Grant-Thompson had given a given a verbal pre-Christmas 2019 ruling in Mr Miller's favour, with just the amount of damages and the written verdict awaited at that time.

Carl Bethel QC, the attorney general, in a messaged reply to this newspaper's inquiries last night, confirmed that the Government plans to appeal the ruling and damages award. "Yes, we do intend to appeal," he said. "We applied for leave to appeal to the judge because the rules require that we apply to the judge first. I have no further comment on a live matter."

Mr Miller's lawsuit, filed last July, had been seeking a Supreme Court declaration that the five leases entered into on December 1, 2016, by the former Christie administration are "valid and binding" upon the Government. He also accused the latter and Bank of The Bahamas of participating in an alleged "unlawful conspiracy" to seize that his Tonique Williams Highway property.

Those leases were among the contracts identified by K Peter Turnquest, deputy prime minister, during the 2018 mid-year Budget debate as "handcuffing" the Government's financial plans. It was one of two cases he cited where the Government owed between $13-$14m for property leases and had "no exit clauses", even though "not one single government worker has ever set foot in the building".

However, Damian Gomez QC, Mr Miller's attorney, previously told this newspaper that the Government and Bank of The Bahamas' conduct had been "really catastrophic" for Mr Miller and his companies.

He said the former's failure to follow through on executing the leases, and the refusal of both to finance contractually-agreed upgrades to the property - as well as the loss of rental income - had left the companies' unable to repay the loan with the BISX-listed bank.

Besides claiming damages for the loss of multi-million dollar rental income, Mr Miller also accused the Minnis administration of deliberately refusing to follow through on the leases signed by its predecessor knowing it "would trigger a default" on $25-$28m worth of loans owed to Bank of The Bahamas, thereby paving the way for the bank and the Bahamas Resolve bail-out vehicle to seize control of Summerwinds Plaza.

Mr Miller has described the leases that were entered into in December 2016 as "a win-win" for all parties given that the rental rate was 45-55 per cent lower than that typically enjoyed by the Government.

The outspoken added that the main potential tenant was the Immigration Department, which had been lined up to lease some 98,000 square feet at the former Robin Hood store. Other government departments supposed to join it were the Registrar General's Department, Public Parks and Beaches Authority and Parliamentary Registration (voting) Department.

Despite Mr Bethel's threatened appeal, the present outcome of Mr Miller's case is also likely to encourage those with similar legal claims against the Government. One such action involves businessman and accountant Kingman Ingraham, who is seeking at least $30m against the Government based on its alleged breach of an irrevocable lease agreement to rent the former Kelly's Warehouse on Soldier Road for the Department of Public Health - a situation that has placed his family home in jeopardy.

Corruption is now being rewarded by the courts.

You see that! What a grand Country we live in. It gets curiouser and curiouser, or wussa and wussa.

I don't support Mr.Miller.However the man had a legal binding contract with the government.That contract was signed by a senior government official.

He simply went to court to enforce the contract.This FNM government cannot simply choose not to honour these contracts.If there is an element of fraud,corruption in them once proven,they can.However they did not prove that in this case.Their only feeble excuse was that there was not a written contract.That was disproved when his lawyers presented his copies to the court.Then they miraculously find their copies.Every body is try to play slick in this country.

There were contracts signed on the last day of the Ingraham government in 2012.The PLP who came to power honoured them.One of those contracts concerned aragonite mining.The PLP government knew exactly what would happen if they did not honour them.

A lot of people in this town has gotten burn by this government.A whole series of lawsuits will be launched against this government.I blame the current prime minister for this.A former FNM cabinet minister said he does not listen and follow good advice.

lawfulness aside - who signs a lease agreement with no exit clause? is that really in the People's best interest? is that standard practice? i got a piece of land i want to lease gobmint for a huge sum of money and guaranteed income with no exit clause for 10 years. Where do i sign? I believe every large contract of this kind should be very public so the people can make up their own mind on whether they want to be saddled with more taxes. Miller play with fire and get burned.

He like "hey you have to pay me the slush I spent years campaigning for." Hey if Brent gets it then why not miller hey?

No other place can conflict of interest be so legal and handsomely rewarded but in the arena of politics and government. Now y’all see why I don’t take politicians and governments seriously?