Foundation Steps Up To Aid Bahamians 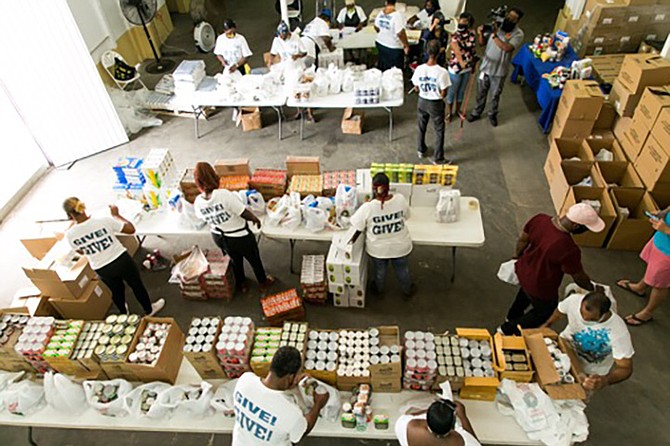 THE Lyford Cay Foundations has announced $1.5m in grant funding to support the Bahamian community with food assistance.

In May, its board and generous granted $275,000 to various local feeding organisations to support them during a spike in demand for food assistance. Six months into the pandemic, with record levels of unemployment and thousands of households needing support with food aid, the additional commitment of $1.5m — to be disbursed as monthly grants — will continue to supplement emergency food relief operations of Bahamian NGOs as they address the immense need of Bahamians across the archipelago.

“The fight against hunger is a collaborative effort, and we are grateful to have a thoughtful and compassionate partner in Lyford Cay Foundations to allow us to further continue our mission of feeding the most vulnerable in our communities particularly those impacted by COVID-19,” said Sean Brennen, director general of the Bahamas Red Cross, which has received $105,000 in grants so far from Lyford Cay Foundations towards their food aid efforts.

Also receiving $105,000 in grants from Lyford Cay Foundations, the Bahamas Feeding Network has since June distributed 40,000 food parcels with items totaling more than $1m in value to families in northeastern New Providence, as well as in eight southern Family Islands.

“Since June, we’ve basically tripled our efforts, and our numbers are still rising,” said BFN executive director Philip Smith. “I praise Lyford Cay Foundations for their support during this time.”

The chairman of the board of Lend a Hand Bahamas, which has become the food zone leader for Nassau, echoed these sentiments. The group has benefited from Lyford Cay Foundations grants totaling $135,000 so far to supply food parcels to 13,500 households per week in the most densely populated area of the country.

“It’s great to have this opportunity through the Bahamian government to feed people, but the reality is that the needs are so much greater than what we could ever ask for and requires private support,” said Lucas Metropulos. “It’s organisations like Lyford Cay Foundations that come in during a critical time to help us address these needs, especially when we have a spike like we’ve seen recently. It’s a tremendous help.”

Hands for Hunger is partnering with Showman E-Bistro to deliver food parcels to 6,500 families a week, and grant funding of $75,000 from Lyford Cay Foundations has assisted.

Hands for Hunger multimedia manager Aarone Sargent said: “Donations like those from Lyford Cay Foundations go a long way in helping us to assist so many more people in a sustained state of food insecurity.”

A further $125,000 has been granted to the Salvation Army for their food voucher programme, and grants from August through December will continue to feed 500 families a week.

Lyford Cay Foundations has also provided grants to organisations on Eleuthera and the Abacos.

IDEA Relief received $65,000 in grants so far, and is helping 13,000 Bahamians a week across the mainland and cays.

Grants totaling $39,000 have also been given to the Eleuthera Feeding Initiative by the One Eleuthera Foundation, which provides food vouchers to 7,000 Bahamians.