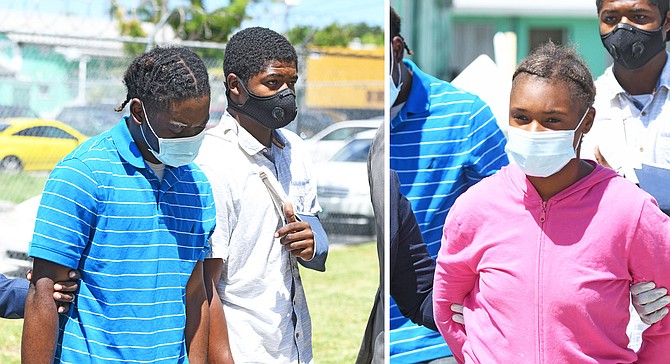 Demetrius Bastian, 19, Kelito Johnson, 18, and Mya Smith, 18, appeared before Magistrate Samuel McKinney accused of robbing a man of a $150 silver rope chain and charm along with $3,000 cash on September 10.

All denied the allegation and the matter was adjourned to October 27 for trial. Bail was denied and Bastian, Johnson and Smith were remanded to the Bahamas Department of Correctional Services. They have a right to apply to the Supreme Court for bail.

In a separate incident, a 40-year-old man was remanded to prison over allegations he assaulted two people with a cutlass last week.

Lavardo Lightbourne was charged with two counts each of assault with a dangerous instrument and threats of death, after he was accused of wielding the instrument at Patricia Gibson and Samuel Pratt on September 4.

The prosecution alleged the defendant threatened to kill the two complainants.

Lightbourne denied the allegations and the matter was adjourned to November 24 for trial. He was denied bail and remanded into custody.