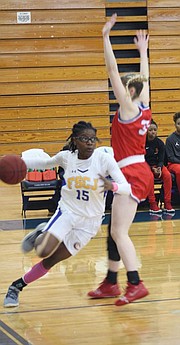 Valicia Demeritte on the dribble.

Regarded as one of the top young female basketball players in the country, Valicia Demeritte is holding court as a small forward for the Coker University Cobras in Hartsville, South Carolina.

The 20-year-old former player for the Kingsway Academy Saints left the Bahamas in grade nine in 2015 to enroll at the Potters House Christian Academy in Jacksonville, Florida, where she played for the Lion’s basketball, volleyball and track teams, earning the most improved player award and was a four-time SIAA State champion.

After graduating in 2018, she went on to play basketball the past two seasons for the Blue Wave at Florida State Junior College in Jacksonville where she made the Mid Florida All-Conference second team.

Having transferred this year to Coker University, Demeritte is now preparing for her final two years of eligibility with the Cobras in what has been a totally different environment due to the coronavirus pandemic.

“From JUCO to DII, it’s different. JUCO, you’re like a sophomore when you’re a freshman, so you have to work for everything,” Demeritte said. “In DII, you only have to keep it going for two years and get your degree.

“It’s kind of tough, but JUCO has prepared me for this moment. I think if I didn’t go to JUCO, I would not have been prepared. I think JUCO has really prepared me.”

Although things have changed since she began her junior year at Coker University with the pandemic reshaping the landscape of sports around the world, Demeritte said the Cobras’ coaching staff is getting them prepared for the 2020/21 season.

“The plan is for us to play in our conference from November 1,” said Demeritte, as they continue their daily practices and exhibition games before the season opener. “We haven’t heard anything about any change in the plans yet.”

Demeritte, however, noted that the atmosphere on campus is not what she anticipated and some of her team-mates, who are returning from last year, admitted that it’s not as fun filled this year with everybody occupying their open space. “Everybody can’t be in the same place at the same time, so we can’t really interact as much as we want to,” she pointed out. “Even when we come to practice, they have cut the team in half with only about seven players at a time.

“So we don’t get to see all of our team-mates at the same time. It’s kind of weird. This is what we have to do to get over the coronavirus to get back to normalcy.”

Despite all that is going on, the five-foot-nine-inch Demeritte still has an obligation to fill with the team.

“On the court, my coach expects me to be the athletic player that she recruited,” said Demeritte of coach Hash. “She said she hopes that I can defend my position and rebound the ball.

“She said she saw my tapes from JUCO and she believes that rebounding will be my strength and so she wants me to be the defender that she saw when I played.”

The exercise science major said her personal goal is just to enjoy the process.

“I came a long way from when I left Nassau, so I just want to enjoy the process and get better,” she stated. “I just want to play my role on the team, don’t do too much, just play my role and live in the moment and have some fun because in a minute, it’s going to be over.”

As a junior national team player from 2012-2016 and senior national team member in 2018, Demeritte said her goal is to once again represent the Bahamas at the international level, but she also wants to go on and play professionally, preferably in Europe.

“I want to play overseas professionally, but it’s whatever God plans for me. Whatever happens, happens, but my plan is to play overseas,” Demeritte said. “I just saw my team-mate Briontae Riley make it in France, so that has given me some motivation.

“Briontae has been through a lot, but she’s a fighter. All the adversities and setbacks that she experienced, she’s motivation for me. Anything is possible. I can’t wait to see what happens for me in the future.”

For those players who have not been given the exposure to play college or even get to the pro ranks, Demeritte encouraged them to continue to press on. “You’re not going to be the basketball player that you want to be overnight. It’s a process,” she said.

“Enjoy the process and the more you enjoy it and work on your craft, you will enjoy it more when your time comes. “Just keep pushing and your time will come. You never know who is watching you.”

As she goes through the process, Demeritte thanked God, her parents Valerie Demeritte-Watson and Andretti Demeritte and coaches Varel Davis, Deven Johnson, Randy Cunningham and the late Sherman Smith, as well as Simone Beneby, for getting her to where she is now.

Coach Davis is the type of coach who always has my back,” said Demeritte, who played with Davis on the junior national team since she was in grade six until last year when she made the senior team.

“Coach Deven was there for me too, but if I pick up the phone and call coach Davis to ask her about anything, she has always been there for me. She’s like family. She watched me grow up.”

Aside from basketball, Demeritte said she’s learning a lot about herself living in a different culture and trying to stay rooted, not trying to change the things that she was taught as a Bahamian. So far, she’s handled her situation very well.