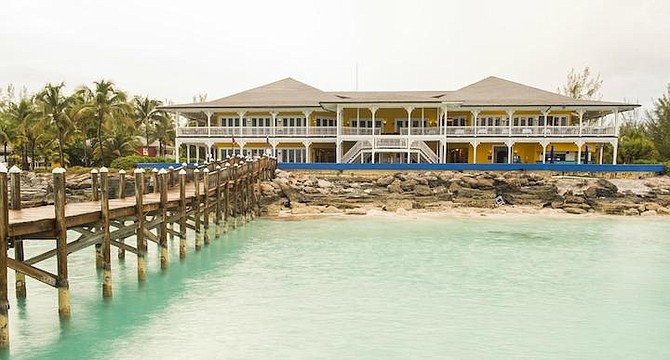 EMPLOYEES at San Salvador’s Club Med yesterday described the resort’s decision to push back its re-opening date to December 2021 as a major “shock” and “big blow” to the island.

They say the move has left many workers uncertain about their future with the company.

Workers say they are also unsure as to how they will make ends meet.

“It is a big blow to the (island’s economy) and the majority of the people on this island work in Club Med,” said Rochelle Forbes, a resident in the community.

Ms Forbes, who is also a longtime employee at the hotel, said while workers had known the resort would not resume operations right away, they did not expect the reopening date to be postponed all the way to the end of next year.

“When they announced it, the majority of us had already known,” she said. “We just wanted confirmation to know if it was true. We had already known about the closing of the hotel, not opening until 2021.

“They were (first) saying December of this year but when I listened again, they said 2021 and my mind was like, everybody was in shock. We could not believe that for a whole year, almost two years and we will not be working.

“But like I said, a lot of us had already known but we just didn’t know it was gone be that long (sic).”

The resort was shut down in March after the government banned international flights from France, it’s main tourist source market, because of COVID-19.

In a letter to Prime Minister Dr Huber Minnis, Clement Maynard, an attorney representing Club Med, noted that concerns about San Salvador’s ability to handle a health crisis had factored into its decision to postpone re-opening.

“As a precaution to ensure the safety of the Bahamian residents of the island of San Salvador and the health and safety of Club Med’s staff, guests and providers, the difficult decision has been made by Club Med to postpone the re-opening of the Columbus Isle Resort until a later phase in December 2021,” he wrote.

However, some workers say they do not even feel confident that the resort will ever reopen its doors again, a situation that has left them uncertain about their employment status with the company.

“Really and truly, we don’t feel like we’ll ever re-open,” said Regina Kelly, another resort employee. “They had a Zoom meeting with us two days ago. They are not even discussing the fact that we are redundant. When we brought it up in the meeting or whatever, they were like ‘y’all smart, y’all been thinking that far.’”

“This affects everybody – the guys who does the international flights. Everybody is going to feel the pinch of Club Med’s (protracted closure). It’s not just the employees.”

San Salvador remains one of the few islands in the country that is essentially COVID-19 free.

Because of this, residents say they are reluctant to leave the island in search of other job opportunities due to an increase of cases across the country.

“It isn’t the same like when we was closed last time,” Ms Kelly added. “People could relocate to Bimini and Nassau. You can’t do that now because islands have corona so for you to pack up and leave your sure for unsure, that don’t make no sense.”

For her part, Ms Forbes said the situation is also worrying because staff members are still waiting to receive their vacation packages to help assist with financial obligations.

“Usually this is our time for closing because of the hurricane season,” she said. “But by this time, we should have already gotten our vacation pay so a lot of people were looking forward to their vacation pay so like I said, only the good Lord gone help us.

Bahamas Hotel, Catering and Allied Workers Union’s (BHCAWU) president, Darrin Woods, when contacted by The Tribune yesterday, said the union has already reached out to government officials on the matter as San Salvador residents cannot manage more than a year without work.

“We telephoned and we sent a letter requesting a meeting and we (are) just waiting for their response and we said to them that this is something you can’t just sit down (and wait), this is now,” he said.

“…Because Club Med is the major employer on that island and on that island, each household has a minimum of at least two persons working at the club.”

“And what Club Med said was because of them being on an remote island with limited resources, infrastructure, reduced airlift, (they) could not guarantee the safety of the resident, the employees, the guest and their partners.”

“I believe that we now need to secure as best as we can some sort of relief by way of looking at whether (there are) makeshift health care services down there and you could always talk to the airlines to talk about increased airlift even though their people travel direct.”

Many of these properties may never re-open because of the absence of significant levels of tourist traffic from both North America and Europe for the foreseeable future, possibly many years.

One of the major Cruise Line companies have already put up 18 cruise ships for sale. Many US airlift tourist carriers have put away large sections of their fleet, but the good part is that the US airlift carriers still have the deepest pockets and can afford likely best ever competitive prices etc until situation improves.

Not all chief architects get a chance to stick around see their vision become a reality. So it is of Comrade Cecil Whitfield. A growing number amongst the red party's most loyal supporters have voiced privately that had Comrade Cecil lived on the current House-elected would've come up some lame authoritarian excuse done expelled em' from the party.
You'd have try really hard to make this sobering thought stuff up. Just couldn't. A nod of Once for Yeah, Twice for No?