101 New Covid-19 Cases, One Additional Death, One Death Under Investigation 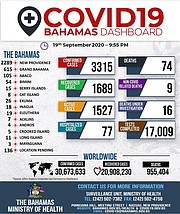 The Ministry of Health reported that there were 101 newly confirmed cases of COVID-19, one additional death and one death under investigation on Saturday.

Sixty-nine of the new cases were in New Providence, eight were in Grand Bahama, one was in Exuma and the locations of the other 23 cases are pending.

A 69-year-old man of New Providence died on September 18th bringing the death toll to 74.

The Ministry also said that the death of 30-year-old woman of New Providence who died on September 18th is currently under investigation.

We're going to need a larger morgue. Plenty Bahamians are going to die...

I see a bunch of house parties in Freeport, bars are packed daily with no one wearing masks.

This country is about to explode. Again.

I understand wanting to get back to normal, lord knows I'm tired of staying at home but we should at least be wearing masks and keeping our distance. And our country should be testing, tracing and isolating. We can't just ignore it and allow people to die.

Our people can control this, all we need to do is be smart. As it is now we can forget tourism, forget a healthy economy, forget a normal life. Until a legitimate vaccine is available we will suffer. Greatly.

We'll certainly need a larger morgue because bahamians this past week have been killing each other at an alarming rate...and the police like usual have been ABSOLUTELY USELESS!!!

Anyone notice these pending cases never go down at all

They are not meant to go down. They cannot match the test to the subject because they did not take the info correctly.

Like the fella who walked away from the test line , never took the test, and later got a call saying he was positive.

he took the new non-invasive rapid tests...it tests without contact. if positive it subconsciously sends you home and calls you with the result.

What the hell is this, we have been like this for over a month . You'll need to stop messing around . At this rate, we will be financially screwed.

Do you really think that having 250 NEW CASES in the last week (since Sept 14th) is nothing, let's not forget about previous 2 weeks. This is not going to entice any visitor to come & spend their hard earned dollars and risk dying of a horrible disease that makes one drown in your own lungs mucus? Too many people have drank the Guyana flavored kool-aid (look it up) preached by No-Mask TRump. The vaccine is a year away from reaching the Bahamas, cant run over to Florida & pick up a dozen at Walmart. Be Smart Bahamas.

Already at 99 (confirmed) deaths, we'll hit 100+ tomorrow and its not looking good at all! Things are about to get REAL NASTY with the upcoming flu-season, and bahamians somehow think everything is back to normal...partying like wild animals with no masks or any social distancing!

And many still expect the government to wave a magic wand to keep the virus contained. There are at least 50-90 people in New Providence contracting this virus every single day. Until our citizens take personal responsibility for their own safety, these numbers will continue to rise.

The New York Times (Aug 31) reviewed COVID test data compiled by officials in New York, Massachusetts and Nevada and determined that up to 90% 0f those testing positive with NO SYMPTOMS CARRIED NO VIRUS OR SUCH A SMALL AMOUNT TO BE OF NO DANGER WHATSOEVER.. Time to stop using the sledgehammer to kill tourism and this economy before its too late!

There are NO TOURISTS! Haven't you noticed? Talk of opening up to tourism next month is a waste of time. Until we get this virus under control no tourists will be coming here any time soon.

The NYT report explains why the huge number of "reported cases" (positive tests on people who show no symptoms) may be grossly exaggerated! The present test is far too sensitive .It is still in development according to the experts.

And do you think the number of bodies in the PMH morgue is exaggerated as well?