Dames: We Will Catch The Killers 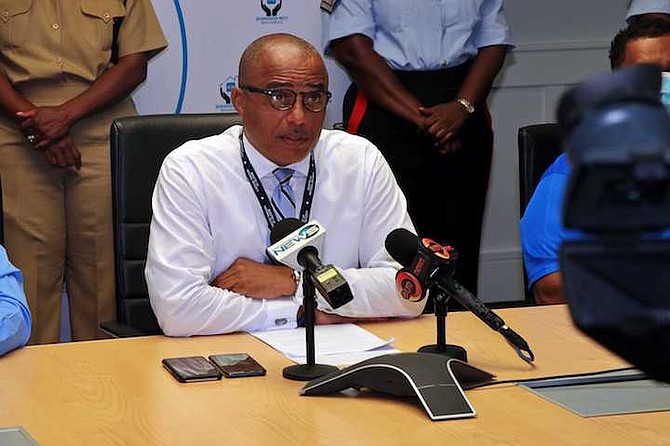 NATIONAL Security Minister Marvin Dames yesterday issued a stern warning to the perpetrators responsible for killing a seven-year-old boy in Nassau Village on Sunday night, insisting that he has “every confidence” the Royal Bahamas Police Force will find them.

His comments came hours after the child was shot dead after a gunman opened fire outside his residence that night, during a reported drive-by shooting.

Reyes Williams, who was killed on Sunday night.

Police did not release the victim’s identity, but he has been identified by close relatives as Reyes Williams. Three people are said to be helping police with the investigation.

“I think it would be remiss if I fail to certainly acknowledge and send condolences to the parents of seven-year-old master Williams who was gunned down so tragically last night in the Nassau village area,” he said at a press conference yesterday.

“And so, it’s fitting that we’re here today talking about police community relations and how we can improve our efforts nationally within the communities throughout the Commonwealth of The Bahamas.”

He added: “It is very important to note therefore that each and every one one of us have a vested responsibility in ensuring that our communities are safe and to the cowards out there who committed that very tragic act last night, I have every confidence that Commissioner Rolle and his team will find you.”

He also urged anyone with information to come forward and assist the police with their investigations to catch the “cowards” responsible for robbing Williams of his life.

“And this is a testament too to demonstrate who we are as a people because I am certain that there is someone out there who knows who is responsible for this act and I trust that you would bring that individual in as quickly as possible or you will communicate to the police who that person or who those persons are.”

Williams’ killing pushes the country’s murder count to 50 for the year, according to this newspaper’s records. He is one of several children who have been wounded by gunfire this year, but the second to have been shot fatally.

Calling for an end to the “senseless killing of children,” the Bahamas Christian Council yesterday pledged their solidarity with the RBPF in bringing those responsible to justice.

“The Bahamas Christian Council strongly condemns all acts of violence most especially the killing of our young children as well as our teenagers and young adults, many of whom have been taken away from us much too soon and certainly before they were able to realise and fulfil the God given potential and purpose,” the religious group said in a statement yesterday.

“The murder of innocent children is unacceptable, and we stand with the leadership and members of the Royal Bahamas Police Force in their efforts to bring the person or persons responsible to justice as soon as it is humanely possible.”

According to Police Commissioner Paul Rolle, three individuals are currently in police custody assisting officers with their investigations.

“CID (Criminal Investigation Department) is continuing their investigation in that matter as we speak,” the police chief said.

“We just left the ministry and we have a team from neighbourhood watch that we have dispatched into the Nassau Village community to speak with those persons in their area so we are hopeful that we will be able to bring some resolution to this in due course.

“But I still want to appeal to persons who may have information as to who is responsible for that murder this morning with the seven-year-old to come forward and help us to solve this most heinous matter.”

Williams’ killing also comes after a woman’s body was found in an abandoned building on Dowdeswell Street Sunday morning and another woman was found washed ashore on a beach in Eleuthera on Saturday.

Police said foul play is suspected in both of those incidents.

Asked yesterday for an update on police investigations into those matters, the police chief replied: “The one in Eleuthera, the female, that is still early so we have to wait for an autopsy. We are speaking to a person of interest I would say at this stage because I don’t know the exact cause of death as it stands.”

Pertaining to the killing on Dowdeswell Street, Commissioner Rolle said officers are still in its early stages of investigation on that matter.

“We have to try and do some DNA and we also appeal to persons who may have (information) as to what may happen there to come forward and help us with that,” he added.

Whatever, Dames, whatever. This is a.very weak response to obtain political points. You need to take a.class in theater .

NO POINT! Even IF (a big IF because the police are USELESS) they catch the killers, they will be free in no time like every other murderer in this country, bring back the death penalty!