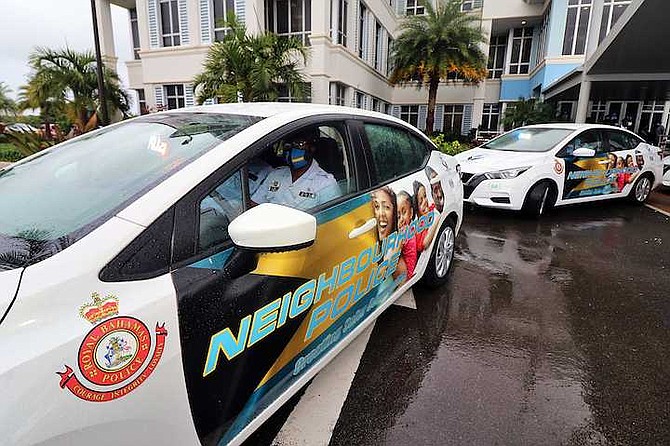 One of the new patrol vehicles. Photo: Eric Rose

THE Royal Bahamas Police Force has been selected “as the 2020 IACP leader in community policing” out of more than 100 competitors, Police Commissioner Paul Rolle announced yesterday.

The police chief gave the news during a press conference at the Ministry of National Security, which also saw liaison officers who are a part of the National Neighbourhood Watch Council being gifted with a fleet of patrol vehicles designed to help them better connect with their respective communities to reduce crime.

Commissioner Rolle said the accomplishment highlights the deep commitment of police officers to build safer communities throughout the country.

He also credited the National Neighbourhood Watch Council (NNWC) for helping aid the RBPF in its fight against crime.

“The Bahamas has done extremely well and being a part and a member of the International Association of Chiefs of Police, and we have one of our own officers who also in the person of superintendent, Dr Chaswell Hanna, who is privileged I might add to also serve on the executed of the IACP, which is essentially a body comprising well over 178 countries,” he said.

“And it is my privilege today that the Royal Bahamas Police Force has been selected as the 2020 IACP leader in community policing. That is for large, policing agencies and for that, I am humbled and indeed grateful.”

National Security Minister Marvin Dames, who was also present during yesterday’s press conference, commended the RBPF for the achievement, noting it as a demonstration of its “improved relationship” between the community and the police.

“The award given to the Royal Bahamas Police Force is an award that is cherished and sought after by many countries around the world. We have well over 165 countries that are involved in the IACP, International Association of Chiefs of Police with tens of thousands of numbers,” he noted

“And so, this is the number one law enforcement agency in the world today and to be recognised as the nation with the leading top community police programme in the world is something that ought not to be taken lightly. It’s something that is very special, and that award really demonstrates the ongoing relationship and the improved relationship between the police and the community.”

He also thanked the NNWC for its contribution in helping to create a safer and better Bahamas for everyone. The council, which is made up of neighbourhood watch group leaders and civil society, was launched in 2018 to assist with crime prevention.

At the time, Mr Dames told reporters the accomplishment of the Jubilee Gardens association showed the deep engagement of people helping, sharing and caring for one another.

... if we are number one in community policing it makes me wonder what other countries are doing!

“And so, this is the number one law enforcement agency in the world today ...”

The frightening thought is that he might actually believe this, as the award itself makes no such claim.

Judge 'em by the company they've been sharing.
The 2020 IACPCommunity Policing Leader Award was also handed out to the US's state of Minneapolis where the Minneapolis City Council in a veto-proof majority had to step-in block to prevent the done announced intent to dismantle the Police Department.
The state of Minneapolis republican elected city council voted to block an order to create a new system of policing public safety in a city where law enforcement has long been tarnished. . Just couldn't make this stuff up. Just couldn't. A nod of Once for Yeah, Twice for No?

Minneapolis is a city. The state is Minnesota.

My bad. Thanks for pointing out.

Maybe because of the statement made." If you confront the police be prepared to meet your maker"

Yay more cars. The polic force has probably ran through 1000 cars in a ten year period which is ludicrous. I'm sure next year we'll have 100 more

Here's revelation should shake all up. What if a forensic audit personal records revealed that on any given hour, day, week in any a given of the 12-calender months that 48% of all enlisted members of the Royal Constabulary is not performing enlisted policing required duties? A nod of Once for Yeah, Twice for No?

Just realized this announcement was a red herring to hide the fact that they have wasted money buying cars in this economy! This kind of deception is a new low!

The consensus among my insider comrades is the general election bell goin' soon rung, and within days rungin' - me has been promised some eyeball popping files for me to post a campaign review.

The Bahamian Police Force is a joke. Those cars will be destroyed in a few.weeks. Give them some.time to at least show their sweethearts the town in the new cars.

Ad a matter of fact, do something with the corrupt officers that write false traffic reports for their friends , so they can get off from paying damages in accidents. The insurance companies know about false traffic accident reports ,.does the commissioner not know? Every bahamian can tell you about corruption on the police force, Defense force, immigration officers, water and sewerage, BEC, and every other government institution, but our heads are.always in the sand.

Base on the distribution statistics of the force over the years, all those cars will properly stay in Nassau. So while many will complain, other islands wouldn't get any. I remember the manpower distribution from the manpower study, 78% in Nassau, 13% in Grand Bahama and other family islands have the rest. Send the police here in Grand Bahama and other places like Abaco where they could be more appreciated than in Nassau.

Clearly the competition was in the form of a draw from a hat. Cause our pigs ain’t good at nothing.

Giving them more cars or more anything just adds to the problem.

Wanna fix this police force the first thing to do is to take away tools, fire all the corrupt officials, officers and take away any tools.