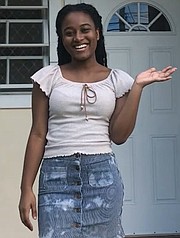 Out of more than 170 entries from 44 countries, Bahamian twelfth grader Sierra Blair captured first runner-up in the Girls’ Voices at Home video challenge – a competition which invited young women aged 13 to 26 to share how they are staying strong and continuing their education during the COVID-19 pandemic.

As first runner-up, Blair receives a $500 cash scholarship from the Seattle, Washington, organisation. A 21-year-old college student identified only as Debrah A from the Philippines placed first, winning a $1,000 scholarship.

“Although I didn’t place first, I was over the moon happy since it was my first-ever video competition and I’ve only edited eight videos since I picked up the skill in March, during the lockdown,” said Blair.

The 16-year-old developed her storytelling skill as a children’s author. She launched her first book, Roman & His Mean Family, on Amazon when she was only 13. Blair followed that up with her second book, Roman & The Pink Flamingos in 2018. Prior to the pandemic, it was sold at the Atlantis Resort, Ardastra Gardens and to the Ministry of Education.

Blair, who aspires to become a chef, developed her video editing skills after launching her Sierra & Roman’s Cooking Show on YouTube in March. Roman is her four-year-old brother.

“After posting the first episode of my show, my video editor’s computer crashed. I had to take matters into my own hands and learn how to edit my own videos if I wanted to continue the show, which I most definitely wanted to do,” said Blair.

“Learning to edit videos was born out of necessity not really an interest, but after editing the second show I thought this was a really cool skill.”

For several days, Blair mulled over the video project. Once she decided to enter, it took about a week to draft her script and shoot video clips.

“I tried not to hype it up too much in my mind. I know from first-hand experience when you think you’re going to win something and you don’t that can be disappointing, soul-crushing even,” said the private school student.

“My advice to other students would be to not let fear of failure hold them back from competing. I would recommend competing globally because you have anonymity. Nobody knows you didn’t win unless you tell them.”