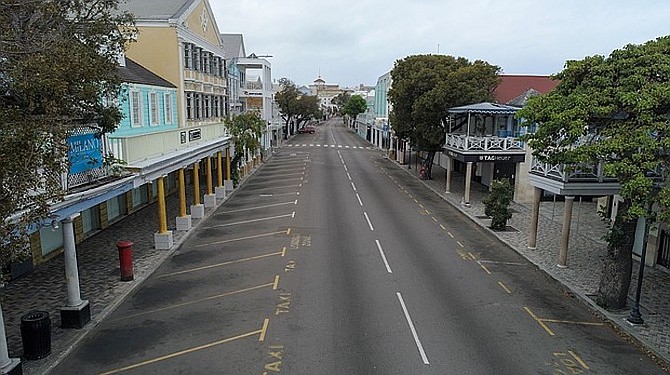 The Downtown Nassau Partnership's (DNP) co-chair yesterday backed the cruise industry's plan to restart with voyages to its private islands only, arguing: "It's critical they get it right."

Charles Klonaris told Tribune Business that Bay Street merchants, and other downtown Nassau vendors that rely on the industry such as straw artisans, taxi drivers, tour and excursion providers, restaurants, hair braiders and others face further sacrifice for long-term gain as the sector bids to resume sailing.

Speaking out after the cruise lines revealed their Healthy Sail plan to jump-start the industry's return, Mr Klonaris said they and the Bahamian tourism sector could ill-afford another COVID-19 outbreak on a ship as this would potentially destroy consumer confidence and set the restart back months.

For that reason he is supporting the cruise industry's decision to resume sailing only to its private islands initially, as this will enable it to test health and safety protocols in an environment that can be better controlled in terms of preventing COVID-19 infections.

"I think it's a start," Mr Klonaris said of the Healthy Sail plan. "For them to go to their private islands initially, I think they want to make sure the 'i's' are dotted and the 't's' are crossed properly. It's critical they get it right. If there's another problem on a cruise ship you're talking delays for another six months. It would be a huge setback.

"I support the initiative. I'm for it based on them getting everything right. I'd rather see it done right initially so they get comfortable and there's confidence with the customer coming on board. I think that's the first stage. If they get it right and the Government co-operates with them in determining when they start docking at Prince George Wharf, I welcome it and think it's a good stance."

Mr Klonaris, though, quickly conceded that the cruise industry's return plans are of little to no immediate help to Bay Street merchants and others who have now gone more than six months without any revenue, placing their very survival at stake.

"It's no help initially in downtown," he told this newspaper. "People are not too optimistic in the short-term. They know where their income is coming from, and traffic is coming from, so until we get the hotels open and the cruise ships coming back the city is going to suffer incredibly.

"If there's a continual problem with COVID-19 it's going to delay everything. It could be serious. They'll have to re-evaluate, and may come back with stricter protocols and possibly not use local tour operators for excursions. Getting it right, and co-operation between them and local tour operators, is the only way to go.

"Step by step is the right way. To open everything at once I think would be a mistake. It's not an easy process. We've got to rely on the cruise lines' expertise. It's a difficult issue and not everybody has an answer."

Other tourism stakeholders, though, were less thrilled at the cruise industry's decision to relaunch by passing Nassau and other locations where its economic impact is felt most in favour of their Bahamian private islands - something Dionisio D'Aguilar, minister of tourism and aviation, indicated the Government is prepared to accept to secure the cruise industry's return.

Peter Rebmann, Pearl Island’s managing partner, said of the cruise lines' plan: “This would be a catastrophe for every tour operator in Nassau. That would most likely mean first quarter 2021, no business at all. I would not understand the decision from the side of The Bahamas. We cannot hold the fort forever. Our last day of income was March 16.”

The cruise lines' decision to head to its private islands first, and only send passengers on pre-approved tours with Bahamian vendors whose health protocols have been vetted, had been long flagged in advance. This, though, means no cruise passengers wandering freely down Bay Street, and The Bahamas would appear to have little to no leverage over when ships will return to Nassau.

Some vendors even went so far as to suggest that The Bahamas not permit the cruise industry's private islands return unless it comes to Nassau. Reverend Esther Thompson, president of the Straw Business Persons Society, said: “I don’t feel like they should open the country to that. That doesn’t make any sense.

"Everyone is looking for opportunity, and if you allow them to do that they will continue to do that. I say open the country when everything is ready. How do you expect straw vendors and Bahamians at large to benefit? We need leaders with vision for the people. Our leaders are very short-sighted. Their vision is up there; their decisions are not benefiting the people on the ground.

Wesley Ferguson, the Bahamas Taxi Cab Union's (BTCU) president, said of the cruise industry's private island drive: “It was Michael Maura [Nassau Cruise Port's chief executive] and I who had a conversation, and I told him to get that out of his head.

Mr Ferguson added: “I told him I was very disappointed in that, because I told him if the cruise ship passengers were to come and the downtown businesses and people would not benefit, then they may as well not come. This is the same thing with minister (Dionisio) D’Aguilar and this VIP programme he wants to put in place; the poor people would not benefit from these people when they come to our shores.

"I would hope that the Bahamas government realises that in order to grow the economy the small man and poor people need to benefit. They need to re-open and be fully operational. One way they can accomplish this is to allow the small business people to benefit from the cruise ship passengers when they come back, and that is how you jump-start the economy, instead of trying to jump-start the economy from the top from the rich people who don’t need the support.”

It is uncertain, too, how cruise ship visitors will be impacted by the mandatory 14-day quarantine that The Bahamas has in place. And, of equal concern, is that the Healthy Sail plan calls on cruise lines to consider local COVID-19 infection rates, and a destination's capacity to test and contact trace - both areas where The Bahamas is not faring too well - in selecting which ports to call at.

"While in the long-term cruise operators will desire to return to a larger selection of available destinations, the panel recommends that in the initial stage of return to service that they focus on cruises to their cruise-lined owned and operated destinations (private destinations) or tightly controlled ports if their own private destinations are not a reasonable option," the Healthy Sail report said.

"The panel recognises that it is not sustainable in the long-term to limit sailings to only private or strictly controlled destinations. But as a test case, in the initial phase of sailing, the panel believes there is a significant advantage to starting in these locations."

While The Bahamas will benefit from the recommendation that sailing resume via short voyages, the plan added: "The panel recommends that cruise operators initially prohibit self-guided tours and independent exploration, and only allow certain curated indoor activities until further notice.

"Cruise operators should also leverage their existing agreements with vendors to further implement controls to reduce the likelihood of guests contracting COVID-19 while on shore. The panel recommends that in the start-up phase, guests should only be permitted to disembark at ports if they are taking cruise line-sponsored excursions."

So what few peanuts we get from the cruise industry would now be lost if they only went to private islands. Then their position will be strengthened and that of the Bahamas and the Bahamas government weakened over time. Wonder how that will work out in our favour.

Better idea: Ban cruise ships and focus on smaller numbers of high end hotel based visitors who could be COVID tested on arrival (or departure) and then we have a tourism industry which brings us a lot of money per person and a healthy Bahamas!