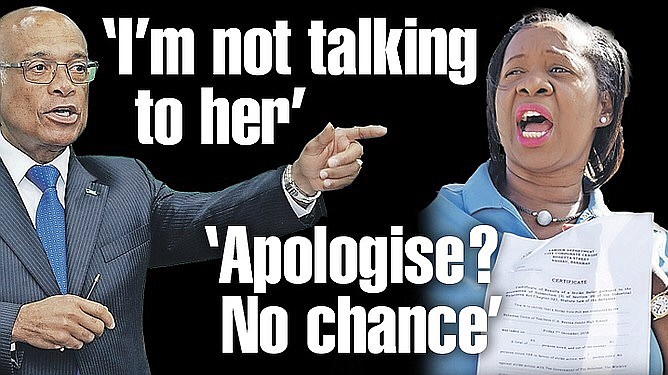 EDUCATION Minister Jeff Lloyd said his ministry will not attend meetings with Bahamas Union of Teachers President Belinda Wilson or view her as a credible representative of teachers unless she apologises for her conduct and stops behaving in a “disrespectful and insulting” manner.

He also claimed she has cursed at him in WhatsApp messages.

Mr Lloyd’s comments were in a letter he sent on September 23 to Elma Garraway, the chairman of the National Advisory Council on Education. He copied the letter to Prime Minister Dr Hubert Minnis, Labour Minister Dion Foulkes and Labour Director John Pinder.

Mr Lloyd said despite his ministry’s best efforts to work with Mrs Wilson, officials have too often been met “with insults, disrespect” and an atmosphere that threatens the quality of education for Bahamian students.

He accused Mrs Wilson of illegally leading teachers to industrial action and he claimed Mrs Wilson twice disrespected Education Director Marcellus Taylor in the presence of his subordinates. After one case, he said, the Permanent Secretary sent Mrs Wilson a letter warning her that “neither the ministry nor department will ‘subject (itself) to any further personal attacks by her’.”

“These acts and others have become most intolerable by the ministry,” he said.

“The behaviour and attitude of the president over the past three years, as the leader of such a vital stakeholder as the teachers’ union, are real threats to the advancement of education in this country. Obviously, this ministry will not accept a continuation of this most disrespectful circumstance.

“You are hereby informed that without a written apology from the president to the ministry’s leadership, the Ministry of Education will not attend any meeting with NACE in which the president is present.

“Further, without a written, irrevocable commitment from the president that her disrespectful and insulting behaviour ceases immediately, and that she will demonstrate an earnest, good faith attempt at achieving the world class education for our children, she will receive no accommodation from this ministry as a credible representative of the teachers of the Ministry of Education.”

In response, Mrs Wilson said Mr Lloyd is grasping at straws and is using his letter as a distraction.

She said Mr Lloyd “can hold his breath” about getting an apology and accused him of being petty and dishonest for “sharing private communication in the public domain.”

“He should use his time wisely by writing policy and monitoring the performance of education officials,” she told The Tribune. “He needs to make sure that schools throughout the Bahamas have reliable internet access, teachers have laptops and not tablets that are incompatible with Zoom platform, make sure schools are cleaned and sanitised and safe for teachers and students to occupy, get the virtual platforms implemented so teachers, students and parents can know how to operate it, properly train teachers for the virtual teaching and learning.”

Meanwhile, Mr Pinder said yesterday, he will have to get involved in the dispute.

“The enormous practice is for there to be some level of courtesy extended on both sides,” the Labour Director said. “Based on what happens now I’m going to have to get involved and I will appeal for calmer heads to prevail. In negotiations you could never get everything you want, but you have to be reasonable.”

Mr Pinder said if he can’t solve the dispute, he will recommend that the ministry and BUT leaders participate in arbitration.

“The decision by the arbitrator must be kept by both sides,” he said. “I will try my best to mediate between the two sides. I will use my experience and I hope at the end of the day they’re able to come to a mutual agreement that both sides can live with.”

I understand that Miss Wilson was never a proper academic teacher, she only did the sports and gym classes. She is now a wannabe plp politician doing whatever she can to get a mention in the newspapers and other media. Well done to the minister for calling her out on her use of disgusting language. Someone who does use such language should not be around our children although she might fit in with an organisation that publicly puts the finger up/

It will be tough but we need Government to stand up to the unions in this country (and not just the Teachers Union). Unions were needed and brought a lot of good, now they cause more problems then they solve.

There are a lot of things needed to bring the public education system up to where it should be. We need people to fight for that. Sometimes discussions can get heated. However, respect should never be thrown out the window. You can have heated debates between professionals that hours later everyone when they're calm can resume and smooth things over and there's no hard feelings.

Mrs. Wilson said that the Minister should not have shared a private conversation in the public domain. Wow! She clearly missed the picture that she was totally out of line. That's a very disgraceful behavior from her side. She's nit stating that it never happened which confirms that it did. This can not be the face of teachers in this country. She has to go. I think that perhaps there could be some issues that she's fighting for that perhaps Mr. Lloyd may not be addressing or not addressing in a timely manner. But, you can't behave like you are a thug on the street. Every teacher in this country needs to vote for a better representative. This is extremely poor behavior.

Someone needs to give her a training in professionalism. One thing you have to say here, it takes a lot of stones to tell the Minister "f--- y'all". When you think we've hit the lowest point we can go, we show there's still room below.

The joke is the BUT banner SOLIDARITY? Utter bullshit,whilst all teachers pay closed shop dues, voting on motions involving expats in particular are usually met with a resounding "no"!. Additionally Belinda whilst spouting causes for the teachers as a whole will not put the same effort in fighting individual cases of victimization by the MOE on teachers.yet look how vigorously she defended herself in court to regain her position. . By any standard the annual accounts leave a lot to be desired especially the so called teachers pension scheme.

Belinda is a certified B! Yeah I said it. Her attitude is very similar to the nasty, jungless you regularly see in the dark corners of bars, spouting nonsense while everyone at the bar avoids eye contact with her, because if you make eye contact then you are next to bat on the tantrum tirade. In other words... she needs an orgasm!!!!!

Mr: Lloyd is no MR; Alfred Sears or Mr: Jerome Fitzgerald . Lloyd and Ms. Wilson deserve each other.

Ms. Wilson time is up, to much people are saying the same of her rude an haughty behavior, either she apologize in writing or the Ministry must do what it said it will do,end of he story!

Be wise if the comrade de-education minister was to refrain going do some door-knocking general election campaign canvassing if he's so quick faint upon hearing some really nasty killer F Y'all,* power-hungry House-elected red coat MPs, and politically appointed senators. kinds insulting phrases expressed fluently in both we colony's two official languages. Shakehead once for Yeah, Twice for Not?.

None of you know Mr Lloyd and his director of education. . .two of the most rudest and obnoxious persons in public services!! The department of education is in one big mess. . .both men are rude and unresponsive . . . the teaching as well as other staff at that ministry is so frustrated with those two!! Good qualified persons are leaving there in frustration and Dr. Minnis seem deaf to the cry of officers about the problems in the administration in that department! Both men are typically know for talking bad to staff in front of others! The biggest offender is mr taylor.

This government seem useless when it comes to that place! If mrs wilson cussed the minister in private that's their business. . .mr Lloyd should have kept their private dialogue private!! As for mrs wilson cussing him outside of the office. . .they are adults. . .duly elected public figures. . .that's their business!! The department of education is acting childish. . .the people hired them to do our work. . .they have to leave their petty feelings them home!!