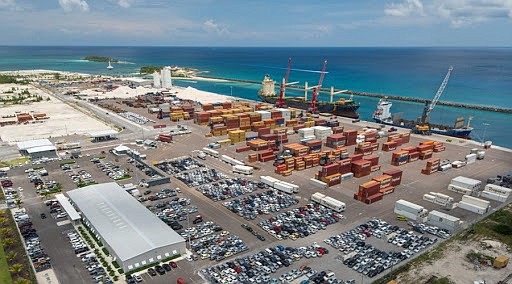 * Bottom line down $3m between March-August

Dion Bethell, Arawak Port Development Company’s (APD) president and chief financial officer, told Tribune Business that while there had been a "slight increase" in import volumes since the full lockdown was eased all categories remained down by more than 20 percent for that period against their 2019 comparatives.

Predicting that such trends will continue until "at least the 2021 first quarter", Mr Bethell said the amount of freight passing through the BISX-listed port operator's docks and storage facilities will only truly recover once the major New Providence resorts start to re-open and tourism numbers begin to approach something like their pre-COVID levels.

With such an outcome still some way off, he added that APD had introduced measures to ensure staff were able "to close the gap" between the hours they are presently working and the normal 40-hour week via accrued vacation and training.

"When we look at our volumes in the period of time between March 2020 to August 2020, versus March 2019 to August 2019, our TEU (twenty-foot equivalent unit containers) are still off by about 21 percent," Mr Bethell revealed to this newspaper. "Our bulk tonnage is off by the same 21 percent, and our vehicle volumes are down by 28 percent.

"Overall revenues are down by 24 percent. Everyone would have had to trim their business sales in light of COVID-19, so our expenses were down for the same period over last year by 12 percent.

"The overall effect on the bottom line, notwithstanding the concessions we came out with in March, where we reduced tariffs by 50 percent, net earnings are down by 65 percent. That is really, for the period, down by almost exactly $3m."

APD's performance is a reasonable barometer with which to measure the level of economic activity on New Providence and the wider Bahamas, given that upwards of 90 percent of physical goods imports to the former must cross its wharves as the island's only commercial shipping port.

While cargo volumes have recovered somewhat from the 40 percent drop-off seen in May 2020 during the COVID-19 lockdown's peak, Mr Bethell reiterated that a complete rebound remains months' away and will not be seen until the major resorts re-open and enjoy pre-COVID occupancy levels again.

"We have had some upturn, as we were down by more than that going through the end of May," the APD chief said of present TEU and other volumes. "It has improved, but not significantly to replace the tourism volumes involved with supplying Atlantis, Baha Mar, Sandals etc.... I could see this happening at least until the 2021 first quarter.

"We've seen a decline in the amount of vessels calling, and the utilisation of vessels coming in, whether it's one of the big shipping companies coming in like Tropical Shipping and Mediterranean Shipping Company (MSC). The utilisation is very low compared to the size of the cargo vessels. Betty K and even MSC, in recent times, are not consistently having the vessel calls they were having pre-COVID."

Joining those arguing that The Bahamas has no alternative to tourism in the short-term, Mr Bethell continued: "While we can appreciate the impact that the cruise ships have on our local economy, suppliers such as Bahamas Food Services don't cater to them as much as the hotels.

"Until the hotels commit to opening up, suppliers like Bahamas Food Services (BFS) and members of the Bahamas Wholesalers Association will perhaps not commit to volumes that supply those resorts until they know with certainty.

"Until there is a definite date I don't think they will commit to pre-COVID buying patterns that supply the hotels." Recent COVID-related closures, and restrictions on opening times and formats, have also reduced import-related demand linked to the restaurant industry, although Mr Bethell said there had been "no shortage" of supplies for food stores throughout the pandemic.

He explained that uncertainty over the economy's re-opening, and whether the Prime Minister will shut it down again through a tightening of restrictions, had also dampened import demand by hardware stores and other retailers as most had elected to manage existing inventories rather than tie cash flow up in stock that cannot be moved.

"We saw a slight increase in recent times after inventory had gone down to lower levels with building supplies," the APD chief executive added. "While construction is ongoing a lot of it is bulk materials -0 concrete, cement, sand and steel. We saw quite a bit of steel coming in, but not to the point that it replaced pre-COVID-19 volumes that existed.

"I think a lot of the hardware stores, with the uncertainty of opening up over a period and then locking down, were trying to manage existing inventories rather than consistently replace them. Until they have more certainty in terms of opening up, I don't think they will be able to commit to their suppliers having orders placed to keep them stocked at pre-COVID levels.

Mr Bethell said APD had yet to suffer any positive COVID-19 cases among its immediate 100-strong staff "knock on wood", but the need to split departments into teams as part of health and safety protocols - as well as reduced ship calls and import volumes - had cut working hours for some.

"We have taken measures to close the gap between the hours they may work and the standard 40-hour work week," he added. "We remain committed, if they fall short of the 20-hour mark, to bring it up to 20 and augment with accrued vacation and training.

"That strategy will be coming into play very soon. We've not separated with or terminated anyone. We've done our best to keep them employed even if it's on a reduced schedule."

Lucky for them they can raise prices to whatever is necessary to guarantee a minimum of 10% profit. If we all were not so lucky.

Its a monopoly. Who cares? Sheesh...

They can tax the poor in order to earn their 10% profit. Thanks to the FNM Papa