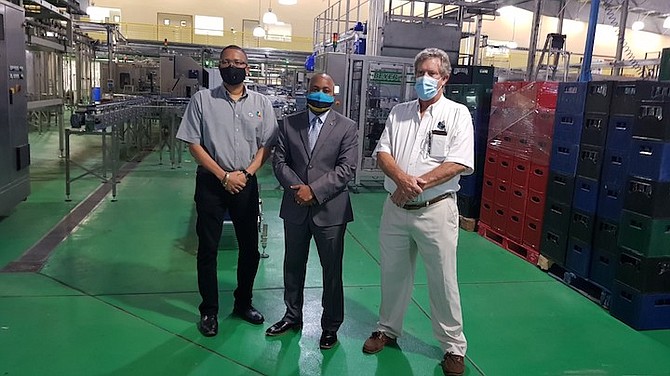 Senator Kwasi Thompson (centre) stands in the newly renovated and expanded warehouse at Bahamian Brewery, during a tour of the facility on Friday. Standing with Mr Thompson is James Sands, president of Bahamian Brewery (right) and Ian Rolle, president of the Grand Bahama Port Authority. (BIS Photo/Andrew Coakley)

MINISTER of State for Grand Bahama Senator Kwasi Thompson says the reopening of the Bahamian Brewery Company’s production facility is an example of what it means to go through hard and difficult times and come back out bigger and better.

His comments came during a private tour of Bahamian Brewery on Friday morning, where president of the company James Sands took Mr Thompson, along with Ian Rolle, president of the Grand Bahama Port Authority, on a tour of the renovation of the facility, which is expected to restart the production of their line of products on Monday.

“We want to congratulate the Sands family, because they have done an excellent job in rebuilding this business,” said Mr Thompson. “This really is an example of a Bahamian-owned business, with roots in Grand Bahama, having gone through Hurricane Dorian and having gone through the Covid-19 pandemic lockdowns and coming back successfully.

“It sends a very positive message to the entire island that one can go through difficult times, but you can also come back and come back better. Not only has this place been rebuilt, but it has been expanded.”

Mr Thompson noted that one of the commendable things Mr. Sands and the company did following the destruction of the business by Hurricane Dorian, was to keep all of the staff members employed.

At present, some 85 percent of the employees are back on the job, with the others furloughed. However, as the production line kicks into gear on Monday, more members of staff are expected to be re-employed.

“That says a lot about this company and about the people who own Bahamian Brewery,” said Mr Thompson.

“Keeping all of the employees on during the time the company was shut down was important for the employment numbers on Grand Bahama. That was a huge investment and it is noteworthy. It really is just a good message. It sends the right message to Grand Bahama and to the rest of the country that businesses can go through a storm like Dorian and still come back.”

Bahamian Brewery was adversely affected by Hurricane Dorian that struck Grand Bahama with Category Five winds in September 2019, destroying much of the building and flooding the production building with over five feet of salt water. It took some months for the employees to clean up the facility and have the building repaired.

With an added investment for repairs and renovation, Bahamian Brewery in Freeport, Grand Bahama, is now a bigger facility, with the capability of increasing its production.

Mr Thompson called the success story and the reopening of the company’s production facility “another good day in Grand Bahama.”

Can't help but think how much better off all Grand Bahamians would be if someone like James Sands was Mininster of State for Grand Bahama rather the totally useless Kwasi Thompson.

Kudos to Mr.Sands.... what a national spirit and what an example as an employer everyone should switch to SANDS! In all that adversity he came thru covid included !!!!! Tough just like his dad, Everitt.

Congratulations Jimmy! You and your hard working family make us proud! This is huge.