Dollarisation Must 'Be On The Table'

• But Gov't 'not pursuing currency switch at this time'

• DPM: B$ liability conversions 'not a simple switch'

An ex-attorney general says full dollarisation of the Bahamian economy must "be on the table" as the country faces "a tipping point" due to the devastation inflicted by the COVID-19 pandemic. 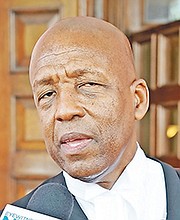 Alfred Sears, who held the post during the 2002-2007 Christie administration, told Tribune Business that the unique challenges that The Bahamas now faces merited a "closer look" at the concept of replacing the Bahamian dollar with its US counterpart.

"We are already moving to dollarisation, but we need to look at that even more closely," Mr Sears said, "especially as we move to a national debt of $9.5bn. It has to be on the table. We have to think in terms of stability. COVID-19 has taken all the normal matters of macro financing off the table.

"The Bahamas has never been in a position where the national debt is almost equal to GDP, where revenues are insufficient to meet the Government's necessary obligations, and where we have to borrow in order to pay civil service salaries.

"This is a new frontier for The Bahamas. The normal that we knew is not coming back. The world we knew in March 2020, where we were looking at seven million tourists coming, primarily off cruise ships, that world is not coming within two years or probably even more," he continued.

"We have to pivot now. We cannot wait to pivot two years from now. There will be no external reserves left. This is a fantastic opportunity for The Bahamas, but we need the imagination and we need the courage to create a new platform for the national economy."

While the US dollar currently operates in parallel to its Bahamian counterpart, full dollarisation as advocated by Mr Sears would see it totally replace the latter as the only currency in use in this nation.

Such a move has been previously discussed at various intervals by economists and others, but The Bahamas has so far shown little sign of making such a move. To-date, only Panama and several US satellite territories have opted for full dollarisation, with such a substitution often used as a means of achieving economic stability when a domestic currency loses value to hyperinflation and other problems.

But Mr Sears said: "I see it as a definite option. I'm a nationalist, but I think we have to begin to redefine the macro economy of The Bahamas and we have to certainly recalibrate the relationship with the US. This process is going to require us to do some recalibration that ought to have been done many years ago...

One financial industry source, speaking on condition of anonymity, said giving up the Bahamian dollar would effectively cede control of Bahamian monetary policy to the US Federal Reserve and its setting of interest rates.

They added, though, that The Bahamas currently enjoys little monetary policy flexibility anyway because this is geared solely towards the balance of payments, and preserving the one:one peg with the US dollar via always ensuring the foreign currency reserves are maintained at sufficient levels.

Suggesting that dollarisation would effectively remove the hook, or strait-jacket, on which Bahamian monetary policy is hung kept, the source called for more debate on the issue and added: "I've always argued we should be dollarised and move to that as soon as we can."

However, K Peter Turnquest, deputy prime minister and minister of finance, yesterday told Tribune Business that dollarisation is not something the Government plans to pursue. He added that it was "not as simple" as many think, given that The Bahamas would need sufficient external reserves first before it could convert all its Bahamian dollar deposit liabilities into US currency.

Central Bank data for August showed $8.157bn in demand deposits and notes in circulation versus $2.127bn in external reserves, highlighting this problem. "It's something we all keep in the back of our minds," Mr Turnquest said of dollarisation "but it is not something we are pursuing at this time.

"Everyone thinks stopping using Bahamian dollars is an overnight switch, but it's not as simple as that. All the assets and liabilities have to be converted. It's a huge challenge, coupled with the risk of devaluation in the process. It's not something you can make an arbitrary or rushed decision on."

"Central Bank data for August showed $8.157bn in demand deposits and notes in circulation versus $2.127bn in external reserves"

In reality if The Bahamas wanted to dollarise the economy there would first need to be a major devaluation of the B$. So this is clearly not an attractive option.

Question. Let's say I have one million B$ in my bank account. If we adopt the US$ as national currency, where is the US$ one million going to come from to replace my one million B$?

US $ may be in more trouble than the Bahamian $ so if the country goes strictly to US currency it may be planning its even sooner fall off the fiscal cliff.

Good point. Why I think we should link to BitCoin.

That's what K Peter Turnquest is saying. But who has $1 Million BSD anyway, probably less than 0.1% of Bahamians.

better to back our money with gold and silver but broke so can't buy any.

Perhaps we could extinguish our national debt by selling Crown Land in Abaco and Grand Bahama to the USA or Taiwan for sale proceeds denominated in US dollars. This might also help prevent us from becoming enslaved to the Communist Chinese Party at some point down the road. LOL

If ya like it so much, go live it Rodentos. The grass, just like the almighty us dollar, printed on political demand, is always greener on the other side.

The former AG is spot on, still, Comrade King's Counsel Alfred is a year behind my projected 2021 date for a full move to dollarisation.
No surprise all this is turning lots we POAL, into a boozing colony. Just couldn't make this stuff up. Just couldn't.
Shakehead once for an acknowledgment Yeah, I is Proud Sands Beer boozer, Twice as a colonial Kilik?

This has the benefit that as BitCoin rises over time so too does the value of a BitCoin Bahamas Dollar.

And it gives us something unique to market to international investors.

Are you for real? You sound like that crooked thug Sebas Bastian.

what does it have to do with being a Thug? No bigger thug currency than USD which funds Wars around the world.

that's too advanced for them.

switching to any other currency including experimental crypto will not help you if 1) you have no business model (tourism gone, banking gone, money laundering gone) and 2) you have no spending discipline whatsover

As is the norm for Sears, he has absolutely no clue what he's talking about. The B$ is and always has been Monopoly money backed by US tourism. A full conversion to the USD would require the politicians to do something they have been unwilling to do up to this point - practise fiscal responsibility.

Might as well go under the US one time.

Too late....the US is not inclined help us in a big way now.....and certainly will not be inclined to do so until we give the Communist Chinese Party the boot from our country and re-establish diplomatic ties with Taiwan as the R.O.C.