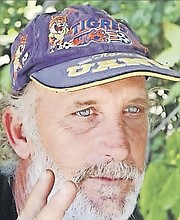 LIGHTNING struck Timothy Sweeting in the “twinkling of an eye” last week Monday and changed his family forever.

The 55-year-old was pronounced dead at Princess Margaret Hospital on Thursday, several days after he was airlifted from Harbour Island.

His death brought an abrupt end to the 25-year marriage he had with Adrianna Sweeting, the 54-year-old mother who rescued his body from the water and is now struggling to cope with his death.

“Everything happened so fast,” she recalled yesterday. “I haven’t faced reality yet.”

In anticipation of inclement weather, Mr Sweeting and his wife left home early to secure his boat at the dock.

“It was only raining at that point and knowing him, if he knew the lightning was coming he wouldn’t go into the water,” Mrs Sweeting said.

“He’s been a fisherman all his life and he knows about those kinds of things. This happened in the twinkling of an eye.”

Mrs Sweeting said while her husband attended to his boat, she sat in a golf cart as the sky became cloudier and the weather deteriorated.

“I was shocked. After it did that I took my mind from him and was looking at the umbrella. I thought he was safe in the boat. It was only after I didn’t see him for a while I called his name twice but he didn’t answer so I went to the edge to see what was happening. If I knew it had hit him I would’ve gotten off quicker.

“I went over and saw him floating in the water, his eyes were open, he was moving his hands trying to call me but nothing was coming out of his mouth. I went into the water and pulled him to shore. One policeman and some other people heard me hollering and they came and took him to the clinic. I had to go home and call his sons and when I got to the clinic he was still laying on the pavement outside with foam coming out of his mouth. We were waiting for the doctor.”

“We really need a respirator, or whatever that machine name is, on Harbour Island. The nurses were using a blue balloon pumping air to his lungs,” she said.

“The doctor told me he was already dead. He was unresponsive from the time we took him out of the water until I brought him to Nassau. He never regained consciousness. He was brain dead, he didn’t have any function in the brain but his heart was still strong. They were only waiting. There was nothing they could do anymore. They say they couldn’t pull the respirator until all the organs in his body were dead. He was pronounced dead Thursday evening.”

Mrs Sweeting said the lightning also destroyed the motor of her husband’s boat and has left her jittery.

“I’m trying to hold up,” she said. “The kids are distraught. If it rains or something right now I get afraid and come inside. We were married for 25 years. We had three children and two step-children. He was a good fisherman from (the time) he was 14, he loved the sea. He was a loving husband, a caring father and everyone loved him in the neighbourhood.”

How tragic. Our lives can be turned upside down with a passing thunderstorm. Take comfort in the life you had together Mrs. Sweeting, and see him in the faces of your children. My deepest sympathies.

Very sad indeed. Who remembers the five lightning deaths occurring about August 21, 1991? Two in North Eleuthera, one in Cooper's Town, Abaco, one at the private aircraft parking area of the airport in Nassau and I believe one more but I can't recall the details. I have had a few close calls myself and I can assure you that you can't predict how lightning will behave.

Truly sad, but I don't know if any medical equipment can undo an electrocution!

Condolences. This is serious. 2 young chaps got electrocuted by lightning in Jamaica 2 weeks ago. Just like that.