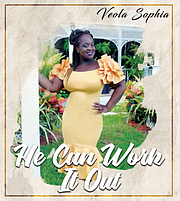 OUT of her own personal testimony of seeing God show up time and time again was born Veola Stewart’s newest single - which she believes will bring hope to those who hear it.

“He Can Work It Out" is an elegant new track, produced by BBO and recorded at Studio 7. The single marks her seventh single release, and it follows on the heels of writing and ministering during a pandemic.

“He Can Work It Out was written a few years back but was revised during COVID-19 as I saw how persons were affected by this deadly disease. This song was written about my testimony about the journey that I have experienced with my son. I have two children with sickle cell disease and the journey has not been easy for my son being only five years old and to have been hospitalised six times. My baby has been so blessed to not have any challenges and we thank God. When my son was only two months old, he was diagnosed with sickle cell disease. The doctor had noticed that he was not doing well or developing properly. He was later diagnosed with autism. Not only being challenged with physical issues that threaten his life, but he was also faced with development issues. We needed The Lord to work our situation out,” she said.

Through the single she wants to encourage listeners during this worldwide crisis to know that God can work all things out.

“I believe that 'He Can Work It Out' can build hope in the hearts of people during this time. So many persons are hurting, don't know where the next meal or dollar is coming from. Some persons may be in abusive situations. Some persons have illnesses and may be infected with the COVID-19. I want to encourage my listeners to know that God Can Work things out. We have to believe God for that healing. We must have faith and must take a stand and move forward,” she said.

As a gospel musician Veola believes it is her duty to create music that is filled with joy and encouragement.

"I want my listeners to have faith in God to trust Him enough with their life and heart. Deuteronomy 31:6 says 'Be strong and courageous. Do not be afraid or terrified because of them, for the Lord your God goes with you; he will never leave you nor forsake you'. Philippians 4:19 says and my God shall supply all your needs according to His riches in glory by Christ Jesus.

In recent times Veola has been venturing into new musical pursuits and continuously building her portfolio.

Veola joined a music challenge which allowed her to enrolled in Kingdom Music Academy and Total Voice University. Both international organisations bring together persons from all nations who are music creatives to develop their gifts for The Lord. From the connections, Veola collaborated with people on writingrounds.com to co-write music.

“That was a very interesting experience. Now I am able to connect with persons from around the world to write music virtually. That is so amazing. I learned so much and I love the music community,” she told Tribune Religion.

“I want to continue to write and co-write inspirational music, collaborate with various artists, travel to minister and learn. Most of all I just want to but used by God. I am open to his plans for my life. 'For I know the plans I have for you, declares the Lord, plans to prosper you and not to harm you, plans to give you hope and a future'. ( Jeremiah 29:11),” she said.