ALICIA WALLACE: A mother and daughter die but are we really shocked in a society complicit in violence against women? 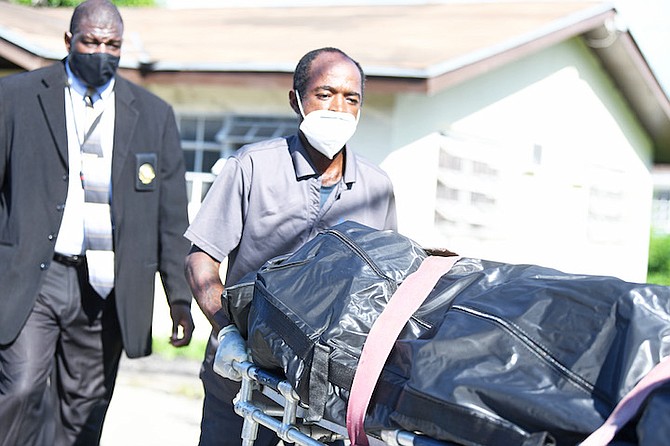 THE SCENE of a double homicide in Nassau Village on Monday, with a mother and daughter confirmed dead. Photo: Shawn Hanna/Tribune Staff

FOLLOWING the murder of a 30-year-old mother and her eight-year-old daughter on Monday morning, the conversation about domestic violence has started again. There is shock, sadness and frustration. We have questions that have been asked before and never seem to get answers. How are guns getting into the country? Why do so many disagreements end in violent death? Who could kill a child? Then there is the question far too many people ask: Well, what did she do for him to kill her?

When domestic violence ends in murder, the general public makes assumptions about the people involved. Narratives are quickly woven, usually based on misogyny rather than truth.

A woman was murdered by a man with whom she lived or had an intimate relationship and people want to know what she did. The fact that so many people are desperate to rationalise murder is an indication of the distance left to go in tackling misogyny and patriarchal views that plague society and are directly connected to domestic violence and intimate partner violence—inexcusable crimes.

These three systems of oppression are linked. Let’s break it down.

Misogyny, simply stated, is the hatred of women. It is a prejudice or mistrust of women and it manifests in many ways. Violence against women, sex-based discrimination and sexual objectification are included. Contrary to popular belief, it is possible to be misogynistic and be in relationships with women. Misogyny does not have to prevent people from prioritizing their own desire. It is possible to have sex with women, enjoy proximity to women in public spaces and use women for personal gain while having a general disregard for women.

Objectification can masquerade as reverence or honour because of its proximity to appreciation. Many people appreciate women’s bodies, but disregard our humanity.

Misogyny does not just live within individuals. It permeates society. It is written into law. It is misogyny that says a man who rapes his wife is free from the hand of the law because a woman who marries loses her personhood and right to autonomy, becoming the property of her husband.

Misogyny was at the root of the argument in 2016 that women should have the right to confer citizenship on their non-Bahamian spouses because they are somehow less capable of making sound decisions and more likely to be duped than men.

People joke, at the same time, about men who “get lost in the sauce” of sex and beauty, yet they can marry and confer citizenship. Misogyny convinces those it afflicts that, even when women and men face a common and have similar responses, men should be afforded the right and freedom to make choices for themselves while women’s rights and freedom are restricted. It is often said this is to protect women and that leads us to the second term: patriarchy.

Patriarchy is a system in which men hold power and women are subjugated. These conditions exist under the guise of protection for women which is rooted in the belief that women are inferior to men.

Patriarchy is in our everyday lives. It is a man requesting permission from another man to marry his daughter. It is a man giving his daughter away to another man. Patriarchy says women must be controlled by men. Ownership and power transfers from the father to the husband. For unmarried women, when the father is no longer able to parent, her eldest brother or an uncle is expected to take on the role.

When a woman requests tubal ligation, some doctors still ask for the permission of her husband. If the patient is unmarried, some refuse to do the procedure in the interest of some future husband. Patriarchy extends to political leadership and control of property and other assets. It seeks to force women to get the permission of a man, privilege his interests and desires above her own, rather than enjoying the right to make our own decisions.

Misogyny and patriarchy work together to create a society in which people believe men are to dominate and control women. Women are expected to defer to their fathers on intimate partners. In fact, women are expected to always have a parent—someone who not only makes decisions and asserts power, but disciplines.

Just six years ago, high school students indicated, through their responses in a study, that patriarchy and misogyny have a central position in relationships and the way we imagine and construct them. If we expect women to have sex, against their own will, with their husbands, we are privileging the desires of men over the autonomy and self-determination of women. People who think this way believe women are to be of service to men and do not understand intimate partner relationships to be between people who freely agree to engage each other in ways that are mutually beneficial and enjoyable.

People who believe men should “discipline” women in relationships with them view men as authority figures and women as subject to the whims of men. Patriarchy and misogyny at work here, defining intimate partner relationships as limiting to women and tools of power for men. Is it then surprising, especially considering the lack of prevention programmes and intervention, that domestic violence is a pressing issue in this country?

In last week’s column, I wrote about the importance of parents talking to their children about dating and relationships. In many cases, parents are not well-suited to that duty because they are in unhealthy relationships and have not yet freed themselves from the grasp of misogyny and patriarchy.

Who could forget Leslie Miller, then MP for Tall Pines making a non-joke about abusing a former girlfriend? Less than three years ago MP for MICAL Miriam Emannuel said there was nothing wrong with being “manhandled”. She said her father told her he would want to know what she did that “caused [her] husband to probably shake [her], slap [her] or punch [her] in [her] mouth” if she told him of abuse. It was outrageous and, sadly, indicative of the way many people think.

There can be no reason for assault. There can be no reason for murder. What someone did or did not do may be used as an excuse, but these acts of violence are the result of the inflated sense of self, presumption of authority and refusal to recognise women as a whole people with the right to freely make decisions, and these delusions are fuelled by misogyny and patriarchal.

We all have work to do. We need to understand that we do not own other people. We can choose to make commitments to each other. We can decide what our relationships look and feel like. We can talk about what is working and what is not working. We can engage a third party to help us work through any issues or determine whether or not it is best to end the relationship.

We are not all the same, we do not have all of the same desires and our relationship needs vary greatly. Some of us need to do a lot of work on ourselves before we complicate the lives of other people. Communication and conflict resolution are no small part of that work.

Domestic violence is a serious, pervasive issue and it is not being appropriately addressed. Prevention is everyone’s responsibility. From modelling healthy relationships in the home to encouraging people to communicate their thoughts and feelings in clear, non-violent ways, parents, teachers, employers, and religious leaders have important roles to play.

We all know someone who has experienced domestic violence or intimate partner violence, and intervention is important. It includes showing people the warning signs, naming harmful behaviour and demanding that it stop and calling for help.

One of the most important things for us to do is call on the government to take this issue seriously. The statistics have, for years, shown we have a serious domestic violence problem. We need a national campaign targeting different groups of people, a separate Domestic Violence Unit within the police department, health services and social service. We need more shelter and temporary housing and they need to be available for longer periods of time. We need better access to justice. We need conflict resolution, non-violent crisis intervention, and healthy relationships to be a part of the school curriculum.

It is not enough to be outraged when we hear about a domestic violence-related murder. We need to do the personal, familial, political and social work to offer the protection patriarchy has always failed to deliver and misogyny says we don’t deserve.

Patriarchy and misogyny lead people to ask: “Well what did she do for him to kill her?” That question reveals a lot about the people asking and those who do not challenge them. What have we done and what have we left undone? This must not continue.

We, individually and collectively, have to save the lives of women and children who are, every day, at risk of being “disciplined” to death.

Alicia Wallace: A Mother And Daughter Die But Are We Really Shocked

In A Society that 's Complicit In ALLOWING Violence Against Women?

fixed your headlines for you

This story is a weird one...The question "What did she do to cause him to kill her?" is, in my opinion, a very broad question to ask...maybe the people that ask that question are asking that instead of "What happened prior to the murder?". Another way that question could be phrased is- "What went wrong with him, why he killed her?"-had this been a situation where he wasn't known to the police for prior crimes of similar nature. Meanwhile in other countries there are wars being waged where no one is safe even in their own homes. The Bahamas is suffering from a SERIOUS social identity crisis that is going to continue to worsen if not confronted by us. My questions are, "When did we fall so far morally?" and "Where is the line drawn to separate moral and immoral in an ever worsening social condition?"