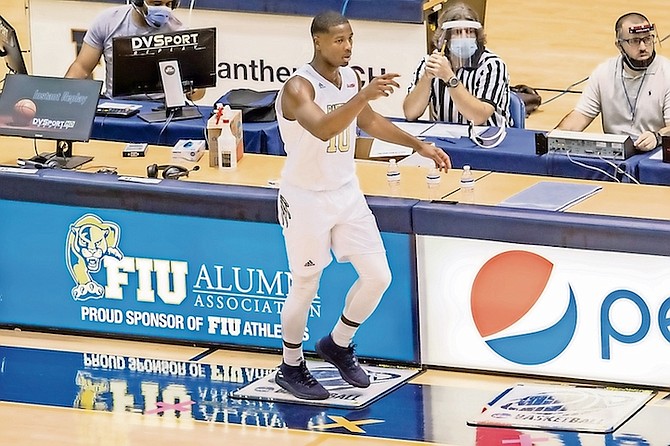 RADSHAD Davis has chosen to forego his final year of NCAA eligibility and pursue pro basketball.

RADSHAD Davis chose to forego his option of a final year of his NCAA and will pursue professional basketball.

Davis, who recently completed his lone season with the FIU Panthers, made the official announcement via social media.

“I can confidently say that this chapter of my life has come to a close. And so, I will now be pursuing my dreams of playing professional basketball.

“I’ve always envisioned myself playing at a higher level after all of my hard work and dedication. I think now is the time for me to make that transition,” he said. “I extend a heartfelt thank you to my family and mentors, past and previous coaches, and everyone that always believed in me and takes their time to pour into me.”

Davis appeared in 16 games and averaged 13.1 points, 6.4 rebounds and 1.6 steals per game. He shot 48 percent from the field, 34 percent from three-point range and 83 percent from the free throw line. He posted three double doubles on the year. He scored a career high 28 points against Flagler in just the second game of the season and posted 10 rebounds on three different occasions.

“As I reflect on my journey with the Panthers, I reflect on all of the priceless memories that we’ve created, and all of the times we went out and trusted each other enough to play at an elite level of basketball,” Davis said.

“During my tenure at FIU, all my coaches did an excellent job of helping to mold me into the player that I am today. And now, I can undoubtedly say that I am a better player and individual because of this. It was a pleasure to be a part of such an outstanding organisation and I am forever grateful for the opportunity.”

His final collegiate season came to an abrupt end in the Conference USA tournament after the Panthers were eliminated without playing a single game.

The East Division Preliminary Round game featuring the No.7 Panthers and No. 6 Middle Tennessee was cancelled due to COVID-19 protocols and contact tracing in the FIU programme.

The 6’5” wing transferred to FIU after spending two seasons with the Texas-Arlington Mavericks.

He concluded his final season with the Mavericks with averages of 8.6 points and 6.2 rebounds per game on the season.

As a junior, he averaged 8.0 points and 5.5 rebounds per game. He finished second on the team in field-goal percentage at 51 percent and shot 78 percent from the free-throw line.

Prior to UTA, he played at the JuCo level with the Missouri State University-West Plains Grizzlies.

As a sophomore, he averaged 16.5 points, 6.7 rebounds, 3.4 assists and 1.3 steals per game against all opponents. He finished second in the region in both scoring and rebounding.