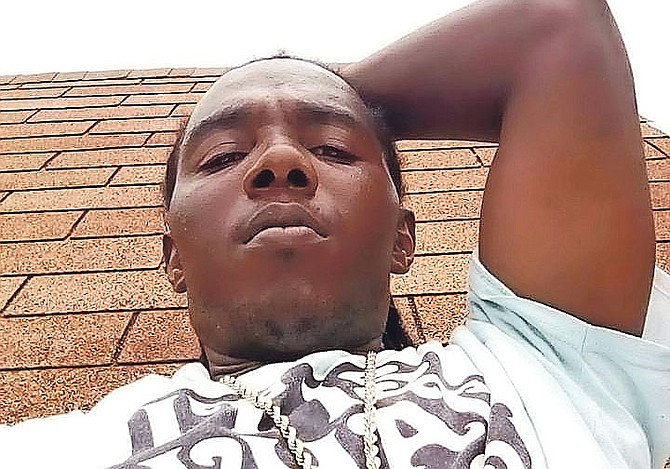 PATRICK BOWE, who was shot dead by police on Friday.

POLICE shot and killed a man on Good Friday who they said fired a gun in their direction.

The suspect had recently been released on bail for the murders of two people, one of whom was his child’s mother.

According to initial reports from police, around 1pm on April 2, officers from the Operations Unit pursued two male suspects on foot in the Nassau Village area. They said during the chase, one of the suspects produced a firearm and discharged it at them, so they returned fire which in turn injured the man. A black pistol was recovered, police said, and the injured suspect was taken to the hospital by Emergency Medical Services where he later died.

While police have not released the identity of the victim, family members say he is 36-year-old Patrick Bowe.

Yesterday, his sister said Bowe was walking to his aunt’s house with his cousin, when he was pursued by officers. She has also questioned the Royal Bahamas Police Force’s version of the events and believes her brother was being “targetted” by police.

She said Bowe had just been released on bail after he was charged with the murders of James Johnson and Kevisha Kerika Richards in December 2018.

The Tribune understands that Bowe was the father of Ms Richards’ child. His sister, who asked not to be named, said while he had run-ins with the law, he was not convicted of the killings and she does not think he deserved to die.

“Honestly and truly, everybody has their ups and their downs and like I was telling people, my brother was accused but he was never convicted of the double homicide in 2018,” she told this newspaper.

“He was never convicted, and he had just gotten released (on bail). (He) loved his kids, if he didn’t love nothing else, he loved them. That’s one of the first men who still would communicate with his kids whether him and the kids’ mothers were together, because of the love that he had for them.”

The grieving relative said in addition to being a dedicated father, Bowe was a “very good person”. She added that his family is currently “distraught” and struggling to come to terms with his death.

She also disputed some of the police’s reports of the incident.

“That morning him and my cousin was together, and the police indicated that they went after two suspects, but that’s not no true. They only went after my brother; they did not go after my cousin,” she claimed.

“My brother and my cousin was going to my aunt the same time when they saw the patrol car and he know whenever the police around they normally would bother him, so he would try to just go behind gates to be away from them. They never bothered my cousin. My cousin is home now and they never came back (for him), he was never arrested or anything. How is it if you were in pursuit of two suspects, you shoot one? You didn’t even call the ambulance. My family members were the ones that call the ambulance to come and deal with my brother,” she claimed.

She said when she tried to call back, she was unable to get through; however, her aunt returned her call a few minutes later and told her to “come to the Village”.

“When it is a shooting incident, the police never allow any civilians to go next to the victim, but I was able to go next to my brother with my aunt. My brother asked me to put his leg on me and I (sat) on the ground. He told me ‘Lift it up, my leg’s hurting, it getting cold’ and that’s what I did. He was on us and he was talking to us. When he left in the ambulance he was talking.”

Bowe’s sister said the ambulance took about 20 minutes to arrive at the scene. She claimed when they took her brother, they never carried him “straight out of Nassau Village,” but instead drove “a couple corners down and turned off their sirens” before leaving the area.

“We ain’t holding up at all,” she continued. “I haven’t slept, my sister hasn’t slept— it’s a serious blow.”

She said the family is dealing with compounded tragedy due to the earlier loss of another brother and her mother’s death several years ago.

“You know what it is for your mother to die, then your two brothers to get killed? It’s like you keep getting juck in that one spot repeatedly three times within the space of three years.”

The woman said although reports on social media were alleging that her brother got what he deserved, she noted that he was never convicted of any of the offences for which he was charged.

“I tell people ‘Okay my brother use to trap (sell drugs),’ but when it comes down to murdering and killing people, no,” she stated.

“Before that young lady get kill, numerous times my brother would call me and tell me ‘Hey, come carry this money to her’ and numerous times I did it myself. Sometimes I even had his phone (and) I saw numerous conversations in his phone with them two messaging each other. People keep saying ‘Oh he’s a murderer, he’s this and he’s that’ but to me, that isn’t my brother. I wasn’t there to say if he did it or didn’t do it, but when you know a person, you know a person.”

Not too sad of a story to be honest!

I need a tissue.

We have a legal (or government authorized and sanctioned) killing squad in this country. One that is taking law into its own hands. It is undermining the law in this country and overriding and overruling the court system. Police have been given the legal power (de facto) to kill without question or accountability. The danger of this activity is the number of persons Marvin Dames, Commissioner Rolle and their killing squad deem necessary to ‘put down,’ is increasing. And the Bahamian people must exercise their rights to make these police account. Marvin Dames must NOT be re-elected to office and Rolle must be fired.

So police should not return fire when shot at by criminals?

Police claim they were shot. Eyewitnesses say the victim was first shot in his back as he was running away, then shot several more times about the body as he lay o wounded on the ground. That is why there needs to be proper enquired and investigation in these police killings, especially since the body and dash cam footage is only for police benefit. If these police killings are allowed to continue unchecked, how long before they start entering your homes and killing everything that moves. I, my bad, they already did that several times. And even chained or caged dogs are unsafe. Take the police’s knee out the people’s necks.

PS: when persons who were released from jail were gunned down and killed with days and sometimes hours of being released, the public always suspected the police were involved. This incident tends to confirm those suspicions.

This guy sounds like a real prize. Sorry that he ever found women stupid enough to breed with him!

It’s not very hard. Women in this country open their legs for anyone and anything.

Your satanic racist remarks have been noted. And the day will come when you too will be judged for your inequities. Imagine your daughters and great grand daughters going through what you and your dirty forefathers put the Black women through. For eternity dude! Forever! God’s judgment comes after the rule of Satan. Yes Satan rule will last forever 600 years but God’s judgment will last forever!and Marvin Dames and Paul Rolle too will be judged for what they are doing to their own people. Then have the nerve to stand in God’s pulpit. Judgment begins at the pulpit though.

Blah blah blah..... All I smell is shit when you open your mouth.

The truth will have that kind of effect on those who hate it. Go in peace! Your true colors are showing! And they include oppressive blue and dirty red along with cowardly yellow!

Babylon is falling! God will cast off the yoke of the oppressor and those who follow him.

I guess my initial comment was to real for the tribune to post....long story short: JUSTICE HAS BEEN SERVED!