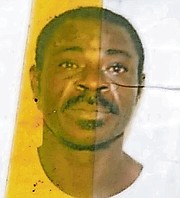 THE FAMILY of a man who was shot and killed while he was playing dominoes over the holiday weekend said although he had his challenges, nothing he had done could have justified the way he was killed.

Dereck Rolle said his brother, Anthony Tyrone Rolle, 51, was at their usual family hangout spot on Sunday, when he was approached by a man he knew who shot him in his stomach.

“I heard the boy approach him but everyone thought he was a regular person with a mask and hat on,” he said. “When he reach so close, my brother said ‘Man do something for me man’ like they know one another, but the boy said ‘Yea I come to do something for you now’ before shooting him.”

Police said shortly after noon they were called to the shooting on Nassau Street. When they arrived at the scene, they found a man suffering from gunshot wounds to the abdomen. Officers said the victim said he was playing dominoes when he was approached by a man he knew who produced a firearm and shot him. He was taken to the hospital where he later died of his injuries. 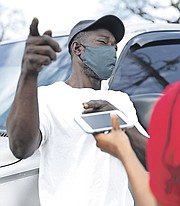 Yesterday, Mr Rolle told The Tribune his older brother was a landscaper who also washed cars for a living. He said while Anthony “had his issues”, he was still a “good person” and did not deserve to die the way he did.

“I loved my brother with all my heart,” he said. “He’d go out of his way to do just about anything for anybody in spite of it all. He had his own differences just like everybody else, but he was never a violent person. He was never in a gang (and) he never had no problem with no one.”

Mr Rolle said he was attending a church service with his fiancée at the time of the incident, but his brother and a few of their family members were playing dominoes at his stall where he sells fruit on Nassau Street. He said when he had heard Anthony had been shot on Easter Sunday, he was shocked.

“The issues with him and this person who attacked him yesterday was probably going on for quite some time, but he ain’t never bring it to our attention (until) a couple days prior to the incident,” he said.

“He said about two or three weeks back, the fella came out there and try snatch him. This same fella try yuck him in a car before. But I don’t know what type of problem him and this fella had to cause this fella to come and go out of his way to come on the main road and walk up by my business place to kill my brother like that for no reason.”

Mr Rolle insisted although Anthony had his “own issues” he did not bother anyone. He also said his brother never dealt with his problems in a “violent or fighting” manner, because he was humble.

“My brother wasn’t a stupid fella, he was very wise and everyone knew him, so it had to be something personal between him and the fella who came and kill him. I don’t know what it was, but it couldn’t have add up quite to say ‘Come kill me.’

“When I saw him yesterday (Sunday), he was all right,” he added. “He was trying to talk, but I told him don’t talk much because I saw the spot where he got shot in his abdomen when they raised his shirt up.”

When asked whether the family was apprehensive of resuming their domino games at their traditional hangout spot in view of his brother’s death, he stated: “We play dominoes every day. That’s not a target place, that’s a place where all my brothers and family is just chill out. That’s where my business is and this my area. We don’t get nowhere to run or go because we ain’t fighting with no one on this 21 by 7 (island). We’re letting the matter rest with the police.”

The shooting marked the 31st homicide for the year, according to this newspaper’s records.

Police are also investigating a shooting that occurred on Saturday, April 3, after 1pm on Milton Street. A man told police he was at a residence when he was approached by a masked gunman who shot him in the thigh.

The suspect then fled on foot. The victim was taken to the hospital by a private vehicle. His condition was not known up to press time.

Anyone with information on these incidents is asked to call police at 502-9991 or the nearest police station.

Isn’t it ironic that so many young man are shot and killed whilst playing dominoes in this country? The irony being, just as domonioes fall one after each other, after the first one falls. So are the lives of young men being taken away. For example let’s say a person is shot and killed. Shortly thereafter another life is taken or several persons shot in what police calls a retaliation. Then assume someone is arrested for either or both of the two murders. Only the police has the evidence because usually there are no eyewitnesses. So the suspect(s) goes to prison and is awaiting trial. But before the trial is had, the suspect( s) is released from jail. Then in a matter of hours, days or weeks the suspect is gunned down and killed. By what police again called retaliation or, in this instance, by police. In many instances, persons killed in this fashion has maintained their innocence and looking forward to having, ‘their day in court.’ But that day never comes, because the moment they are killed, the case becomes nullified. Dead men don’t count and neither can they talk or defend themselves. And once they have Satan’s Mark on them, that of a murderer, it’s only a matter of time. And then there are the friends, family and others who have no real closure. Some go to the grave knowing thei person was innocent, but live from day to day under the cloud that the person has been charged and branded a cold blooded murderer. And whether innocent or guilty, they may have lost their life because they were accused of murder. Seems like a well organized and ongoing plot to kill out the young men in this country. And we sit and allow organized killers to take our son sand fathers and even the future of this country. Many years ago then Prime Minister, Lynden Pindling said it was time to meet with the ‘so called ‘gang leaders’ and find out what is really going on. There is only one country in the world that declared war on Black people and Muslims.

In the wild west young men would get shot while playing poker. maybe the issue lies with the young men not the game

This is "The Endless Kind Of Repeating Episode Of Murder ," thanks to the " Post-Mortem RBPF " and their lack of presence or nearby solution to prevent this silly or bizarre kind of disturbing murder happening so often out of the gate or poor communities in The Bahamas. This could be prevented by adding more Police checking point and Police Saturation on foot, cars, vehicle of all possible kind including assisted by drones with camera to patrol all ghetto communities. The priority should be prevention before solution of any crime.