Commissioner: No information to suggest police 'in any way' involved in shooting 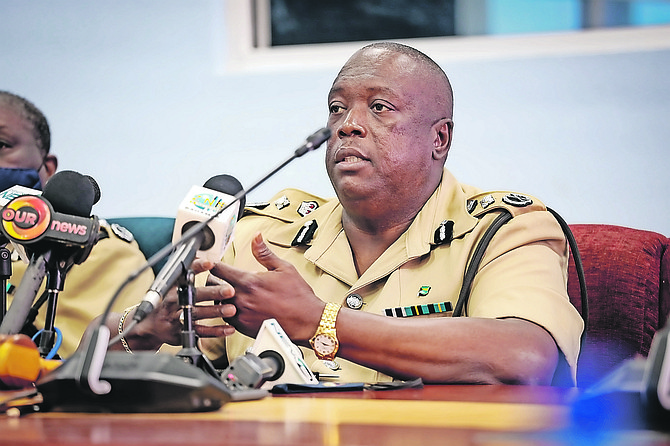 COMMISSIONER of Police Paul Rolle said there is no information to suggest the police were in “any way involved” in the mass shooting that killed six men last Thursday.

In a statement to The Tribune yesterday, he said police are concerned about the “level of misinformation being perpetrated by persons making unsubstantiated assertions”.

“Our hearts go out to the families for their loss,” the Commissioner said.

The six men were ambushed and killed during a brazen shooting at the intersection of Jerome Avenue and Chesapeake Road on Thursday afternoon.

The deceased are Renardo Bastian, also known as “Crack Teeth”, Travis Cooper, Maurice Pinder, Kendal Lord, Delano Smith, and Dequant Brown, according to relatives and close friends. The shooting came shortly after the men had been released from police custody for firearm possession.

THE bodies of the shooting victims are removed from the scene. Photo: Donavan McIntosh/Tribune staff

Yesterday, Commissioner Rolle said police are checking area CCTV videos to determine the men’s final movements before they were killed.

“The individuals were released from custody on an unrelated matter approximately two hours prior to the shooting incident and we are checking all surveillance cameras to try and determine their movement after being released,” he said.

Ricardo McKenzie, cousin of Renardo Bastian, previously told this newspaper how he watched Mr Bastian take his last breath at the scene. Yet, Mr McKenzie further claimed when they tried to get medical assistance for the wounded man, they were denied help.

Yesterday, the Public Hospitals Authority released a statement in response to allegations that at least one victim was still alive when officials were on the scene.

“The following steps as required by National Emergency Medical Services (NEMS) were followed, a scene size up was conducted and back up ambulances were requested,” PHA said. “Triage took place immediately on arrival of the EMTs to determine viability and order of treatment and transport. The first arriving team comprised two EMTs: one went to assess the female and child and the other went to assess the male victims in the car.

“All of the males were pulseless. One had agonal gasps which is not true breathing but a brainstem reflex that occurs in cardiac arrest. The female and the child displayed vital signs and were transported to hospital. The six males were pronounced dead at the scene. The EMS team that was dispatched to the scene of the mass shooting was debriefed prior to being released from work,” PHA said.

When asked about the claims, Assistant Commissioner of Police Solomon Cash said: “I can only tell you that paramedics were on the scene. They examined the bodies… and they pronounced him dead on the scene.”

Asked if the men were released from police custody due to the Royal Bahamas Police Force not having enough evidence to charge them, ACP Cash replied “yes”.

He explained: “If there’s insufficient evidence for the allegation (they are) in custody for, then we release them (pending an investigation).”

A 19-year-old woman and a two-year-old girl—the girlfriend and daughter of deceased victim Delano Smith — were also injured during the attack. They are in hospital in stable condition, at last report.

Some on social media are saying none of these executed men had a sustained source of legitimate income in recent years. Yet many of their family members are crying they were great financial providers for them and now they don't know what to do. Interesting to say the least.

Point is when anyone live a full life of being a criminal, robbing, killing and raping they develop enemies and when they create so many enemies that want them dead those enemies would do whatever it takes to make sure it happens, when it happens dont blame the government and police blame them for living the life they live amd harming innocent people. Am a parent and if i see my child have never worked in his life but bringing home large amount of money on a daily basics that would be a problem.

There needs to be strict controls on all social media. Freedom of speech is one thing spreading lies and bullshit is another. This pandemic has exposed the negatives of social media and they seem to outweigh the positives significantly. This anti vax thing is the perfect example. Imagine actually believing Bill Gates wants to kill half the planet.... That's just insane and that idiotic theory should never have taken root.

You can be a great writer because ur skilled at it👍

I honest dont know why this topic is still so popular. Children lives have been taken away from them while they were in the comfort of their own home. Innocent kids lost their lives recently and the topic and focus lasted on those kids for couple of hours but we bave harden criminals who were killed and all the focus and attention is hard on them. Where is the passion and sensitivity for the many kids that lost their lives. What exampl are we putting out there that when kids and innocent men and women are killed in cold blood and little to no focus is made but when known killers and gang leaders are kill it remain and stay the center of attention. Where was Clin Watson when those kids got killed, he spoke oma few minutes and went on attacking the system. Where are the voices for these innocent lives thats being taken away. Why do criminals have a louder loud than innocent people

@viewersmatters: In answer to the question posed by you in the last sentence of your post immediately above:

BECAUSE THE CRIMINALS AND THE FAMILIES WHO ARE DEPENDENT ON THEM ARE BEGINNING TO OUT NUMBER THE REST OF US.

Tribanon it seems like these parents refused to acknowledge and accept their sons were gangsters.

The corruption is real and most things aren't reported because they can erase the evidence and sculpture it to their likings and feed it to the crowd to blame one another for being evil. We know the politicians and that branch can be criminals too. No...it's not right for any to intentionally kill innocent ppl and they should be punished to the full extent. Back then when both parties were in power as usual, no one really enforced capital punishment. It makes me think that they also had their own hands mixed up in crime like the criminals on the street and that is why the law is slack.

Call me crazy, I think vaccines can be a huge set back in the human's reproductive system We don't know what the hell is in it, only to be a slave and have our freedom of choice mentally pressured to live through this new era of survival.

They're testing it on the population. it's literally what they're doing. They have no idea on long term impacts. The guys here even een checking to see if people ok. Dr Brennen said, nobody call us so everybody who took the vaccine is doing just fine

Ok, but you live to be blinded and accept to live on ppls term of what is the right way to live . You follow any sweet buttered words and sucked into the crowd who will accept anything that comes even if it is filled with thorns lol. Let me swallow it because THEY say it is the cure to life🙂

Bullshyte ... I’ve happily lived to a ripe old age by relying on detail and facts, not wild conspiracy theories, and by making my personal decisions accordingly. But keep upvoting your own flaky posts if it makes you feel better. 🤣🤣🤣

Living long has nothing to do with living for yourself lol. Are you mad I didn't like your comments😂🙂. I am here everyday , so get use to my flaky self liked posts. We can do this back and forth all day Sir😛

I take it you have had all the other vaccines that we are giving. The ones that means huge numbers of kids don't die before they are 5 years old? If you have why?

Well, understandably so. behind the scenes, separate and isolated from the most recent mass incident which resulted in the shooting of six men last Thursday, the Chief of the realm's Royal Constabulary, done have enough high-level " substantiated police involvement incidents" on his " already backlogged plate," be much concerned occupied with.
You can imagine how busy his officers' frequent gun firings, must be keepin' that ShotSpotter Technology equipment - so occupied with detecting the location whereabouts is the sounds gunshots coming from?
Oh, yes, who can forget, there is still the long-unsolved case of the sudden, mysteriously disappearing OBAN files? There is no real need to be making up this kind of stuff, yes?

Wouldn’t it be such a wonderful, wonderful day and country if the police were not even suspected of being involved in this horrific murder and that the commissioner did not have to come in the media to put up a defense for the police. But unfortunately society has seen the actions of the police, on numerous occasions, especially of late where young men were killed by police. And the only way to remove this cloud of suspicion from over the police force is to find the culprits, and bring them to trial before a judge and jury. And so what are the chances of that happening in this day and time? Sad to say, but it is a fact that many fear the police more than they fear the criminal element and even gangs. The commissioner must take heed from a former judge who says it’s time to end America’s FAKE war on drugs which is actually a war on the young men of this country. EIGHTY MILLION METRIC TONNES of cocaine is ‘smuggled’ into the United States annually. Mostly now through New York and California. And most of it is on licensed and legitimate cargo ships. When last did you hear of a major drug bust in any of those states?

Well, to demilitarise the Police, we will need to change more than just the letting go of eighty percent of its lower-ranked uninformed street and patrol constabulary. Yes?