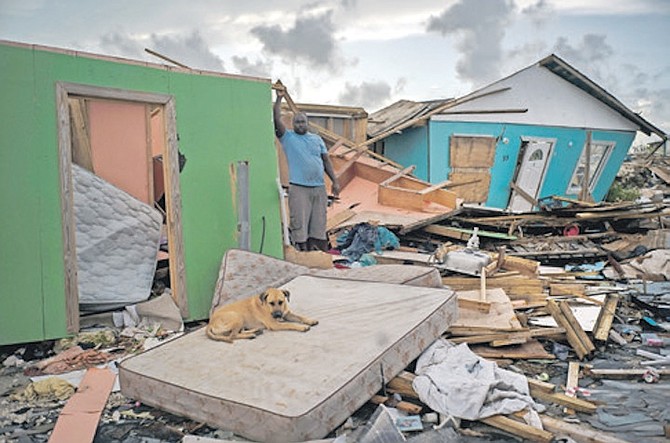 SOME of the damage in Abaco after Hurricane Dorian.

A CRIME scene investigator testified in the Coroner’s Court yesterday how he and a team of officers retrieved numerous bodies of victims who were trapped under the rubble of collapsed buildings after Hurricane Dorian in 2019.

Police Sergeant Austin Bowles said he and a team of officers from the Central Detective Unit and Crime Scene Investigation Unit were sent to Abaco to assist with recovery efforts after the monster storm hit the island, flattening homes and buildings.

His comments came during a Coroner’s Court inquest before Coroner Jeannine Weech-Gomez into the presumed deaths of people reported missing after Hurricane Dorian.

Sgt Bowles said the officers were given specific instructions as it relates to Dorian recovery efforts, though he did not detail what those orders included during yesterday’s inquest.

He said bodies were retrieved from underneath homes, trailers, churches and in some instances debris — mostly confined to the Marsh Harbour area — and were later photographed.

He also said there were times when officers used heavy duty equipment like a tractor to remove debris in order to collect the bodies, noting such equipment was used to collect those victims found beneath a church’s wall.

Asked by Coroner Weech-Gomez what happened to bodies after they were collected, Sgt Bowles said officers wrote on each victim’s body bags the date on which they were found and their locations of discovery.

He said the bodies were subsequently placed in a trailer, which he described as a makeshift morgue, at the Marsh Harbour Clinic.

Speaking of his experience, Sgt Bowles described it as being “horrible”, adding that he has never been “exposed to anything like that” in his life despite being on the force for more than 15 years.

“Anything you saw on TV was a drop in the bucket compared to what you actually saw,” he said.

Sgt Nelson Bolton also gave emotional testimony via Zoom yesterday regarding his experience during the storm.

The officer, who currently lives on Abaco, recalled how he and other officers carried out several rescue and recovery efforts on the island, assisting more than 100 people whose homes or shelters were either badly damaged or completely destroyed.

Sgt Bolton said the officers began their search and rescue operations after seeing first-hand the destruction left by Dorian, including dead bodies.

He also recounted the horror stories that were told him by locals who lost their loved ones to the storm.

“Their bodies were recovered on Don McKay Boulevard and they were placed in a refrigerator.”

Asked to describe Abaco before and after Dorian, Sgt Bolton replied: “There is no word to describe the total loss of Abaco.”

For her part, Carlene Edgecombe testified how she lost two daughters — Jendayia Edgecombe, 17, and Myeisha, eight — to the deadly storm that fatal summer.

The Tribune has previously reported how the two sisters were never seen alive again after the roof of a local church in which they had sought shelter along with their father had collapsed.

Yesterday, the Abaco resident broke down in tears on Zoom while recalling when she first received the news from her husband.

“I waited at the government complex for (several) days and was walking up and down and asking about my daughters,” she told the court.

“About three days in, I saw my husband and asked him where the girls and he shook his head and started crying and walked away.”

Mrs Edgecombe said the last time she laid eyes on her daughters were August 31, a day before the storm.

Despite reports from residents that the girls’ bodies were taken by the relevant authorities and placed in trailers, Mrs Edgecombe said she still has not seen their bodies.

She told the court she believed her daughters drowned.

Asked if she gave DNA samples to the police, Mrs Edgecombe replied: “Every time I been there, it was like police couldn’t get their act together, so I left and I been there twice.”

Police have positively identified 11 out of 47 DNA samples taken from victims who died during Hurricane Dorian almost two years ago, a forensic expert testified yesterday.

Assistant Superintendent of Police Sheria King said she and a team of officers along with a medical doctor travelled to Abaco on several occasions in the months following the storm to assist with DNA sampling and analytical work after a number of dead bodies were found on the island.

She told the court that by the end of January, the forensic lab received complete DNA profiles for 46 out of 47 samples that were submitted to an external lab for analysis.

ASP King is among dozens of people giving testimony this month for the Coroner Court’s inquest into the presumed deaths of people reported missing after Hurricane Dorian.

The senior police officer, who works in the police force’s Forensic Biology Unit, said the samples taken from unidentified victims were later compared to the reference samples of relatives who gave DNA.

She added that nine positive matches were made from the samples taken by family members.

Among them identified were Virginia Capron and Jillian Outten – who both lost their sons to the monster storm.

According to ASP King, a meeting was held last month with family members of unidentified victims to inform them of the results.

As it relates to the other two sample test results, she said they were identified as “first degree matches” or parent and child.

She continued that several samples have been received from unknown victims and family members, but have yet been sent to external labs, citing it as an “ongoing process.”

Police Inspector Altida Bowles also testified in court yesterday on the role she played in the DNA sampling process.

She explained how she assisted in recording statements and collecting DNA samples from several family members wanting to identify the bodies of their loved ones.

Asked by Coroner Jeannine Weech- Gomez how many family members she took statements from, Inspector Bowles was unable to say.

“I can’t say definitively how many family members because there were times when I would’ve taken statements from two to three different family members but at the end of the day there were 34 people were reported missing,” she said.

Dorian hit Abaco on September 1, 2019, as a Category Five storm. The storm’s official death toll is 74, however many more people remain missing.

Meanwhile the Minnis-led administration has done little if anything to prepare our fragile nation for the next major hurricane that comes our way. With hurricane season rapidly approaching, Minnis is just much too busy on the election campaign trail to be worried about the many lives that would be lost if another major hurricane hit the Northern Bahamas, especially New Providence. It's as if Minnis learned nothing at all from the Dorian catastophe. No matter how you cut it, he's certainly no leader.

Hurricane preparedness is a joke! He's actually so busy with his effort to sustain his strangle-hold on the country that he has left Abaco under a seemingly permanent curfew!